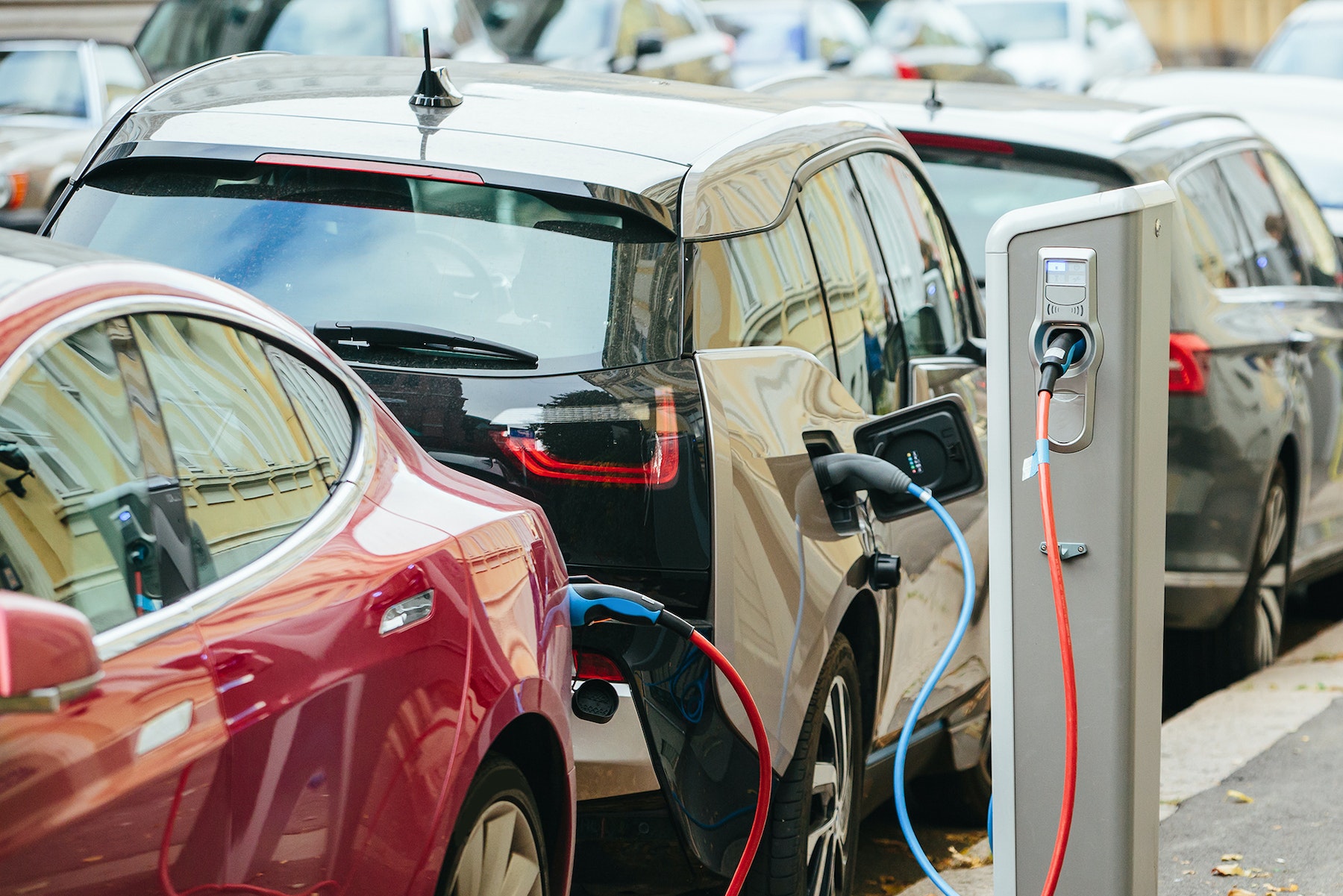 Electric vehicles are the key technology to decarbonise road transport, a sector that accounts for 16% of global emissions. Recent years have seen exponential growth in the sale of electric vehicles together with improved range, wider model availability and increased performance. Passenger electric cars are surging in popularity - we estimaate that 13% of new car sold in 2022 will be electric; if the growth experienced in the past two years is sustained, CO2 emissions from cars can be put on a path in line with the Net Zero Emissions by 2050 Scenario. However, electric vehicles are not yet a global phenomenon. Sales in developing and emerging countries have been slow due to higher purchase costs and a lack of charging infrastructure availability.

Electric car sales took off across major car markets in 2021

Sales in 2021 were the highest in China at 3.3 million (tripling 2020 sales), followed by Europe with 2.3 million sold in 2021 (up from 1.4 million in 2020). In the United States, electric car sales doubled their market share to 4.5% in 2021, reaching 630 000 sold. Across emerging markets, electric car sales more than doubled, but sales volumes remain low. In the first half of 2022 sales have further increased, we estimate that the global EV sales share will be around 13%.

The global EV fleet in 2021 consumed about 50 TWh of electricity, which accounts for less than 0.5% of current total final electricity consumption worldwide. The use of EVs displaced around 0.3 Mb/d of oil in 2021. EVs would need to displace more than 7 Mb/d of oil in 2030 to be in step with the Net Zero Scenario.

Energy density is key to ensuring that BEVs have sufficient range. The energy density of batteries for EVs has been rising over the past year, and now some of the highest performing battery cells can reach energy densities of over 300 Wh/kg, up from around 100-150 Wh/kg a decade ago – meaning that with the same mass, electric cars can now travel twice as far. This progress has been made thanks to continuous improvement in battery chemistry and cell design. Key examples of this include Tesla’s upcoming 4680 cells and LG Energy Solution’s Ultium cells.

It is not all about energy density, though. Reducing the need for critical metals is also a priority for EV innovation. The past year has seen a doubling in the market share of lithium iron phosphate (LFP) cathodes, which require no nickel or cobalt. This was in part thanks to innovative cell-to-pack technologies that enable a higher pack density by reducing pack dead weight, but mainly due to automakers switching to LFP to reduce commodity price exposure. Another key development has been the announcement of important supply chain development for sodium-ion batteries by the world’s largest battery manufacturer, CATL. This technology has the potential to completely avoid the use of critical metals. The IEA’s assessment of sodium-ion technology has increased from TRL 3-4 to TRL 6.

Battery energy density is increasing and alternative chemistries are being developed

The number of publicly accessible charging points is increasing, but deployment must accelerate

In 2021 consumers across the world spent an estimated USD 250 billion on EV purchases. The growth in EV sales is driving investment in electrification, which represented more than 65% of overall end-use investment in the transport sector in 2021. Recent analysis by the IEA estimates that this share will increase to more than 74% in 2022. Moving beyond cars, investment is also being directed towards electrification of buses and heavy-duty trucks. In early 2022 India ran a tender for the purchase and deployment of more than 5 000 electric buses across five major cities. The contract was awarded for half the price reached in previous tenders. A public–private joint venture in Chile is also seeking financing to fund an 1 000-strong electric bus fleet in Santiago.

The global production capacity of batteries is set to increase from below 200 GWh in 2019 to over 1 200 GWh in 2024, following massive capital expenditure by listed battery manufacturing companies in 2021, rebounding from a large dip during the pandemic. These companies are now investing three times as much as they did in 2020. In 2021 China led global battery manufacturing capacity by controlling around 75% of the world’s total, followed by the United States, Hungary and Germany.

Expenditure on EVs and investment in the supply chain are increasing

New zero-emission vehicle (ZEV) sales targets were announced in several markets and existing targets were intensified as governments demonstrated a strong commitment to incorporating the electrification of cars as a key component of strategies to meet net zero targets and nationally determined contributions. They include:

Several governments increased the stringency of vehicle emission standards to further facilitate ZEV deployment. The United States finalised rulings establishing more stringent standards for both corporate average fuel economy and GHG emissions. In the European Union, the European Commission’s Fit-for-55 package includes a regulation, recently passed by the European Commission, that requires fleet emission reductions (from a 2021 starting point) of 55% for cars and 50% for vans by 2030, and 100% for both by 2035. This effectively mandates that all new cars and vans sold from 2035 onward would need to emit zero tailpipe emissions.

In 2021 ZEV deployment was also supported by a sweep of announcements on funding packages to build out supporting infrastructure. Governments also announced industrial strategies that aim to create and expand their prominence within integrated supply chains, so as to futureproof their economies and support domestic production.

At COP26 in late 2021, more than 100 stakeholders including governments, automakers, investors, financial institutions and fleet owners and operators signed a declaration to accelerate the transition to 100% zero-emission cars and vans globally by 2040, and by no later than 2035 in leading markets. Signatories leading in EV deployment have committed to strengthening international support for emerging economies, including the provision of technical assistance, finance and capacity building. This landmark global agreement builds on the existing Electric Vehicle Initiative EV30@30 campaign launched in 2017. With the support of 15 countries and more than 20 companies and organisations, the campaign sets a collective goal of EV sales to achieve a market share of 30% by 2030 (including cars, buses and trucks).

In 2021, 15 countries (representing roughly 5% of global medium- and heavy-duty vehicle sales) announced support for the Global Drive to Zero Campaign and programme. These countries demonstrated their support by committing to the first global Memorandum of Understanding on Zero Emissions Medium- and Heavy-Duty Vehicles. Signatories intend to work together to achieve 2030 and 2040 targets for new ZEV truck and bus sales. Progress towards these goals will be reported annually and signatories are to develop plans to support their ambitions.

Increasingly, automakers have been exploring electrification plans to both comply with policy regulations and maintain a competitive position in a transitioning market. In 2021 several major automakers announced ambitions to achieve a fully electric future. In the coming years the development of a wider range of models and more competitive pricing is anticipated.

As the electric car market matures, reliance on direct subsidies must decrease and eventually be phased out. Budget-neutral feebate programmes – which tax inefficient internal combustion engine vehicles to finance subsidies for low-emission or EV purchases – can be a useful transition policy tool. Stringent vehicle efficiency and/or CO2 standards have promoted EV adoption in most leading EV markets and should be adopted by all countries seeking to hasten the transition to electromobility.

Electric buses and trucks are becoming competitive on a total cost-of-ownership basis across an increasing number of applications. Policy-led deployment can help kickstart this sector. ZEV sales mandates, purchase incentives and CO2 standards can all help speed up the transition.

Electrification of road transport in emerging and developing economies should prioritise two/three-wheelers and urban buses, as these vehicle types are the most cost-competitive. Price signals and charging infrastructure availability can also help the economic case for electrification.

In emerging EV markets, efforts should be made to establish and tighten fuel economy and emission standards, and to facilitate electric grid development.

Governments should continue to support the deployment of publicly available charging infrastructure at least until there are enough EVs on the road for an operator to sustain a charging network. Continued government support, either through regulations requiring the building out of charging stations or through fiscal policies and support, should ensure equitable access to charging for all communities to ensure that nobody is left behind in the transition. Incentivising and facilitating the installation of home chargers in existing parking spaces is important. Co-ordinated plans on grid expansion and enhancements, including digital technologies to facilitate two-way communication and pricing between EVs and grids, are needed now to ensure that EVs can become a resource for grid stability rather than a challenge.

Electrifying road transport requires a wide range of raw material inputs. While all stages of the supply chain must scale up, extraction and processing is particularly critical due to long lead times. Governments must leverage private investment in the sustainable mining of critical battery metals and ensure clear and rapid permitting procedures to avoid potential supply bottlenecks. Innovation and alternative chemistries that require smaller amounts of critical minerals, as well as extensive battery recycling, can ease demand pressure and avoid bottlenecks. Incentivising battery “rightsizing” and the adoption of smaller cars can also decrease demand for critical metals. Governments should ensure the traceability of key EV components and monitor progress of ambitious environmental and social development goals at every stage of battery and EV supply chains.

Automaker partnerships can be pursued to diffuse risk and advance rapid developments in technology and manufacturing. Such collaborations can efficiently utilise collective resources in the race to deliver affordable EVs on a global scale. Partnerships between Ford and Volkswagen and between General Motors and Honda aim to leverage each other’s technology and sourcing to co-develop a range of EV models.