Climate change is resulting in rising global temperatures, erratic patterns of precipitation, sea level rise and more frequent or intense extreme weather events. This has significant implications for electricity security. For generation, the impacts of climate change can reduce the efficiency and alter the availability and generation potential of power plants, including both thermal and renewable facilities. Climate change impacts on transmission and distribution networks can result in higher losses, changes in transfer capacity and particular physical damage. It is also expected to increase electricity demand for cooling in many countries, which will become a driving factor for generation capacity additions.

The electricity system is witnessing increasing pressure from climate change

Increasing anomalies in climate patterns already pose a significant challenge to electricity systems and increase the likelihood of climate-driven disruption. In many countries the increasing frequency or intensity of extreme weather events such as heatwaves, wildfires, cyclones and floods are the dominant cause of large-scale outages. The recent outages due to wildfires and heatwaves in California and Australia demonstrate that electricity systems are already exposed to and largely affected by climate hazards. In the United States the share of extreme weather events attributable to large-scale outages (affecting at least 50 000 customers) over the past two decades has been on average 90%, with at least 75% across the period and all (if not almost all) of the events in certain years.

The increasing adverse impacts of a changing climate on electricity systems highlight an urgent need for action by policy makers, utilities and relevant stakeholders around the world to enhance their systems’ resilience to climate change. Adoption of climate resilience not only reduces damage and loss from climate impacts, but also supports clean energy transitions, which themselves can limit future adverse climate change by deploying low-carbon energy technologies. 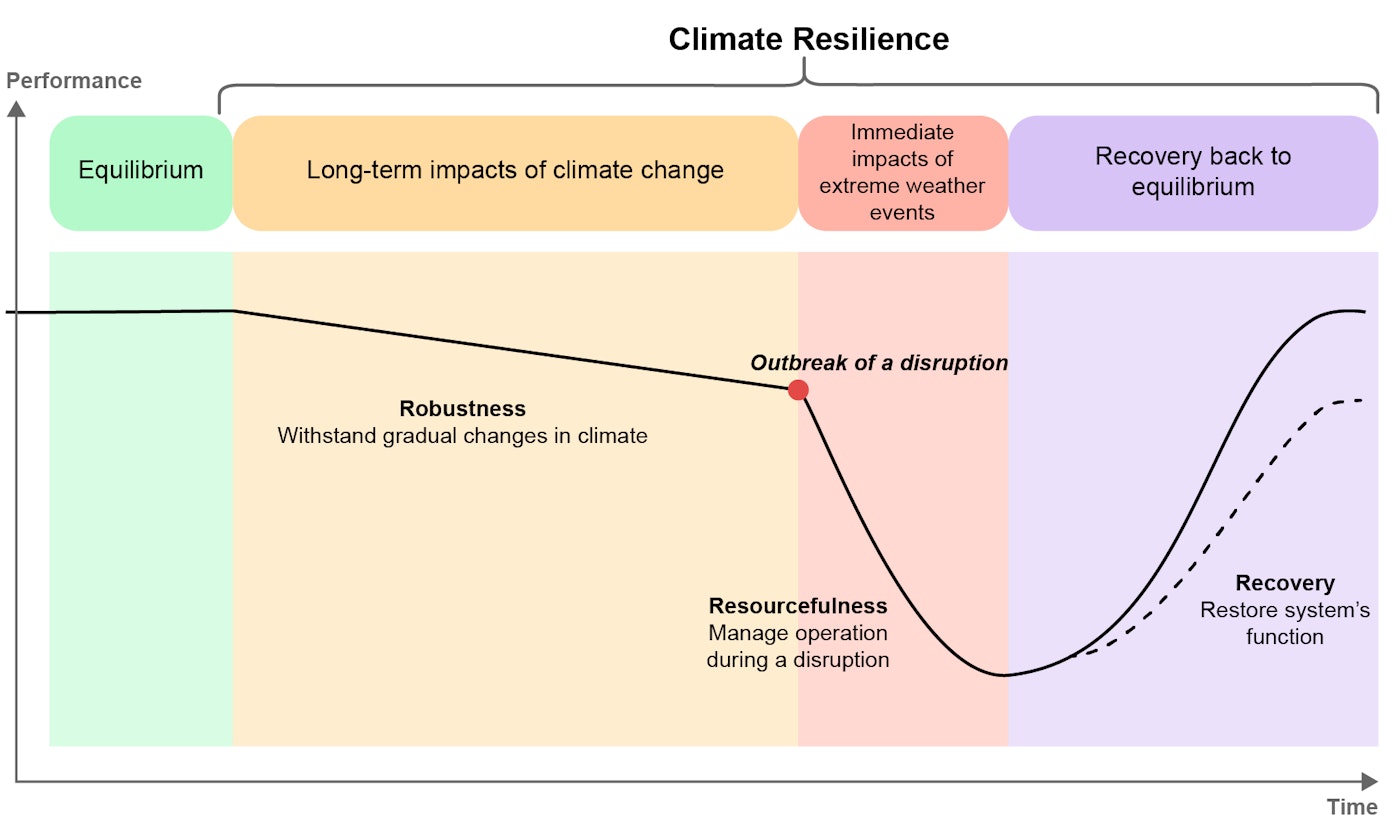 Robustness is the ability of an energy system to withstand the gradual long-term changes in climate patterns and continue operation. For example, thermal power plants that use recirculating water for cooling could be more resilient to increasing temperatures than those that use external sources such as rivers or lakes.

Resourcefulness is the ability to continue operation during immediate shocks such as extreme weather events. For example, a hydropower plant with a flood control reservoir is more likely than others are to sustain a minimum acceptable level of operation in the face of floods.

Recovery is the ability to restore the system’s function after an interruption resulting from climate hazards. A more resilient electricity system with a well-coordinated contingency plan for communications, temporary assets and workforce will recover faster from the interruptions caused by climate impacts.

Recent studies suggest that the benefits of resilient electricity systems are much greater than the costs in most of the scenarios considering the growing impacts of climate change. It is estimated that for every dollar invested in climate-resilient infrastructure, six dollars can be saved. According to the World Bank, if the actions needed for resilience are delayed by ten years, the cost will almost double.

For instance, underground transmission and distribution cables, which require a higher upfront outlay than above-ground systems, can significantly reduce potential damage from climate impacts and save recovery costs. Transmission and distribution lines above ground tend to be more vulnerable to climate hazards such as high-speed winds, wildfires, floods and landslides, than underground systems. When storm Gudrun hit Sweden in January 2005, outages in rural areas lasted up to 20 days due to the damaged distribution lines, while those in urban areas with underground cabling lasted only a few hours. Due to the lengthy outages, Swedish network operators lost around EUR 250 million. Moreover, the socio-economic losses due to the interruptions were estimated at EUR 3 billion.

Governments can support efforts to reduce the damage and cost of climate impacts by introducing tailored measures aimed at the specific types of climate hazards they are facing. In California, where wildfires are a major threat, good forest maintenance can minimise the impacts of wildfires on transmission and distribution lines. In Bangladesh, a country highly prone to floods, USD 560 million for additional flood protection could save up to USD 1.6 billion in avoided damage.

In Zambia, for instance, where only 30-40% of the population have access to electricity (World Bank, 2020), the electricity system is already adversely affected by climate change. A shorter rainy season and more frequent droughts are posing a challenge to hydropower generation which currently accounts for more than 80% of electricity generation in Zambia. In February 2016 the water levels of the Kariba Dam, the biggest electricity source of Zambia, dropped by 88%, prompting blackouts, power rationing and a slowdown in economic development in some places. The disruption occurred again in August 2019, when the Kariba station needed to reduce output and impose daily blackouts. The adoption of climate resilience measures, such as an improved system for monitoring climate hazards and a strategy for diversifying the electricity generating mix, would help Zambia to ensure reliable access to power networks.

Electricity plays a critical role in the transition to a low-carbon energy system. A lack of resilience in electricity systems can also obstruct clean energy transitions, as some renewable energy technologies could be sensitive to a changing climate. This is especially the case in countries whose electricity infrastructure is vulnerable to changes in climate and extreme weather events.

The benefits of climate resilience and the costs of climate impacts tend to be distributed unevenly across the electricity value chain. It inevitably raises the question of who should be responsible for delivering resilience measures and pay for them.

In principle, power sector businesses have responsibility and direct interest in protecting their own assets and providing reliable services to their customers. While some utilities have taken efforts to align their business interests with climate adaptation efforts, there are several factors that may deter some from adopting resilience measures in practice.

First, the benefits of investment in enhancing climate resilience are likely to become tangible only after a few years or even decades, while the capital cost of implementation is incurred immediately. Second, when climate impacts interrupt electricity supply and lead to large costs to society, generators and operators are expected to bear only a fraction of the entire social costs. Third, a lack of competition and the presence of monopolistic market conditions in some countries could discourage service providers from investing in climate resilience measures for enhanced quality of electricity services.

Therefore, policy makers need to fulfil a critical role in building resilient electricity systems by adopting effective policy measures that can prevent a potential “market failure”, while collaborating with business.

Countries that have not yet incorporated climate resilience as a core element of their national strategies and plans to adapt to climate change, need to act immediately. Mainstreaming climate resilience in energy and climate policies can send a strong signal, encouraging the private sector to consider climate resilience of electricity systems and address potential market failures.

Building a clear assessment framework for climate impacts and resilience is the first step to ensure all stakeholders properly understand projected changes in climate. After establishing a common assessment framework, policymakers need to send appropriate signals to essential service providers. They can encourage utilities to include climate resilience in their construction plans and operational regimes by mainstreaming climate resilience as a core element in their own long-term energy and climate policies. Identification of cost-effective resilience measures and creation of an incentivisation mechanism would also encourage utilities to adopt resilience measures. With supportive policy measures, businesses can implement resilience measures, such as physical system hardening, improvement in system operation, recovery planning, and capacity building.