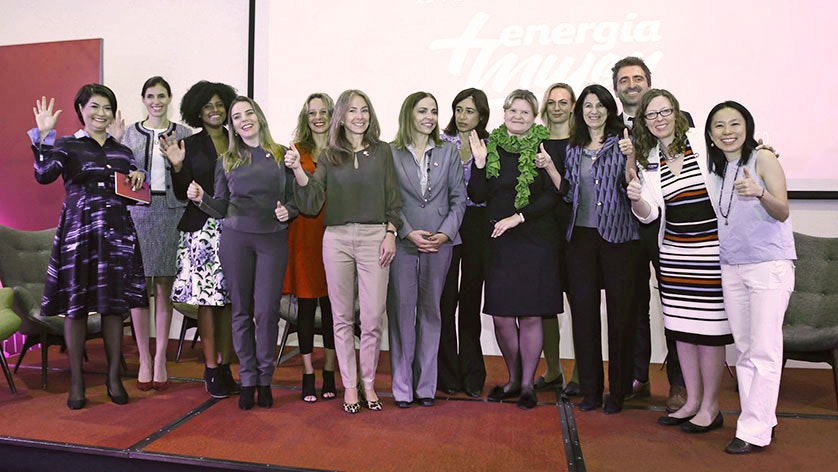 The IEA is also committed to supporting gender diversity in the energy sector and recognises the critical role diversity plays in innovation and accelerating the clean energy transition (Photograph: IEA)

As part of its “Energia + Mujer” programme, Chile’s Ministry of Energy last week held an international conference to promote the participation of women in the clean energy sector, with the support from the Ministry of Women and Gender Equality, the Ministry of Foreign Affairs and the International Energy Agency (IEA).

The event brought together more than 180 participants from industry, government, academia and other organisations to share domestic and international experiences on how to overcome challenges on increasing the participation and leadership of women in the sector. The conference was inaugurated by Chile’s Minister of Energy, Susana Jiménez and Minister of Women and Gender Equality, Isabel Plá.

The Chilean government recognises the fundamental role women play in meeting the challenges of the energy sector and is taking action to achieve its twin goal of developing its domestic energy potential while at the same time integrating more women into the sector. The IEA is also committed to supporting gender diversity in the energy sector and recognises the critical role diversity plays in innovation and accelerating the clean energy transition.

“We believe that Chile’s development will be stronger incorporating the talents of all its inhabitants, especially the energy of its women. The Ministry of Energy will incorporate this objective within its 2018-2022 Energy Roadmap,” said Minister Jiménez.

The conference launched the “Energia + Mujer” public-private partnership to better understand the barriers women face in pursuing a career in the energy sector. It aims to develop an action plan, in March 2019, to overcome these challenges. According to a 2017 project with 48 energy companies, the energy sector is one of the least gender diverse in Chile, with a participation rate of women of just 22%, and only 12% of company board directors and CEOs held by women.

Chile, which has rapidly rising shares of renewable electricity in its energy mix thanks to the highest solar radiation in the world, is also showing how women can contribute and benefit from the clean energy transition. In the north of Chile, a solar company is breaking down gender barriers with an all-women workforce manufacturing mirrors for solar thermal electricity plants and showing how clean energy innovation is opening up opportunities for women to contribute to the rapidly changing energy sector.

The Clean Energy, Education and Empowerment Technology Collaboration (C3E TCP), which seeks to promote higher participation of women in the clean-energy sector also supported the conference with its member and observer countries sharing their experiences.

Established in 2017 under the IEA’s Technology Collaboration Programme, the C3E TCP is now a joint initiative of the IEA and the Clean Energy Ministerial.  Its membership now includes seven countries (Australia, Austria, Canada, Czech Republic, Finland, Italy and Sweden) with Chile about to join next.

Improving gender diversity has been a central pillar of the IEA’s modernisation strategy since 2015 and those efforts are now bearing fruit. For example, the Agency has reported notable increases in the share  of women among its professional staff as well as the share of applications from women for vacancies. Also there has been a significant increase in the share of women in the IEA’s management team. The IEA will continue to implement measures to improve gender equality and make the agency an attractive workplace for both talented men and women.

The IEA C3E Fellowship is one such programme that aims to encourage more women to pursue careers in clean energy as well as to raise the attractiveness of the IEA for female candidates. The fellowship provides a talented female student the opportunity to gain work experience at the IEA and will soon welcome its first C3E fellow. Improving the visibility and attractiveness for women to pursue a career in the energy sector combined with recognition of the important role diversity plays in innovation will help to achieve our global goals of a clean energy transition.

International collaboration at both the public and private levels will also be an important enabler to achieve gender equality in the energy sector and the IEA is pleased to be a key partner in the Equal by 30 Campaign which aims to spur government and private sector commitments and actions to achieving the Sustainable Develop Goal of gender equality by 2030 (SDG5).

At the G7 Energy Ministers’ meeting held under Canada’s Presidency in September 2019, all G7 countries unanimously signed onto the Equal by 30 Campaign bringing the number of country signatories to 9 and joining over 30 of the world’s leading energy companies in taking action to achieve gender equality.