The GlobalABC Roadmap for Buildings and Construction in Latin America sets out targets and timelines towards achieving zero-emission, efficient and resilient buildings and construction between 2020 and 2050 in Latin America. The roadmap covers eight themes: urban planning, new buildings, existing buildings, building operations, appliances and systems, materials, resilience, and clean energy. For each of these themes, priority actions related to policy and technology are identified as well as other enabling activities, including capacity building and finance. This Roadmap was developed in collaboration with the GlobalABC and United Nations Environment Programme (UNEP). Several hundred building sector actors from across the region participated through consultations in webinars, questionnaires and workshops.

With the Paris Agreement countries have agreed to a common goal of maintaining the global temperature increase to well below 2 degrees, and preferably no more than 1.5 degrees, by the end of the century. According to the latest UNEP Emissions Gap report, to be on track for the 1.5 degree goal, the world needs to reduce global emissions by over 50% by 2030 and work towards carbon neutrality by 2050. As the buildings and construction sector accounted for 36% of final energy use and 39% of energy and process-related carbon dioxide (CO2) emissions globally in 2018, it will have to play a major part in achieving this vision.

In 2018, the buildings sector In Latin America accounted for 24% of final energy use and 21% of process-related carbon dioxide (CO2) emissions, excluding emissions from manufacturing building materials and products such as steel, cement and glass (IEA, 2019a). Since 2010, energy demand has grown by 14% and emissions by 18%.

Since 2010, growth in energy demand and emissions has been driven by a 10% increase in regional population and 26% increase in wealth (gross domestic product), which has driven floor area growth, along with a greater demand for energy services (IEA, 2019a). By 2040, Latin America’s population is expected to grow by a further 20% and could increase its economic wealth by 83%.

According to the World Energy Outlook, energy efficiency and decarbonisation of electricity in buildings in Latin America under a Sustainable Development Scenario could reduce annual emissions from buildings in 2040 by almost 140 megatonnes of carbon dioxide (MtCO2) compared to a Stated Policies Scenario . Such measures could in fact reduce emissions from buildings by 51% from 2018 levels, while accommodating a 6% increase in energy demand (IEA, 2019b).

Achieving these outcomes at pace and scale will require greater collaboration among policy makers at all jurisdictional levels, as well as with urban planners, architects, developers, investors, construction companies and utility companies. In addition to providing healthier, more resilient and more productive environments, the decarbonisation of the buildings sector presents a business opportunity in Latin America and the Caribbean with an estimated value of approximately USD 4 trillion by 2030 (IFC, 2019). Decarbonising buildings is also in full alignment with the aims of SDG 12, to ensure sustainable consumption and production patterns.

Latin America is home to 624 million people and presents high rates of urbanisation, with over 80% of its population living in cities (UN DESA, 2019). Cities and countries in the region face challenges like urban sprawl and fragmentation, lack of public infrastructure, expansive areas of informal settlements and high percentage of population living in inadequate housing, located in vulnerable areas (The World Bank, 2014b). This is aggravated by the high levels of informality in the construction sector, with self-construction being a common practice.

Despite the high demand for new residential buildings, in many countries, progress on building energy codes is slow (IEA, 2019a; GlobalABC/IEA/UNEP, 2019). Only 6 out of 33 countries in Latin America and the Caribbean had mandatory or voluntary 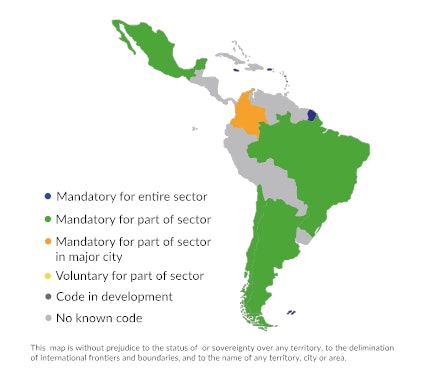 These maps are without prejudice to the status of or sovereignty over any territory, to the delimitation of international frontiers and boundaries, and to the name of any territory, city or area.

The purpose of this roadmap is to set up a framework for the buildings and construction sector to support a common language and vision for the complete decarbonisation of buildings across their life cycle, and to support the development of national or subnational strategies and policies, including, for example, nationally determined contributions (NDCs).

Developed in consultation with over 250 stakeholders and buildings experts across the region, this roadmap outlines the range of actions that different actors can take in the short, medium and long term to achieve a built environment that is zero-emission, efficient and resilient.

It covers eight “activities”: urban planning, new buildings, existing buildings, building operations, appliances and systems, materials, resilience, and clean energy, and for each of these proposes key actions, targets for policies and technologies, and enabling measures with the aspiration of reaching net-zero carbon emission buildings by 2050..

The timelines in Figure 2 describe the actions identified by stakeholders as being key to delivering zero-emission, efficient and resilient buildings in Latin America by 2050. The sections “Activities 1‑8” and “Roadmap support: Enablers” develop the strategies that support the delivery of these objectives.

Getting to zero-emission, efficient and resilient buildings by 2050 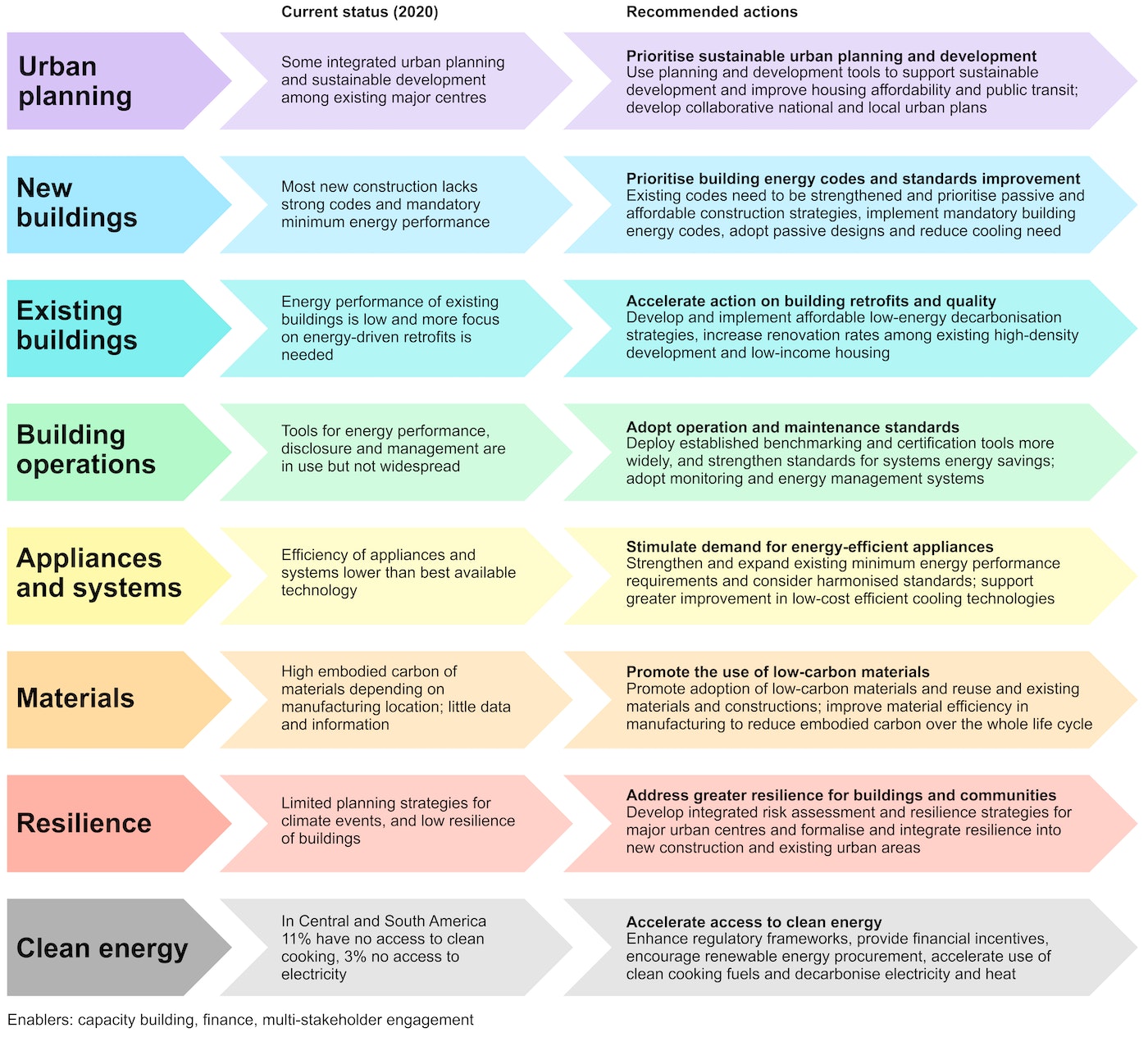 National ministries and city agencies should develop ambitious, comprehensive strategies and roadmaps to outline the pathway to a zero-emission, efficient and resilient buildings and construction sector. These strategies should be developed through consultation and engagement, address the multiple disciplines of urban planning, new and existing buildings, and resilience and clean energy. New development will need to address integration with existing housing stock and infrastructure, and improved transit-oriented design and better services to low-income households. A key to this is to address the data and ambition gaps identified in this roadmap.

Governments and industry coalitions should work to close key information gaps by establishing data collection systems and methodologies, which can provide essential evidence to inform decarbonisation and efficiency planning, as well as highlight the concrete, quantifiable benefits of efficiency and sustainability interventions.

Ministries should also develop national and local renovation and financing strategies to accelerate implementation and achievement of decarbonisation and efficiency goals, such as increasing the annual energy efficiency renovation rate to 2% by 2040.

Local agencies should undertake risk mapping and resilience assessments and develop integrated strategies to improve the resilience of the building stock. Agencies should develop strategies to address resilience risks in existing low-income dense developments to inform zoning and building performance standards, engaging with the relevant disciplines. It is equally critical to map and develop strategies for adapting existing buildings to mitigate against extreme climate events and changes in climate conditions.

National roadmaps and strategies set priorities for the sector

Regulators can reduce future energy demand in new buildings through ambitious and progressive mandatory energy codes that focus on highly efficient and net-zero carbon emissions for new construction within the next decade. Focal areas should include replicable and locally adapted strategies for mitigating heating and cooling demand that address the wide variation in Latin American climates, such as passive design, natural ventilation, insulation, shading and low-emissivity windows.

Regulators should expand and strengthen minimum energy performance standards (MEPS) to set ambitious product energy performance requirements covering all major appliances and systems. MEPS could be especially effective if developed in collaboration across the region to enable cross-border applicability.

Expand existing energy ratings and labelling programmes within the region and align performance metrics to support improvements in building and appliance energy efficiency and complement mandatory energy codes and MEPS.

National and local agencies should develop ambitious regulatory and incentive frameworks to increase investment in energy efficiency improvements and reduce carbon emissions from the production of major building materials produced across the region.

National and local agencies should develop clear regulatory and incentive frameworks to promote the use of on-site and building-integrated renewable energy including solar photovoltaic, solar thermal and advanced biofuels where appropriate. New frameworks that define operational rules, remuneration schemes, incentives allocation, integration mechanisms and goals at national and local levels will support the broader deployment of Latin America’s opportunity to capture its considerable solar resources.

Governments and large organisations can take leadership in zero-carbon procurement and standards to promote investment in low-carbon building construction and renovation and encourage the adoption of efficient technologies at scale.

Governments, industry coalitions and civil society should promote the multiple benefits that zero-emission, energy-efficient and resilient buildings have for different stakeholders. By identifying and reporting how multiple benefits can improve aspects such as jobs, economic growth, health, poverty alleviation, environmental quality and security of buildings, a broader buy-in from stakeholders can be achieved.

Narratives and engagement to drive demand

Governments and industry coalitions should promote opportunities for capacity building on topics including embedding circular economy concepts into buildings through life-cycle approaches, data collection for efficiency improvement, reuse of construction materials and phasing out refrigerants with high global warming potential.

Government and industry coalitions should promote the adoption of existing efficient building construction and operation techniques and low-cost technologies that can improve building performance and lower embodied carbon.

Address key information gaps by collecting data and evidence to support actions to decarbonise and improve the efficiency of buildings. Across Latin America, information is lacking on integrated and spatial urban planning policies and activities; informal development activities; the use of space and water heating technologies; uptake of smart devices; the use, energy and carbon content of materials; risk mapping; and decentralised renewables deployment. Putting in place systems to capture this information will allow for greater certainty around the impacts that policies and markets are having.

Raise the level of ambition on actions that can support improved building performance and construction methods that match the scale of development change. There is a reported lack of ambition in advancing the use of spatial planning approaches, passive design principles and low-energy building system technologies, building code adoption and compliance, building labelling and benchmarking, use of audit and building management tools, and integrated building renewables. Increased efforts towards making new and existing buildings across Latin America zero-emission, efficient and resilient should look to harness the wave of investment and construction across the region in coming years.

Excludes Mexico in the following figures. Within International Energy Agency (IEA) modelling, Mexico is grouped with the North American region. Where possible, Mexico has been shown separately.

Full references for the data behind IEA figures and/or tables featured on this page can be found in the PDF of the full report.

GlobalABC Regional Roadmap for Buildings and Construction in Africa 2020-2050

GlobalABC Regional Roadmap for Buildings and Construction in Asia 2020-2050

GlobalABC Roadmap for Buildings and Construction 2020-2050