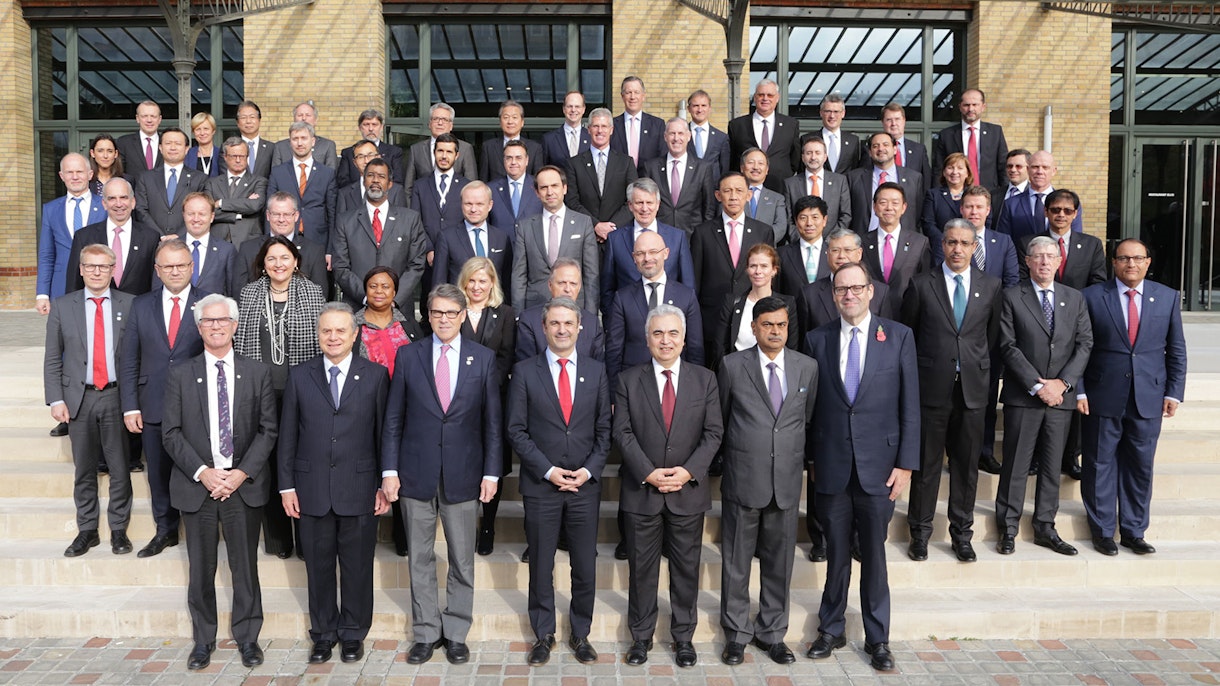 Ministers and top government officials from the IEA’s 29 member countries, seven Association countries and other partners, as well as more than 30 CEOs from energy industry met in Paris on 7-8 November 2017 (Photo: Andrew Wheeler, IEA)

Ministers and top government officials from the International Energy Agency’s 29 member countries, seven Association countries – Brazil, China, India, Indonesia, Morocco, Singapore and Thailand – and other partners, as well as more than 30 CEOs from across the energy spectrum, met in Paris this week for the IEA’s 2017 Ministerial Meeting.

Held under the chairmanship of Ibrahim Baylan, Sweden’s Minister for Policy Coordination and Energy, the meeting highlighted the IEA’s role as the world’s leading energy authority and a global hub for clean energy. In line with the IEA’s strategy to open its doors to emerging countries, IEA Ministers invited Mexico as the agency’s 30th member.

The theme of the two-day meeting was “Bolstering energy security for sustainable global growth.” It provided a unique opportunity for governments and industry to discuss major energy issues, including how to create the right conditions for energy investments and building a framework for 21st-century energy markets, stimulating energy and technology innovation, and examining the transformative potential of digital technologies on energy systems in coming decades.

The meeting allowed IEA ministers to review steps the agency should take to extend its modernization mandate, an agenda laid out at the last ministerial meeting, in 2015, by Dr Fatih Birol, the IEA’ executive director. It is based on three pillars: expanding the IEA’s mandate on energy security beyond oil to natural gas and electricity; opening the agency’s doors to emerging countries; and turning the IEA into a global clean energy hub, including for energy efficiency.

IEA ministers expressed strong support for the progress made over the last two years, and endorsed further work in each of the agency’s three pillars, strengthening the dialogue with industry, and continuing its emphasis on digitalization will impact the energy sector.

“Our ministerial meeting brought together the countries and companies that are the key decision makers in the world’s energy sector,” said Dr Birol. “Their participation recognizes the importance of a truly global energy dialogue between government and industry, as well as the high level of shared interest in the wide range of issues on the global energy agenda today.”

Various events were also held centred around the ministerial meeting. The first was focused on women in clean energy through the Clean Energy Education and Empowerment (C3E) programme. This initiative is intended to raise awareness among public and private decision-makers on the need to promote women’s leadership and participation in the energy sector.

The IEA announced its Clean Energy Transitions Programme, a new multi-year, multi-million euros plan to support clean energy transitions around the world. Backed by several member countries committed to promoting the development of clean energy, the new Programme is intended to leverage the IEA’s unique energy expertise across all fuels and technologies to help accelerate global clean-energy transitions, particularly in major emerging economies.

The International Energy Agency was founded in 1974 to help its member countries co-ordinate a collective response to major oil supply disruptions. Its mission has evolved and today it rests on the three pillars of its modernization agenda. The IEA family now accounts for more than 70% of global energy consumption, up from less than 40% in 2015.

For a detailed overview of the Ministerial outcomes, download the Chair's Summary from Minister Baylan.