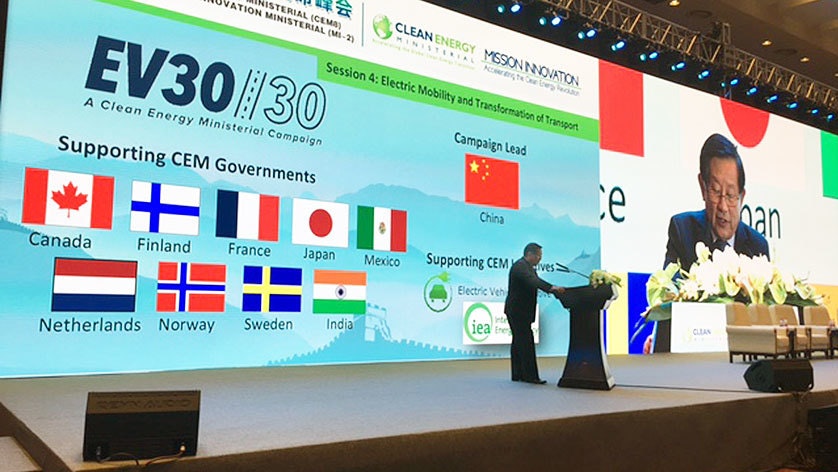 BEIJING – The Clean Energy Ministerial (CEM) announced a new campaign called EV 30@30 to speed up the deployment of electric vehicles and target at least 30 percent new electric vehicle sales by 2030.

The campaign will support the market for electric passenger cars, light commercial vans, buses and trucks (including battery-electric, plug-in hybrid, and fuel cell vehicle types). It will also work towards the deployment of charging infrastructure to supply sufficient power to the vehicles deployed.

The CEM Electric Vehicle Initiative (EVI) recognizes the importance of reducing carbon emissions in the transportation sector, which account for almost a quarter of global greenhouse gas emissions and is one of the fastest-growing energy end use sectors. It also recognizes the importance of working towards energy efficiency and the mitigation of air pollution from transportation. These environmental, economic and social goals can be addressed through the accelerated electrification of the transportation sector.

The new sales target will apply collectively to the CEM-EVI membership, and not to individual countries. Governments who endorse the goal show leadership by establishing policies to reach the target and engage through EVI to report progress and share best practices.

The global electric car stock reached more than 2 million vehicles in 2016, after crossing the million-car threshold in 2015, according to the latest Global EV Outlook report. Still, the scale achieved so far remains small. The global electric car stock currently accounts for just 0.2% of the total amount of passenger light duty vehicles in circulation.

“Despite the progress so far, electric vehicles still have a long way to go before reaching a scale that would make a significant dent in global oil demand growth and greenhouse gas emissions,” said Dr Fatih Birol, the executive director of the International Energy Agency. “But the Electric Vehicles Initiative’s latest campaign can provide a significant boost to this critical market.”

The new campaign aims to galvanize public and private sector commitments for EV fleet procurement and deployment, strengthening the work begun with the EVI Government Fleet Declaration for public fleets, and reaching out to businesses for commitments on the electrification of private fleets.

It also seeks to expand research on the scale up of EV deployment, including such topics as policy efficacy, barriers to adoption, the electrification of public transportation, grid integration and load management, and synergies with automated, connected and shared vehicles. It will also establish a Global EV Pilot City program to reach 100 electric vehicle-friendly cities around the World over five years.

The announcement was made during the 8th Clean Energy Ministerial (CEM8) held in Beijing on 6-8 June.

The campaign is organized by the CEM-Electric Vehicles Initiative, coordinated by the International Energy Agency.

The CEM is a unique partnership of 25 key countries, including most of the G20 economies, representing 90% of clean energy investment and working together to accelerate the global energy transition.

Canada recognizes the key role electric vehicles will play in reducing emissions from the transportation sector, which will help us achieve our climate change and clean growth objectives while driving the economy.

The Paris Climate Agreement of 2015 gives a boost to the ambitions of the Netherlands in e-mobility, the transition to renewable energy and business opportunities in the field of charging infrastructure and the automotive sector. It’s our goal to have 100% of all new registered cars in 2035 being zero-emission cars. In 2016 the Netherlands had a market share of new registered electric cars of 6.4% - the largest in the European Union.

Sweden intends to become one of the world's first fossil-free welfare nations. To reach that ambition it is absolutely crucial to reduce the emissions from the transport sector nationally as well as globally. International cooperation, such as the promotion and support to electric vehicles through the EVI, is an important part of the work to reduce the emissions from transport.

We need to see a rapid, global shift towards electric cars and other vehicles. This is not only so we can cut carbon emissions and reduce climate change, but also because urban air pollution is one of the world's biggest killers and a major public health emergency.

We want all countries to join this campaign and promote electric mobility. UN Environment is supporting close to fifty countries and cities around the world to make this positive change, and will support where we can in order to push policy change. Our lungs and our planet depend on our collective leadership.

The Climate Group is excited to see the continuous growth of momentum for electro-mobility from both governments and business. We welcome the collective ambition and the concrete implementing actions set out by the CEM EVI’s 30@30 initiative, and look forward to collaborating closely with the governments and other stakeholders involved to build dialogue and knowledge sharing between public and private stakeholders and leverage the role corporate demand can play in driving EV uptake.

Raised ambitions are needed now more than ever before as we unite in collective intent to build a better future. The world is on a mission to bend the curve of greenhouse gas emissions by 2020 and we can’t be late. To ensure we collectively reach that turning point a series of milestones must be met, including zero-emission transport being the preferred form of all new mobility in the world’s major cities and transport routes by 2020.

Reaching that crucial milestone will help ensure that EV30@30 becomes reality: it is necessary, desirable and most importantly achievable.

The 30@30 initiative has the potential to be a game changer for transport’s contribution to the Paris Agreement on Climate Change. The Partnership on Sustainable, Low Carbon Transport (SLoCaT) will actievly support the EV30@30 campaign in the Marrakech Partnership on Global Climate Action of the United Nations Framework Convention on Climate Change (UNFCCC), where SLoCaT operates as thematic coordinator for transport.