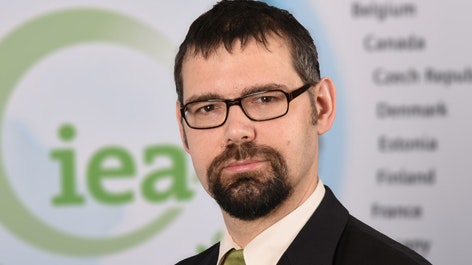 Laszlo Varro, a Hungarian national who has worked at the IEA since 2011, has been named the Agency’s new Chief Economist. He succeeds the former IEA Chief Economist, Fatih Birol, who took over as IEA Executive Director on 1 September 2015.

Prior to assuming his new role, Varro served as IEA Head of Gas, Coal and Power Markets. In this post he was responsible for gas market and supply security analysis, LNG markets, gas market reforms and infrastructure policy. He led the Electricity Security Action Plan, the IEA work programme that provides a comprehensive coverage of the policy, market design, infrastructure regulation and investment aspects of maintaining electricity security during the transition to a low-carbon power system. He was also responsible for formulating the IEA position on reconciling power generation financing policies with climate policy objectives.

Until 2011 Varro was the Director for Strategy Development at MOL Group, a publicly quoted independent energy company headquartered in Budapest. From 2000 to 2005, Varro worked as the Head of Price Regulation at the Hungarian Energy Office where his main projects were unbundling and network tariff setting, introduction of the first feed-in tariffs for renewables in Hungary as well as restructuring power purchase agreements during market liberalisation.

In his new role, Varro will lead the Economics and Investment Office (EIO), a newly created group within the IEA that aims to provide sound and consistent energy economics and methodological support for the Agency’s work. EIO will also provide strategic support for the Executive Director’s agenda.

Working closely with all relevant IEA offices, EIO will provide comprehensive coverage of investment in the energy sector, including the market and policy drivers of investment, investment impact of regulatory and market design measures as well as the energy security and climate change implications of the investment process.

EIO will also co-ordinate the Agency’s industry relations, including the activities of the Energy Business Council, the IEA’s main engagement platform with the private sector.

Varro started his economist career at the National Bank of Hungary after completing his graduate degree at the University of Cambridge and the Corvinus University of Budapest.

Founded in 1974, the International Energy Agency was initially designed to help countries co-ordinate a collective response to major disruptions in the supply of oil. While this remains a key aspect of its work, the IEA has evolved and expanded. It is at the heart of global dialogue on energy, providing authoritative statistics and analysis. The IEA examines the full spectrum of energy issues and advocates policies that will enhance the reliability, affordability and sustainability of energy in its 29 member countries and beyond.

With only 2% of governments’ recovery spending going to clean energy transitions, global emissions are set to surge to an all-time high