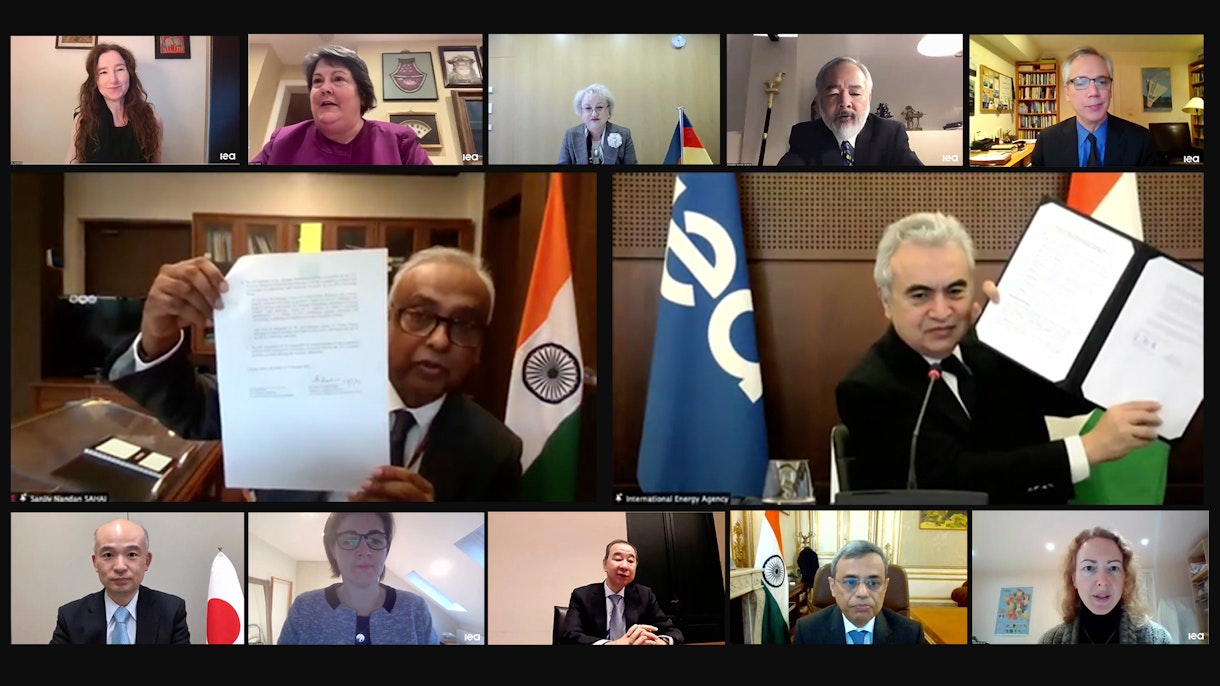 Less than four years after the International Energy Agency welcomed India as an Association country, IEA members and the Government of India today agreed to enter into a Strategic Partnership, strengthening their collaboration across a range of vital areas including energy security and clean energy transitions. The signing of the Framework marked a major milestone in global energy governance that could lead to eventual IEA membership for India.

The IEA and India signed the Strategic Partnership Framework during a virtual ceremony, with senior representatives from India and IEA Members in attendance. Participants included Ambassador Hiroshi Oe of Japan, the Chair of the IEA Governing Board, and Ambassador Jawed Ashraf of India. The Framework was signed by Mr Sanjiv Nandan Sahai, Secretary of the Ministry of Power, representing India, and Dr Fatih Birol, IEA Executive Director, on behalf of the Agency’s members.

“Today is a historic day. The signing of this agreement reaffirms and advances the invaluable relationship that IEA members and India have,” said Mr Sahai. “Under the framework of this newly formed alliance, we will establish with the IEA the key steps for enhancing energy security and substantive cooperation across the full spectrum of IEA activities. We hope this partnership leads to an extensive exchange of knowledge and can be a stepping stone towards India becoming a full member of the IEA."

“India will have a critical role in shaping the world’s energy and climate future. As the leading global authority on clean energy transitions, the IEA is the perfect partner to support India as it expands and improves its energy system for the benefit of its 1.4 billion citizens,” said Dr Birol. “I believe this Strategic Partnership is the natural next step for India and the IEA that could eventually lead to full membership. We’re delighted to be further strengthening our work with India to help it pursue a secure and sustainable path forward, and look forward to working closely with the Government of India to develop and coordinate the contents of the Strategic Partnership."

The Strategic Partnership Framework represents a new phase in the relationship between the IEA and India, the world’s third-largest energy consumer, making it the first IEA Association country to take a formal step to further advance ties with the Agency. A number of IEA members expressed their support for the big step forward.

“This signing ceremony marks a milestone of deepening the successful cooperation between India and the IEA,” said Mr Anders Ygeman, Sweden’s Minister for Energy and Digital Development. “Together we can achieve necessary changes for a green, sustainable and inclusive energy transition globally. Sweden greatly values this deepened cooperation and I look forward continuing working with my Indian colleagues.”

India joined the IEA Family as an Association country in 2017, an act marked by a ceremony in New Delhi with Mr Piyush Goyal, then Minister for Power, Coal, New and Renewable Energy and Mines; and Mr Dharmendra Pradhan, Minister for Petroleum and Natural Gas; and the IEA’s Dr Birol.

India is becoming increasingly influential in global energy trends. According to the IEA’s in-depth report on India’s energy policies, which was released in January 2020, the country’s demand for energy is set to grow rapidly in the coming decades, with electricity use set to increase particularly fast. The country's reliance on fuel imports makes further improving energy security a key priority for the Indian economy.

“With India’s increasing involvement, the IEA is able to more fully represent global energy users and producers,” said Mr Angus Taylor, Australia’s Minister for Energy and Emissions Reduction. “I applaud the commitment demonstrated by the Government of India in taking significant steps, not only to shore up their own domestic security but to also identify ways in which they can contribute to global energy security.”

Italy also offered its congratulations to the IEA and India. “In a time when we face global key challenges, such as energy transition and the fight against climate change, we sincerely appreciate the strengthening and enhancing of the cooperation with India, a key partner for the IEA and for all of us members of the Agency,” said Mr Luigi Di Maio, Italy’s Minister of Foreign Affairs and International Cooperation. “As the current holder of the G20 Presidency and as partner of the UK in the COP26, Italy is committed to a sustainable, resilient and clean energy future, and I am sure that the Strategic Partnership with India will be a valuable asset in our common endeavour.”

Today, the IEA and India cooperate on a wide-variety of topics, including the expansion of renewables, energy efficiency, the energy-environment nexus, oil stocks and emergency preparedness, data, investment and innovation. The IEA also regularly provides detailed analysis of India’s energy sector, such as a recent deep dive on decarbonising the iron and steel sector, and an upcoming World Energy Outlook special report on India.

“The agreement between the IEA and India to pursue a Strategic Partnership is a major step towards building a sustainable, secure and prosperous energy future globally. By joining forces even closer with India in addressing the energy and climate challenges of the future, we also tap into a great potential for innovation and sustainable growth for all partners involved,” said Mr Peter Altmaier, Germany’s Minister for Economic Affairs and Energy.

“As one of the world’s largest energy consumers with the outlook for unparalleled growth, India’s addition to the IEA family will further reinforce the solid stature and significant influence of the IEA, while extending the reach of many aspects of its work, including on energy security, electricity access and natural gas markets,” said Mr Seamus O’Regan, Canada’s Minister of Natural Resources. “It will also serve to strengthen the agency’s reach in the context of its Clean Energy Transitions Programme.”

Starting in 2015, the IEA has been opening its doors to major emerging economies that are at the centre of the global conversation on energy. Since then, eight countries have joined the IEA’s Association programme: Brazil, China, India, Indonesia, Morocco, Singapore, South Africa and Thailand. Along with the IEA’s 30 members and the three countries formally seeking accession, this expanded IEA Family now represents 75% of global energy demand, up from 40% in 2015.

The IEA was founded in 1974 by industrialised countries – within the framework of the Organisation for Economic Co-operation and Development (OECD) – in response to the oil embargo. As a result, countries seeking to become members of the IEA must also be members of the OECD and ensure they hold total oil stocks equivalent to at least 90 days of net oil imports. But over the years, the IEA’s mission has expanded substantially and today the agency is working with major economies around the world to enhance energy security and to help accelerate their clean energy transitions.