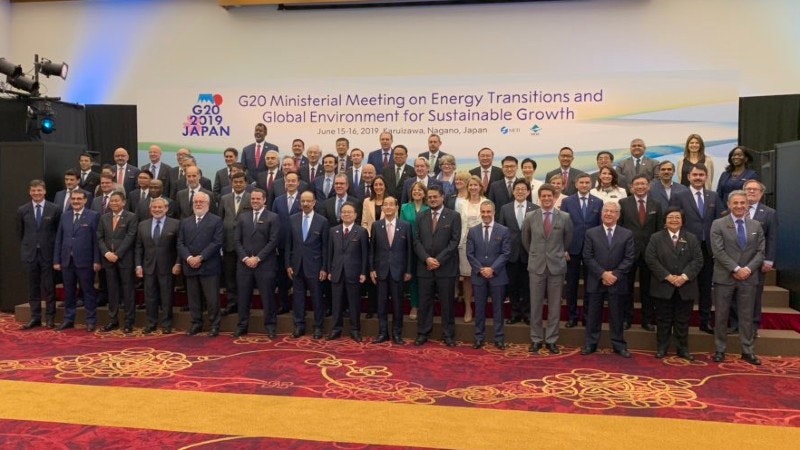 The IEA's contributions to the G20 this year include a major report on hydrogen as well as work on innovation gaps and investment in low-carbon power. (Photograph: IEA)

KARUIZAWA, Japan – The International Energy Agency has provided in-depth support for this weekend’s meeting of G20 energy and environment ministers, including the publication of a major new study on hydrogen’s potential role in global energy transitions.

Under Japan’s G20 presidency, the ministerial meeting took place in the town of Karuizawa.

The IEA report on hydrogen – The Future of Hydrogen: Seizing Today’s Opportunities – analyses hydrogen’s current state of play and offers recommendations for its future development and how it can help to tackle critical energy challenges. The IEA carried out the study at the request of Japan’s G20 presidency. It was launched Friday by Dr Fatih Birol, the IEA’s Executive Director, alongside Mr Hiroshige Seko, Japan’s Minister of Economy, Trade and Industry.

The IEA provided several other important contributions to the G20 this year at the presidency’s request, including an analysis identifying more than 100 innovation gaps across the energy system and recommendations for how to fill them; a report on securing investment in low-carbon power generation; and other activities and analyses to encourage greater international collaboration on data gathering.

The IEA’s G20 work also involves tracking progress towards phasing out inefficient fossil fuel subsidies that encourage wasteful consumption. This is done through an annual update in the World Energy Outlook, the IEA’s flagship publication, and a joint report with the Organisation for Economic Co-operation and Development.

At the ministerial meetings in Karuizawa, Dr Birol presented findings from the new reports and spoke about other important topics, including energy access in Africa, tracking progress towards clean energy goals and developments in the global trade in liquefied natural gas (LNG). (Slides from his two presentations are available here and here.)

On the sidelines, he held bilateral meetings with ministers from several countries, including Australia, Brazil, India, Indonesia, Japan, Saudi Arabia and Singapore.

The IEA also supported the official side events of the ministerial meetings: the G20 Natural Gas Day, the G20 Energy Efficiency Financing Summit and hydrogen investor events in Japan. The IEA’s contributions to this year’s G20 are the latest instance of the agency’s active support for a range of G20 meetings and work streams over the past 10 years.