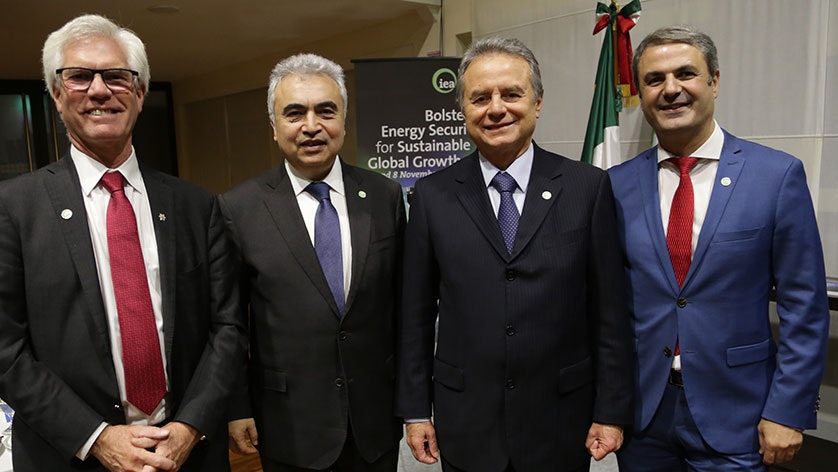 Ministers representing the International Energy Agency’s 29 member countries unanimously endorsed the rapid steps Mexico was taking to become the next member of the IEA, expanding membership to Latin America and providing a major boost for global energy governance.

Gathering at the IEA’s 2017 Ministerial Meeting in Paris, the IEA ministers recognized that Mexico had taken all necessary steps in record time to  meet international membership requirements since its initial expression of interest in November 2015. President Peña Nieto has submitted the IEA Agreement for ratification to the Mexican Senate.

“The IEA is delighted to welcome Mexico -- a large and important Latin American economy and global player -- as our next member,” said Dr Fatih Birol, the IEA’s executive director. “This represents a real symbol of the IEA’s transformation into a global energy agency, representing energy consumers as well producers.”

Mexico’s IEA membership will follow ambitious and determined work by the government of Mexico to reform its energy sector, moving away from state monopolies, attracting new investments and promoting the clean energy transition. Mexico will be a decisive partner in developing policy solutions for sustainable, clean and affordable energy, and meeting the IEA’s global energy security mandate.

“We are in the process of ratification of the Agreement on an International Energy Program by the Mexican Senate, considering that the IEA is the leading organization on energy research and policy development, Mexico will benefit from the best international practices, regulatory cooperation, data sharing, and coordinated responses during emergencies,” said Pedro Joaquín Coldwell, Mexico’s Secretary of Energy.

Mexico’s membership is an integral part of the IEA’s “open door” policy, which was initiated in 2015, to engage more deeply with emerging economies and the key energy players of Latin America, Asia and Africa. The IEA Family, with Mexico, 29 member states and seven Association countries, now accounts for more than 70% of global energy consumption, up from less than 40% in 2015.

Mexico is the world’s 12th-largest oil producer, and has some of the world’s best renewable energy resources. The Reforma Energética has moved Mexico into a leadership position across the entire energy spectrum. Its recent reforms were highlighted in the IEA’s first in-depth energy policy review, as well as in the Mexico Energy Outlook.

Mexico’s wide-ranging energy reform, which began in 2013, ended the longstanding dominance of state monopolies on oil and electricity, and opened up key parts of the energy sector to new players, investment and technology. It is expected to reverse the country’s declining oil production, increase the share of renewables in the power sector, and slow the growth in carbon emissions, providing a solid foundation for robust economic growth in the coming decades.

The country is also endowed with high hydrocarbons reserves as well as some of the world’s best renewable potential for solar and wind. It is a technology leader in geothermal and has been active in ten of the IEA’s Technology Collaboration Programmes (TCPs) for over a decade, including the International Smart Grid Action Network (ISGAN), Advanced Fuel Cells, Greenhouse Gas R&D and Enhanced Oil Recovery TCPs, as well as six renewable energy TCPs.

Mexico is also playing a leading role in the fight against climate change, with a commitment to sustainable energy development backed by clear energy efficiency and renewable energy targets, and followed through with strong implementation mechanisms. Mexico was the second country to enshrine its climate target into a climate law, requiring Mexico to cut its carbon dioxide emissions by 50 percent by 2050.

Mexico’s successful recent oil-bid rounds and its new electricity market design set new and innovative examples for smart and effective policy design, establishing best practices that can be replicated in other countries.

With technical support from the IEA Secretariat, Mexico is adapting its data-collection systems and oil stockholding regulation to the new reality of a competitive market with multiple private and public actors. The IEA’s in-depth review of Mexican energy policy, published earlier this year, found a high degree of convergence between the new energy policy and the IEA’s Shared Goals.