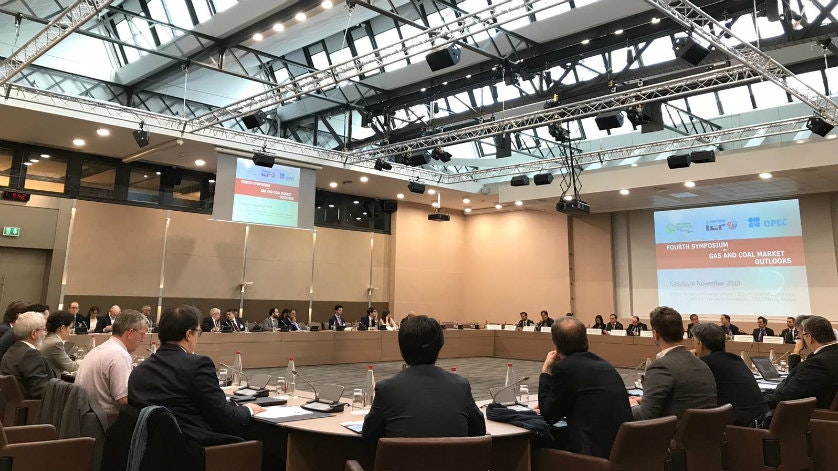 The Symposium has been held every two years since 2012, in response to a call from G20 leaders. (Photograph: IEA)

The meeting brought together more than 100 participants, including experts, government officials, business leaders and representatives from the gas and coal industries. It consisted of separate sessions covering natural gas markets, coal markets and the competition between the two fuels in the power sector where the landscape is changing rapidly due to the build-up growth of renewables.

Participants discussed the need for investment to replace declining production from existing assets and, in the case of natural gas, to meet growing needs. They also explored the prospects for liquified natural gas (LNG), where substantial new liquefaction capacity is coming into service. LNG supply is diversifying globally with major suppliers influencing each other and providing more liquidity in LNG trading. Those extra supplies of flexible LNG have been absorbed by growing Asian demand, mainly from China, driven by a requirement for less polluting fuels for residential and industry sectors.

The longer-term discussions focused on how the implementation of measures to meet the climate change mitigation targets under the Paris Agreement would affect demand for coal and for natural gas.  Coal consumption in many developed economies is expected to decline as more countries seek to limit the use of coal for power generation. Carbon capture utilisation and storage is one of the critical solutions needed to decarbonise energy systems, but is lagging behind other low-carbon energy technologies.

The Symposium, which has been held every two years since 2012, in response to a call from the G20 leaders’ Summit (Cannes, 2011) for continued annual dialogue between producers and consumers on short-, medium- and long-term outlooks and forecasts for oil, gas and coal.