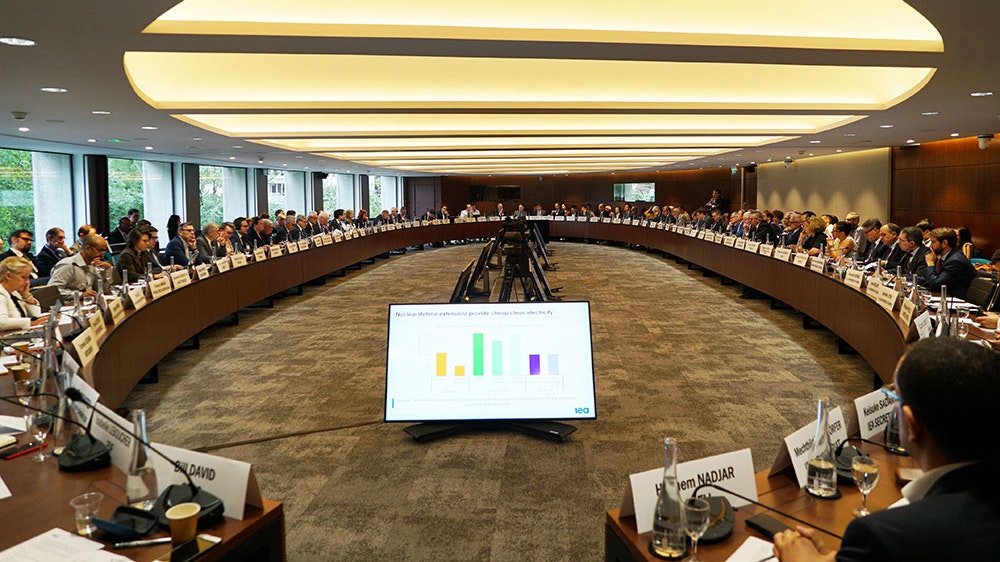 The discussion at the event was informed by two recent major reports from the IEA about nuclear power and hydrogen. (Photograph: IEA)

The International Energy Agency on 11 July hosted a discussion among leading global energy sector figures about technologies that can help to bring about a clean energy future, including hydrogen and nuclear power.

The main speakers at the event were Dan Brouillette, Deputy US Energy Secretary; Jean-Bernard Lévy, Chairman and CEO of EDF; Hiroshi Oe, Japanese Ambassador to the OECD and Chair of the IEA Governing Board; and Dominique Ristori, Director-General Energy at the European Commission.

The discussion at the IEA’s headquarters in Paris was informed by two recent major reports from the IEA: Nuclear Power in a Clean Energy System and The Future of Hydrogen: Seizing Today’s Opportunities.

At a time of profound change in the global energy sector, countries will require all the tools at their disposal to meet their commitments to tackling emissions and air pollution while maintaining energy security.

“I’d like to thank our speakers for the robust and rewarding conversation,” said Dr Fatih Birol, the IEA’s Executive Director, who hosted the event. “There is no miracle technology that will solve the daunting environmental challenges the world faces. We need continued innovation across a range of technologies, including renewables, energy efficiency, batteries, carbon capture and more. The IEA sees hydrogen and nuclear power as important parts of clean energy transitions in many countries, but they need help from governments to overcome significant obstacles.”

Nuclear power is by far the largest source of low-carbon electricity in both Europe and North America, but many of their plants are aging. Without effective policies to spur new investment, advanced economies could lose as much as two-thirds of their nuclear capacity in the next 20 years, threatening global climate goals and energy security.

Hydrogen, which is currently enjoying unprecedented momentum, can help tackle various critical energy challenges. It offers ways to decarbonise a range of sectors where it is proving difficult to meaningfully reduce emissions, including long-haul transport, chemicals, and iron and steel. Hydrogen’s ability to store and transport energy could enable renewables to make a greater contribution to the global energy system. But it has experienced false starts in the past and still faces big challenges to scale up infrastructure and bring down costs.

The meeting on 11 July to discuss these important energy issues highlights the IEA’s role as the world’s leading energy authority and its commitment to covering all fuels and all technologies. Guests included Lithunia’s Minister of Energy Å½ygimantas VaiÄiÅ«nas. Lithuania has requested to join the IEA as a member country and the accession process has begun.