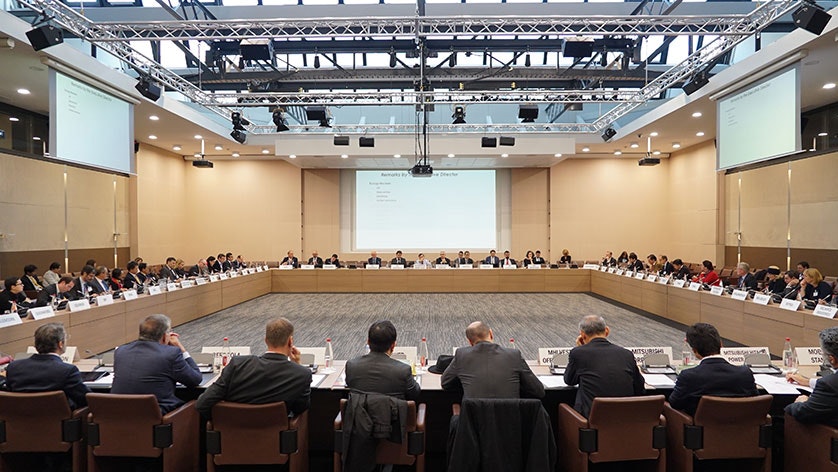 The International Energy Agency on Wednesday held a meeting of the IEA Energy Business Council, which brings together representatives of the world’s largest energy companies, to discuss the state of the global energy system.

The aim of the EBC is to promote dialogue among the IEA, the business community and policymakers on a broad range of cross-cutting issues that have implications for the global energy system, and it is the overarching body through which the IEA interacts with the energy business community.

Executives from more than 50 companies representing power and utilities, renewables, oil and gas, manufacturers and energy-intensive industries attended the meeting. Delegates came from around the world, including Australia, Brazil, the European Union, Japan, Korea, India, Iraq, Thailand, and the United States.

The meeting was Co-Chaired by Mr Noé van Hulst, the Chair of IEA Governing Board, and Dr Fatih Birol, the IEA Executive Director.

This was followed by presentation and extensive discussion around findings of recently released IEA flagship publications, the World Energy Outlook and the WEO Special Outlook on Producer Economies.

Participants at the meeting also discussed the IEA’s plans to analyse prospects for hydrogen and how it can support clean energy transitions, diversify the fuel mix, and help address energy security concerns. The meeting heard that while hydrogen deployment has technological and economic challenges, global momentum behind the technology is growing.

The IEA will release a major report next year on the state of play of hydrogen, its economics, and future potential, as input to Japan’s Presidency of the 2019 G-20 Summit.

“This is the time to have an even closer dialogue between industry, the IEA and governments,” said Dr Birol. “Our analysis shows that more than 70% of total investment in energy supply will be government driven, but it will be up to private companies to implement the vast bulk of investment. We need the contribution of all key actors to steer the energy system towards a more sustainable path.”

“The private sector has a critical role to play in reducing global CO2 emissions,” added Mr van Hulst, “this means investing not just in renewables and energy efficiency, but also CCUS, nuclear, and hydrogen. There is a growing momentum in industry to develop partnerships with governments to scale up the development and deployment of CO2 free hydrogen."