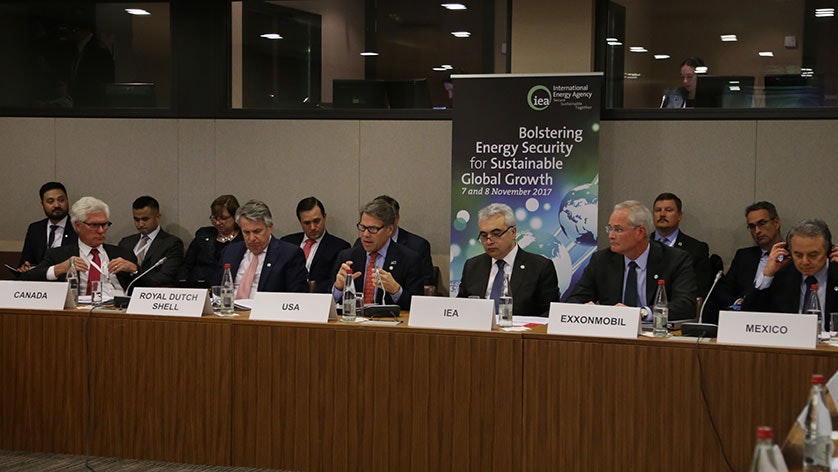 “Today’s summit at the IEA provided a unique opportunity to gather with my counterparts and industry leaders to discuss the future of CCUS," said Secretary Perry. "While we come from different corners of the world, we can all agree that innovation, research, and development for CCUS technologies can help us achieve our common economic and environmental goals.”

“This is the highest level of industry and government engagement that we have seen on CCUS,” Dr Birol said. “Global energy leaders recognise that urgent action is needed to support this essential technology and are demonstrating their preparedness to work together to achieve this.”

CCUS offers an important and unique technology solution to deliver the deep emissions reductions needed in industry and the power sector, while also supporting energy security and protecting substantial capital investments in existing infrastructure. But investment is lagging even as the global energy transformation gains momentum.

The policies and programmes that have been successful in supporting a wide range of low carbon energy investments will increasingly need to be tailored and applied to CCUS if energy and climate goals are to be achieved.

“The under-investment in CCS is deeply concerning,” said Dr Birol. “We know that we face an unprecedented challenge in meeting climate goals. Without CCS, this challenge will be infinitely greater. We also know that this is essentially a policy question.”

Ten of the 17 large-scale CCUS plants currently in operation have been commissioned in the last five years and include key applications in coal-fired power generation, oil sands processing and steel production. While the United States was a pioneer in CCUS and has continued its leadership, including with the recent commissioning of the Petra Nova and Illinois Industrial CCS projects, the project fleet is now much more diverse and a truly global effort is underway.

CCUS projects are today operating or under construction in Australia, Brazil, Canada, the People’s Republic of China, Norway, Saudi Arabia and the United Arab Emirates. Smaller-scale projects are underway throughout Europe and in Indonesia, Japan, Korea and Mexico.

The IEA offered five priority areas of action to boost CCS investment -- “Five Keys to Unlock CCS Investment.” These are:

The IEA will maintain a strong focus on CCUS in the Agency’s clean energy technology work and analysis. Summit participants recognised the continued leadership of the IEA and its role in bringing together industries, governments and researchers to support the expanding global CCUS effort.

Download the Chair's Summary and 5 Keys to Unlock CCS Investment.