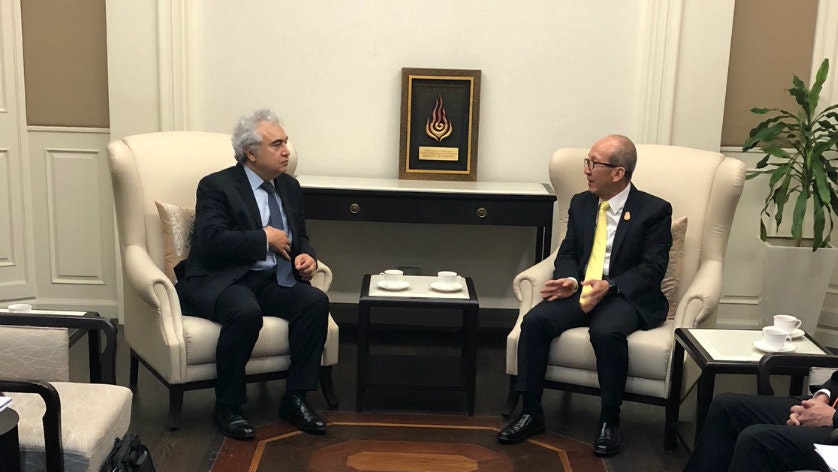 BANGKOK – Dr Fatih Birol, the Executive Director of the International Energy Agency, visited Bangkok today for high-level talks with senior energy stakeholders in Thailand and discuss the IEA’s extensive work in the country as well as next steps for collaboration ahead of Thailand's ASEAN presidency in 2019.

During the visit, Dr Birol met with HE Dr Siri Jirapongphan, Thailand’s Minister of Energy, to discuss the IEA’s collaboration with Thailand and establish next steps and new opportunities for substantive work together. Dr Birol reaffirmed the IEA’s strong commitment to Thailand as a major player in ASEAN and a key member of the IEA Family.

Minister Jirapongphan said he would greatly appreciate assistance from the IEA on power market reform, renewables costs and regulatory frameworks for deployment of decentralised solar PV. Dr Birol and Minister Jirapongphan agreed to pursue projects under Thailand’s ASEAN Presidency on opportunities for greater power system integration, renewables integration and big data at the ASEAN level, as well as regional energy efficiency standards for air conditioners, which would be agreed upon at the ASEAN Minister of Energy Meeting in Singapore in October.

Thailand joined the IEA as an Association member in 2015. The other Association countries are Brazil, China, India, Indonesia, Morocco, and Singapore. The IEA Family, which includes member and association countries, now accounts for more than 70% of global energy demand, compared with about 40% in 2015, when the IEA began opening its doors to emerging countries.

Dr Birol also attended a breakfast at the Residence of Australia’s Ambassador to Thailand, where he was joined by several other Ambassadors from countries of the IEA family. They welcomed the Agency's engagement and work in Thailand under the IEA’s open doors policy, and sought Dr Birol’s views on key energy issues in Thailand, Southeast Asia, and globally.

Following the breakfast, Dr. Birol delivered an executive address to an audience of about 200 people including senior policymakers and industry leaders hosted by the Ministry of Energy. The remarks presented the IEA’s leading analysis on key energy trends and developments. This was followed by lunch with senior executives from the Ministry, which focused on Thailand’s energy policy priorities and key challenges, especially around upstream gas, renewables penetration, energy efficiency, power sector development, and priorities for Thailand’s ASEAN Presidency.