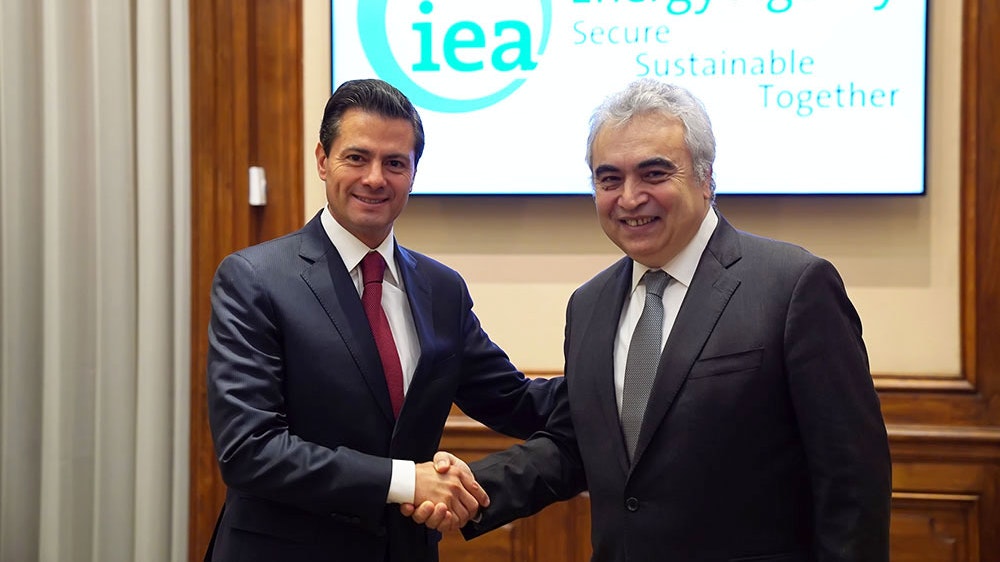 Dr Fatih Birol, the executive director of the International Energy Agency, met with the President of Mexico, Mr Enrique Peña Nieto, days after the ratification of the IEA agreement in the Mexican Senate.

President Peña Nieto highlighted that IEA membership constituted an integral part of the energy reform he has been promoting since taking office in December 2012. President Peña Nieto stressed that the rigorous accession process of Mexico to the IEA was an important seal of approval for Mexico's new energy policy, measured against the highest international standards. And he underlined that IEA membership amounted to an important commitment for continued improvements to Mexico’s energy policy.

Dr Birol congratulated President Peña Nieto on Mexico’s accession and highlighted Mexico's newfound role at the forefront of global energy policy discussions. He said that the recent successful bid-round demonstrated investors’ confidence in the policy reforms. Dr Birol also pointed out that according to the IEA, the benefits of the energy reform to the Mexican economy are set to amount to 1 trillion USD (Mexico Energy Outlook).

Mexico as the IEA’s first Latin American member country will be a decisive partner in developing policy solutions for sustainable, clean and affordable energy, and meeting the IEA’s global energy security mandate.

Mexico’s IEA membership is also an integral part of the IEA’s recent “open-doors” policy, which was initiated in 2015, to engage more deeply with emerging economies and the key energy players of Latin America, Asia and Africa. The IEA Family, including member states and seven Association countries, now accounts for more than 70% of global energy consumption, up from less than 40% in 2015.

Mexico, a country of 120 million people and the world’s 15th largest economy, is a major oil producer, and has some of the world’s best renewable energy resources.