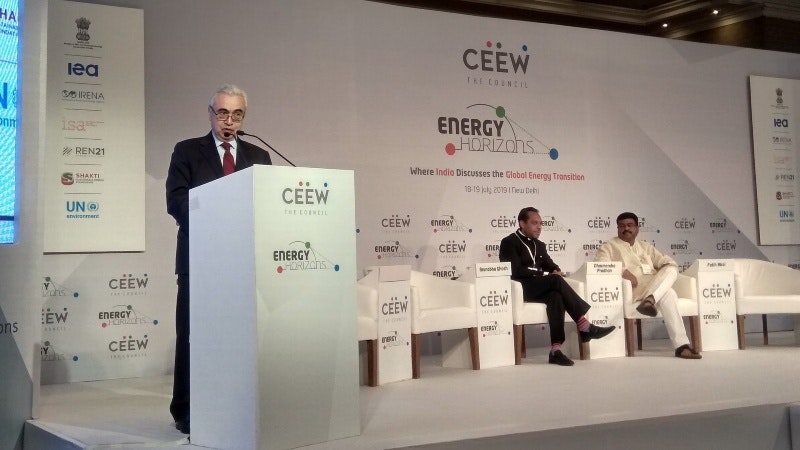 Dr Birol delivered a keynote address on the theme of energy transitions at the Energy Horizons conference in New Delhi, the flagship event of the Council for Energy, Water and Environment (CEEW). (Photograph: CEEW)

NEW DELHI – The International Energy Agency’s Executive Director, Dr Fatih Birol, was in India on a two-day visit last week during which he met with ministers to discuss the energy priorities of the recently elected government, and delivered a keynote speech at a major energy conference.

While in New Delhi, Dr Birol signed a memorandum of understanding with Dr Ajay Mathur, Director General of The Energy & Resources Institute (TERI), a top Indian policy research organisation. The MoU is intended to strengthen cooperation between the two organisations in their work on a wide range of issues such as affordable energy access and the integration of renewable energy, energy efficiency, mobility and reducing emissions in the industrial sector.

“The IEA has a very strong and positive relationship with India, which we hope to strengthen in the future,” Dr Birol said. “We work with India on many different fronts, including the government’s important efforts to improve energy access across the country, and are supporting the country in its energy transition, which is one of the most significant for the global energy system.”

The IEA and India have a longstanding bilateral relationship built on cooperation in a broad range of areas including energy security, statistics, efficiency and technology. India joined the IEA as an Association country in March 2017. This year, it became the first Association country to participate in an IEA Governing Board meeting.