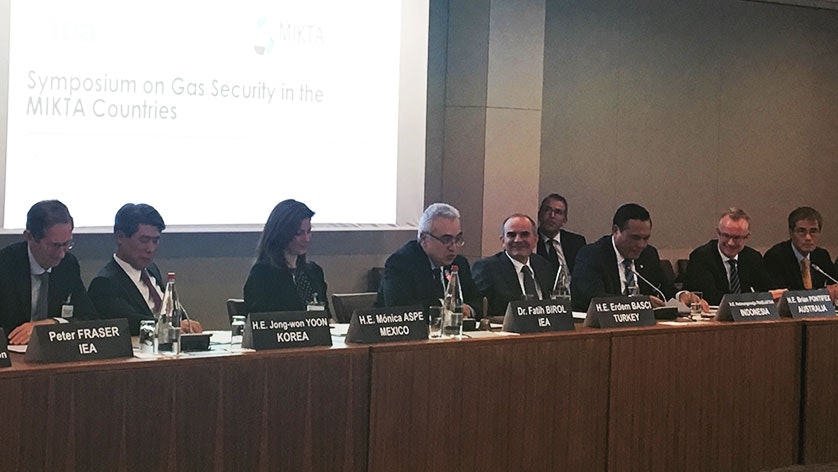 Despite vast difference in geography and economies, the five MIKTA countries share an interest in the future of natural gas (Photo: IEA)

Representatives from MIKTA nations – Mexico, Indonesia, Korea, Turkey and Australia – met in Paris today to discuss the future of  natural gas and review gas-security issues in their countries at a gathering supported by the International Energy Agency.

Ambassadors from the five MIKTA nations as well as officials from the United States, Poland and the Slovak Republic took part in the Symposium on Natural Gas, which was opened by Turkish Ambassador H.E. Erdem BaÅŸçÄ±, the current Chair of MIKTA.

Dr Fatih Birol, the IEA Executive Director, opened the first session with a presentation on the need for increasing transparency and liquidity of the gas market.

“MIKTA is emblematic of the one of one of pillars of the modernization of the IEA – our open doors policy,” said Dr Birol. “It includes members of long standing Turkey and Australia, Korea, who I remember joining the IEA in 2002, Indonesia who joined as one of the first Association countries at our last Ministerial meeting two years ago, and Mexico who we will be welcoming as our 30th IEA Member Country at the Ministerial meeting in early November of this year.”

Despite vast difference in geography and economies, the MIKTA countries share an interest in the future of natural gas. Mexico has recently reformed its upstream sector to encourage development of domestic resources, Indonesia is one of the pioneers of LNG industry and a long time exporter, Korea is the second largest LNG importer globally, Australia is one of the largest LNG exporters in the world, and Turkey is expanding its role as a physical hub on natural gas supply routes to southeast Europe.