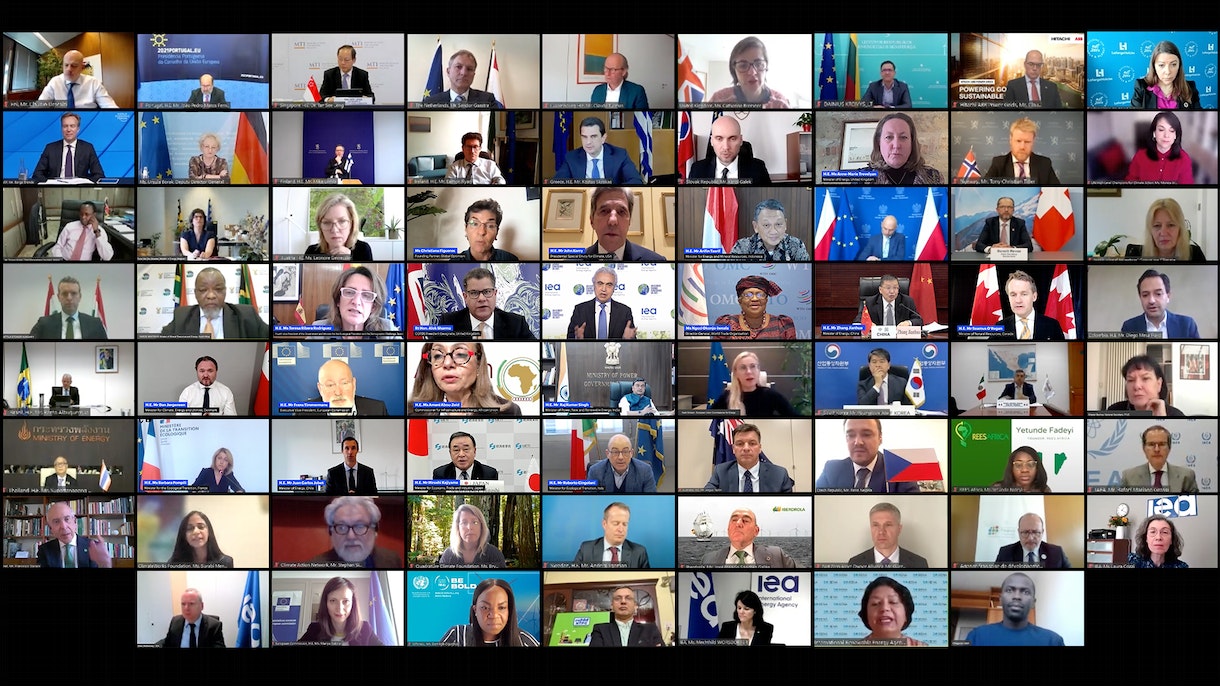 Top international energy and climate leaders from more than 40 countries took part in the IEA-COP26 Net Zero Summit today to identify how to work together to reduce global greenhouse gas emissions and meet the goals of the Paris Agreement.

The Summit is a critical milestone on the road to COP26 in Glasgow in November. It brought together representatives of countries covering more than 80% of global GDP, population and emissions. Key participants included Zhang Jianhua, China’s Minister of Energy; Frans Timmermans, Executive Vice-President of the European Commission; Raj Kumar Singh, India’s Minister of Power, New and Renewable Energy; and John Kerry, US Presidential Special Envoy for Climate; Amani Abou-Zeid, African Union Commissioner for Infrastructure and Energy; and Ngozi Okonjo-Iweala, Director-General of the World Trade Organisation.

“It is time for the world to move from a decade of climate change deliberation to a decade of delivery. The UK strongly encourages countries to endorse the IEA’s seven principles for achieving net zero. Today's Summit clearly showed willingness from governments, civil society and businesses to work together in each emitting sector to make this happen and keep the 1.5 degree target within reach,” said Alok Sharma, the COP26 President. "This should not be viewed as a shouldering of a burden, but more a sharing of an opportunity. By working together, we can accelerate progress, create jobs and prosperity, and protect our planet for future generations.”

“Our Net Zero Summit made clear that the vast majority of the world agrees on the gravity of the climate crisis and the urgency of immediate actions to put global emissions on track towards net zero. But it also underscored the need for greater international collaboration to drive the rapid global deployment of clean technologies across all the key sectors of the economy,” said Fatih Birol, the IEA Executive Director. “No country can do this alone. If we want the transition to clean energy to happen quickly, the world’s major economies have to work much more effectively and closely together. The Summit’s Key Principles show what needs to happen, and I offer the IEA’s full support for the UK COP26 Presidency’s efforts to strengthen the international cooperation mechanisms that will accelerate our transition to net zero.”

Many IEA member governments supported the Seven Key Principles presented by the IEA at the Summit to guide the implementation of net zero commitments. The principles cover essential areas such as the need for sustainable recoveries from the Covid-19 crisis, the critical importance of implementable emissions reduction roadmaps for the current decade, and the development of stronger mechanisms for international coordination to accelerate innovation and deployment in each major emitting sector of the global economy. The principles also address issues such as technology collaboration, best-practice sharing, investment tracking, ensuring people-centred transitions, and integrating energy security and affordability into net zero plans.

To support stronger government actions, the IEA on 18 May will publish the first comprehensive roadmap for the global energy sector to reach net-zero emissions by 2050. Requested by the COP26 Presidency as a key input, the roadmap will set out a pathway for what is needed from governments, companies, investors and citizens to put global emissions on a path in line with a temperature rise of 1.5 degrees. The roadmap will help decision makers to prioritise urgent action in the lead-up to Glasgow.

Also taking place today was the Climate and Development Ministerial, hosted by COP26 President Sharma and UK Foreign Secretary Dominic Raab, which focussed on countries that are most vulnerable to the impacts of climate change and helping them set the international agenda in the run-up to COP26 in November. The global gathering brought together countries and partners to build consensus and practical solutions on key issues such as responding to climate impacts, fiscal space and debt, and climate finance.

Five concurrent Summit Panels were also livestreamed across IEA digital platforms. Archived videos of all panels are listed below: