The number of electric cars on the road is expected to reach almost 10 million this year, as sales grow this year despite the Covid-19 pandemic, according to a new report by International Energy Agency.

The Covid-19 pandemic will affect global vehicle markets, and how governments respond to the pandemic will influence the pace of the transition to electric vehicles.

Global electric car sales grew by at least 30 percent every year over the past decade except for 2019, when growth slowed down to 6% as the regulatory environment changed in China and passenger car sales contracted in major markets. Even so, electric cars had another banner year in 2019, securing their highest ever share – 2.6% – of the global car market.

Last year, electric vehicles performed differently in markets worldwide. China remained by far the largest electric car market in the world, accounting for half sold in 2019. More than 1 million electric cars were sold in China in 2019, a 2% decrease from the previous year. Europe was the second largest market, with 561,000 cars sold in 2019. The United States followed with 327,000 cars sold.

Electric cars are expected to account for nearly 1% of the global car stock with this year’s sales. However, the report explains that second waves of the pandemic and slower-than-expected economic recovery could lead to different outcomes. Ultimately, government responses to the pandemic and how consumers emerge from the crisis will determine what happens to electric car markets in 2020 and beyond.

Electric vehicles play a critical role in meeting the environmental goals of the IEA’s Sustainable Development Scenario to reduce local air pollution and to address climate change. In 2019, all electric vehicles combined avoided the consumption of almost 0.6 million barrels of oil products per day globally. Also, electricity generation to supply the global electric vehicle fleet emitted about half the amount that would have been emitted from an equivalent fleet of internal combustion engine vehicles.

In the Sustainable Development Scenario, the global electric vehicle stock (excluding two/three-wheelers) grows by 36% annually, reaching 245 million vehicles in 2030 – more than 30 times above today’s level. In 2030, electric vehicles reduce GHG emissions by almost half compared to an equivalent fleet of internal combustion engine vehicles in the Stated Policies Scenario and by two-thirds in the Sustainable Development Scenario.

Global EV Outlook, the flagship publication of the Electric Vehicles Initiative (EVI), combines historical analysis with projections to 2030, providing key insights on electric vehicle and charging infrastructure deployment, ownership cost, energy use, carbon dioxide emissions and battery material demand. This year’s edition analyses the development of the global EV market and the impact of Covid-19, recent policy developments from around the world, EV projections for 2030, the technology and environmental performance of batteries and potential roles of EVs in power systems.

The Global EV Outlook is an annual publication that identifies and discusses recent developments in electric mobility across the globe. It is developed with the support of the members of the Electric Vehicles Initiative (EVI). Combining historical analysis with projections to 2030, the report examines key areas of interest such as electric vehicle and charging infrastructure deployment, ownership cost, energy use, carbon dioxide emissions and battery material demand 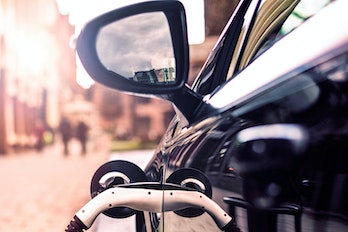