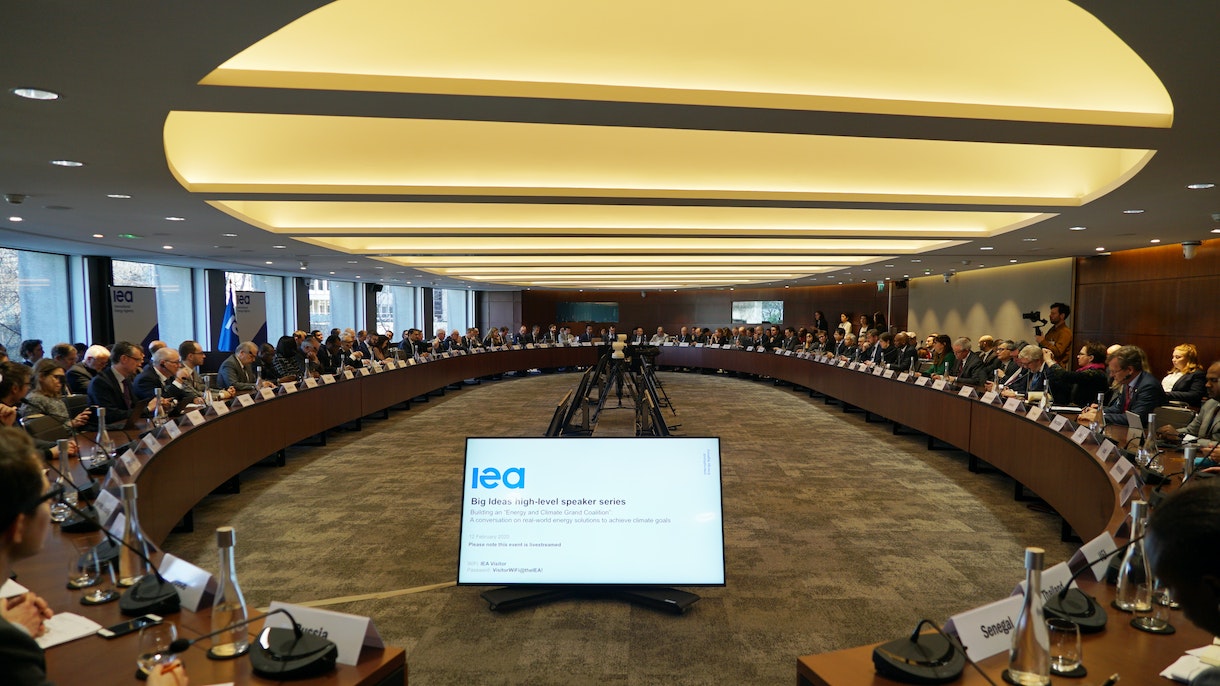 Ministers and high-level representatives from COP host countries met at the International Energy Agency on Wednesday to review ways the energy sector can meet climate and other sustainability goals.

The speakers included Kwasi Kwarteng, the Minister for Business, Energy and Clean Growth of the United Kingdom, which holds the Presidency of the upcoming COP26 this year; Michał Kurtyka, Poland's Minister of Climate and President of COP24; and Joan Groizard Payeras, Director-General of the Energy Agency at the Ministry for the Ecological Transition of Spain, which hosted the COP25.

The conference took place a day after the IEA announced that global carbon emissions had stopped growing last year, defying common expectations that they would increase in 2019. The news provided a positive backdrop for the discussions, which were chaired by Dr Fatih Birol, the IEA's Executive Director.

As part of its mandate as the leading global energy organization, the IEA is focusing on both energy security and global clean energy transitions, helping governments steer the energy sector towards international climate targets in a secure, sustainable and affordable manner. In his opening remarks, Dr Birol pointed out that the energy sector accounts for most of the global carbon emissions, and has a key role to play in global energy transitions.

“Without solving the challenge of the energy sector, we have no chance of solving our climate challenge,” Dr Birol said in his opening remarks. “We want 2019 to be remembered as the year of peaking global emissions and the 2020s as the decade of the decline in emissions. And the energy sector is ready to be part of the solution.”

As part of its commitment to bridging the gap between the energy sector and the climate goals, the Agency announced it would hold the IEA Clean Energy Transitions Summit on 9 July in Paris. This ministerial-level event will bring together key government ministers, CEOs, investors and other major stakeholders from around the world with the aim of accelerating the pace of change through ambitious and real world solutions.

The immediate aim will be to focus on concrete actions to reverse the growth in carbon emissions this decade, focusing on all the fuels and existing technologies that can help achieve that goal rapidly.

To support these objectives, the IEA will publish two major studies ahead of the summit. The first will be a World Energy Outlook Special Report that will map out how to cut global energy-related carbon emissions by one-third by 2030. The second will be the newest Energy Technology Perspectives report, which will focus on an energy sector pathway for reaching net-zero emissions, looking in detail into all technology opportunities that could help to reduce emissions in hard to abate sectors.

The IEA Clean Energy Transitions Summit will be preceded by the fifth edition of the Agency's annual energy efficiency ministerial conference, which will also take place in Paris on 8 July, and will be an opportunity to review the findings of the IEA’s Global Commission for Urgent Action on Energy Efficiency.

“The debate around climate change is sometimes too heated and there is too much tension between the energy community and the climate change community,” said Dr Birol. “We think this debate needs to be taken in a cool-headed manner. This calls for a grand coalition that brings together all the stakeholders that have a genuine commitment to reducing emissions – governments, industry, financial institutions, international organizations and civil society. Without this grand coalition, it will be very difficult to address this challenge.”