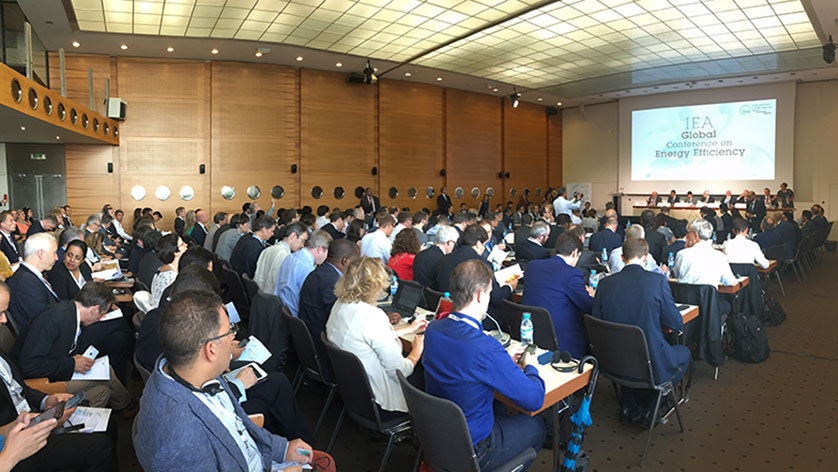 The IEA energy-efficiency conference heard from public and private-sector officials and focused on delivering the value of energy efficiency policies (Photo: IEA)

The International Energy Agency held its 2nd Global Conference on Energy Efficiency in Paris today, bringing together top-level government officials and energy-industry executives at a forum for global engagement and exchange on energy efficiency.

The conference was opened by the President of the United Nations General Assembly, Peter Thomson, and was attended by energy ministers from Argentina, Ireland, Morocco, and the United Arab Emirates, who shared lessons and progress on energy efficiency in their countries. Top business executives and senior government officials from around the world, including all G20 countries, discussed how countries can implement policies and programmes that will deliver real benefits.

“We are encouraged by the top-level interest in efficiency, which reflects the fact that many decision-makers in government and industry are putting efficiency at the centre of their energy and environmental policies,” Dr Fatih Birol, the IEA’s Executive Director, said in his opening remarks. “Our analysis has shown that only 30% of energy use is subject to efficiency standards. This means there is huge room for improvement.”

Energy efficiency is an increasingly important cornerstone of energy policy for governments and industry around the world making significant impacts on global energy trends. This is why the IEA is building a global hub for energy efficiency as part of its modernization agenda to promote efficiency policies and help speed up deployment. It is also hosting training weeks: this year, it will train 500 policy makers from 70 countries in Paris, Singapore, Georgia and Rio de Janeiro.

At the conference, Dr Birol also announced the IEA was building a new tool to map and measure global efficiency policies. The Global Exchange Hub for Energy Efficiency will serve as a unique resource for policy makers to learn what sector-specific policies are being applied around the world, what impact they are having, and what lessons have been learned from about design and implementation.

Mr Thomson, the President of the UN General Assembly, acknowledged the leadership and commitment of the IEA to energy efficiency policies, which are vital to reaching long-term energy and environmental goals. “The IEA is core to the implementation of practical measures to achieve universal energy security, thereby doing your part in the advancement of the Sustainable Development Goals and the ambitious targets set in the Paris Agreement on Climate Change,” he said in his remarks.

In his address, Argentina’s Minister of Energy and Mines, H.E. Juan José Aranguren, said his country was giving priority to energy efficiency. He added that he was also looking forward to working with the IEA on all energy-related issues during Argentina’s G20 presidency in 2018.

The Minister of Energy of the United Arab Emirates, H.E. Suhail Al Mazrouei, said that his country’s ambitious energy goals would be impossible to reach without energy efficiency policies. He noted that governments should work with companies to improve standards, and said industry was moving faster towards efficiency than most countries. “There is an economic rational to do so,” he said, adding he would work with the IEA to further these goals.

H.E. Aziz Rabbah, the Minister of Energy, Mines and Sustainable Development of Morocco, said energy efficiency was one of the levers that countries need to reduce their energy bills and diversify fuel supplies. It is promoting energy efficiency to reduce its dependence on fossil fuels, and help meet long-term goals of increasing the share of renewable power to 50%. Morocco looks forward to deepen its collaboration with the IEA as an Association member, he said.

In his remarks, H.E. Denis Naughten, TD, Ireland’s minister for communications, climate action and environment said energy efficiency makes a real difference to real people and should be seen as an enabler of economic activity.  He thanked the IEA for showing “excellent and far-sighted leadership in placing energy efficiency at the top of the IEA agenda.”