Energy data are generally collected independently across different commodities, such as oil, natural gas or coal. As such, commodity balances provide the simplest way to present the data for one fuel together, expressed in physical units. This could be joules or cubic meters for natural gas or tonnes for coal, for example. This is the method used in the IEA’s fuel information books on oil, coal, natural gas, renewables and electricity, and also in the comprehensive World Energy Statistics – which combines information for all fuels together.

However, as energy products are ultimately used for their energy content, and can also be converted into one another through a number of transformation processes, there’s a need to combine commodity balances to get a view of the energy system. This requires the development of an energy balance.

An energy balance helps us understand how products are transformed into one another, highlight the various relationships among these products, and show how all energy types are ultimately used.

The energy balance presents all the data in a common energy unit. This allows users to see the total amount of energy used and the relative contribution of each different source, for the whole economy and for each individual consumption sector. In addition, it allows users to compute the various energy transformation efficiencies; to develop several aggregated indicators (for example consumption per capita or per unit of GDP); and to estimate CO2 emissions from fuel combustion. An energy balance also allows the visualisation of the energy system via Sankey charts, such as the interactive Sankey chart available on the IEA website. 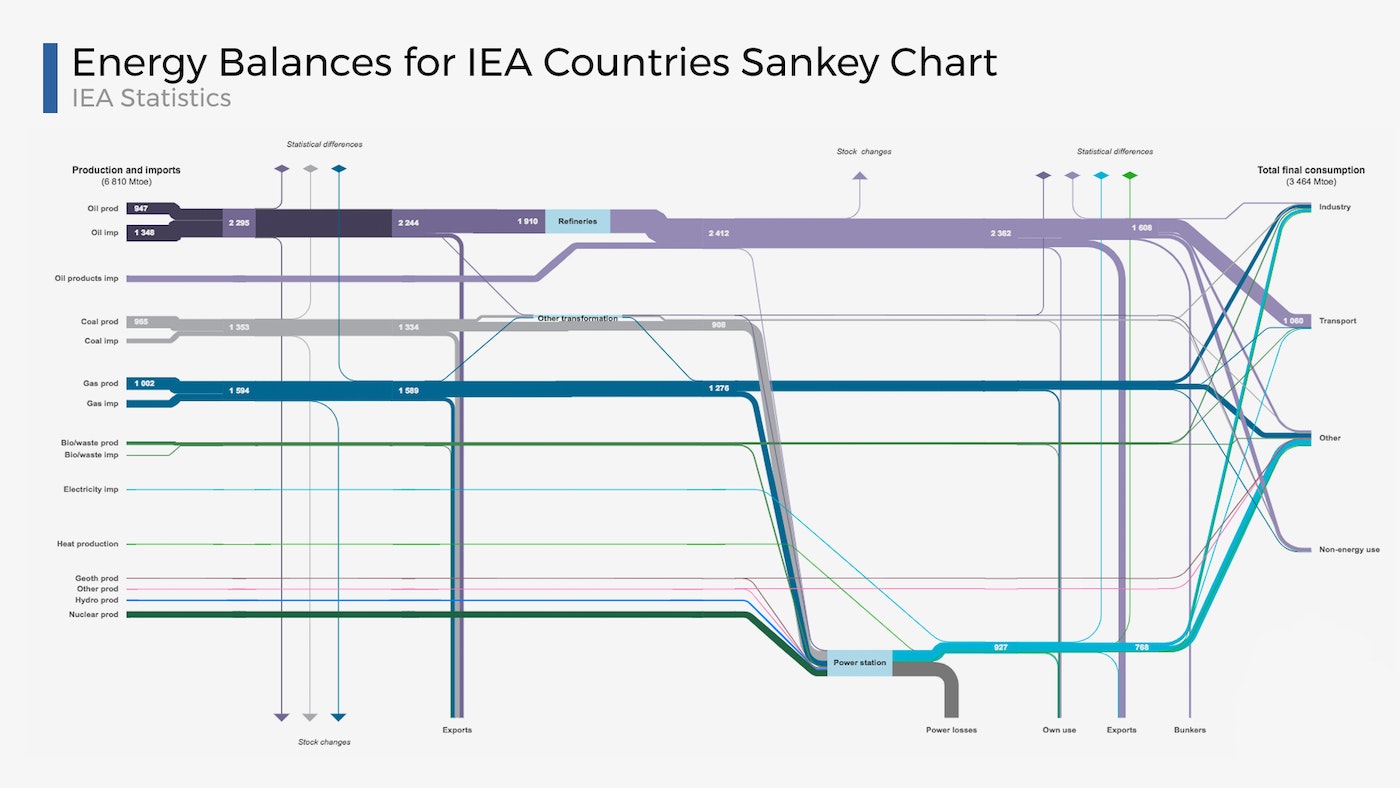 It is important to recognise that an energy balance is an accounting framework – as such it needs to be looked at as a whole. Taking data from any specific line or column without reference to the framework requires careful understanding.

Key data in the balances include Total Primary Energy Supply (TPES), Total Final Consumption (TFC), and the data on electricity generation by fuel type. TPES shows the overall energy supply available for use in a country, while TFC shows the energy that is actually used by final consumers – the energy used in homes, transportation and businesses. The electricity output data show the relative weights of all forms of energy in the generation mix. Therefore, in TFC the “electricity” product includes electricity generated from all the various energy sources, while in TPES only the corresponding primary equivalent amounts are included for each generation source.

Key information in the energy balance 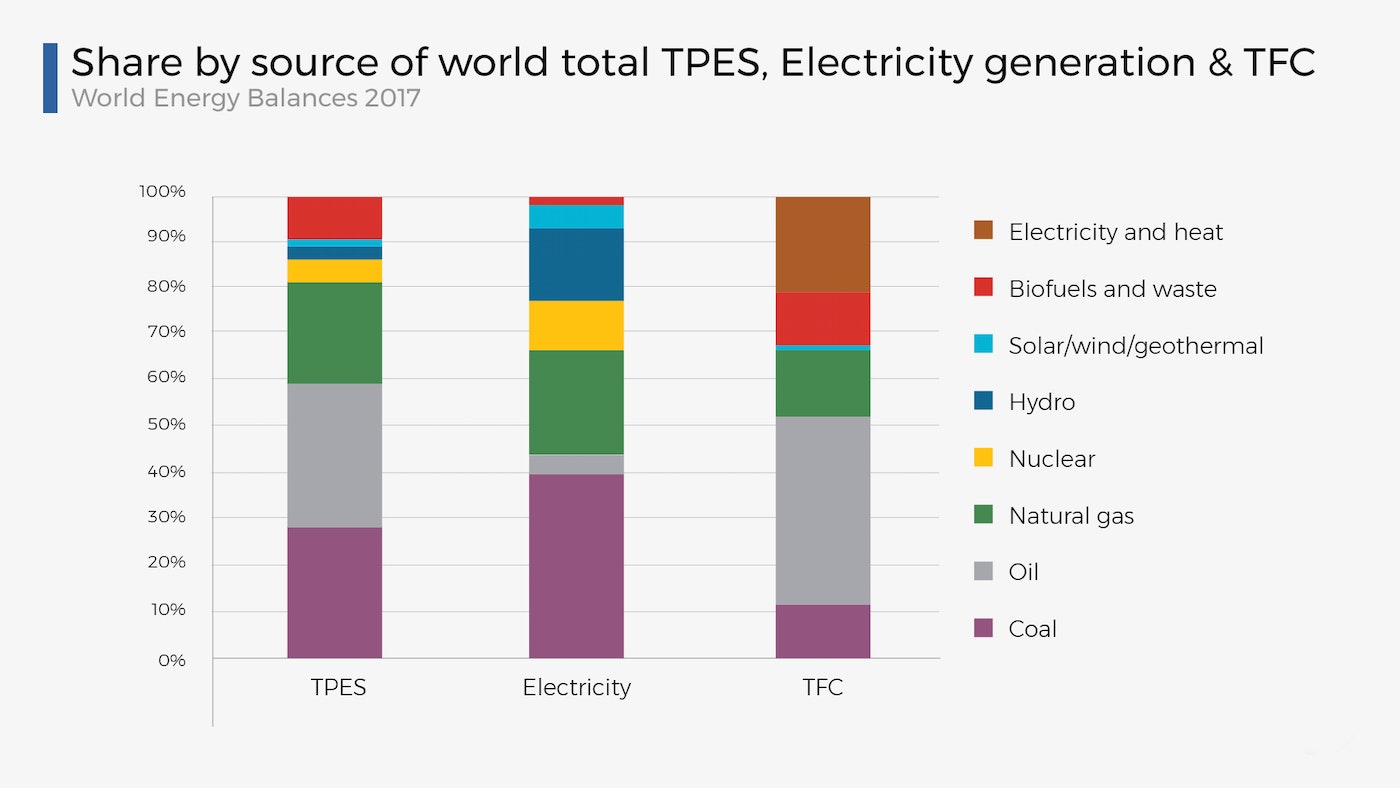 The energy balance is derived from data which can be measured by national authorities. As such the energy balance is also an essential tool used to check data accuracy, as large statistical differences in energy units, apparent energy gains or large losses in transformation processes, or large unexplained variations in shares or in high-level indicators may all indicate underlying data problems.

The methodology used by the IEA is consistent with the International Recommendations for Energy Statistics (IRES) which were adopted by the UN Statistics Commission in 2011 and were based on various consultation processes - the last being the multi-year InterEnerStat consultation, involving at least twenty organisations dealing with energy statistics. Besides references to harmonised definitions for products and sectors, this methodology contains coherent principles to define the boundaries of the energy that needs to be accounted, and conventions for those data which can’t be measured, with the underlying criterion that direct measurement is always preferable.

The issue of boundaries – defining what constitutes “energy” in a statistical sense – is central to developing an energy balance. For all energy sources, the IEA clearly defines energy production at the point where the energy source becomes a “marketable product” (and not before). Defining boundaries can also lead to differences in the presentation of data in some cases – one example is that biogas is counted as primary product and not the energy of materials (including landfilled wastes, sewage sludge or agro-food industries wastes or products) from which the biogas was derived. The definitions of boundaries within an energy balance also impact the results. For example, all fuels used for transport are shown within the transport sector of final consumption – and not in the sector representing the economic activity where transport occurs. Meanwhile the use of energy products for non-energy purposes is shown in non-energy use.

It takes two main steps to develop an energy balance from the set of commodity balances. First, all the data are converted to a common energy unit. For the IEA, this means converting data into tonnes of oil equivalent (toe), defined as 107 kilocalories (41.868 gigajoules). Second, some re-formatting is performed to avoid double counting when summing data for all products together. For example, the production of secondary products (e.g. motor gasoline) appears in the production row in commodity balances, but is reported as an output of the relevant transformation (e.g. oil refineries) in an energy balance, as there the production row only refers to production of primary products (e.g. crude oil).

The main methodological choices underlying energy balances that can differentiate the final layout include: “net” versus “gross” energy content (where the IEA uses net); calorific values (where the IEA uses national data wherever possible); and “primary energy equivalent” conventions.

When it comes to electricity from non-combustible sources, the IEA, in line with IRES, adopts a coherent principle across sources – the “physical content method” – by measuring the primary energy equivalent at the first point downstream in the production process for which multiple energy uses are practical. This means that hydro, wind and solar become “energy products” in the statistical sense at the point of generation of electricity, and that their “primary energy equivalent” is computed as the electricity generated in the plant, while the kinetic energy of the wind or the water does not enter the “energy balance”, although being “energy” in a scientific sense.

The IEA had at a point used the “partial substitution method”, based on the assumption that hydro, wind, solar electricity had displaced thermal generation. This involved using an average thermal conversion efficiency (e.g. 36%) to back-compute their corresponding “primary energy equivalent”. This made their shares in the primary energy supply greater (around three times as much). However, the principle was abandoned as it relied on arbitrary conversion factors and was creating some transformation losses inside the energy balance that did not really exist.

The energy balance is a statistical accounting tool, with internationally agreed standards that have evolved based on in-depth, broad consultation. The tool is best used with awareness of what messages can be extracted from what data, and with all analysts properly understanding the framework in the context of providing advice.

For example, many international targets on renewables, such as those in the EU Directive, in the UN Sustainable Development Goals or in the Sustainable Energy for All Global Tracking Framework, have been set by looking at final consumption shares. So when discussing such policies or targets, the IEA encourages all users to have a full assessment of the energy mix by looking at not only shares in total primary energy supply (TPES), but also in electricity generation, and in total final consumption as these are not impacted by the methodological choice described above.