Despite the need for significant increases in energy efficiency investment in the coming years, growth stalled in 2018... 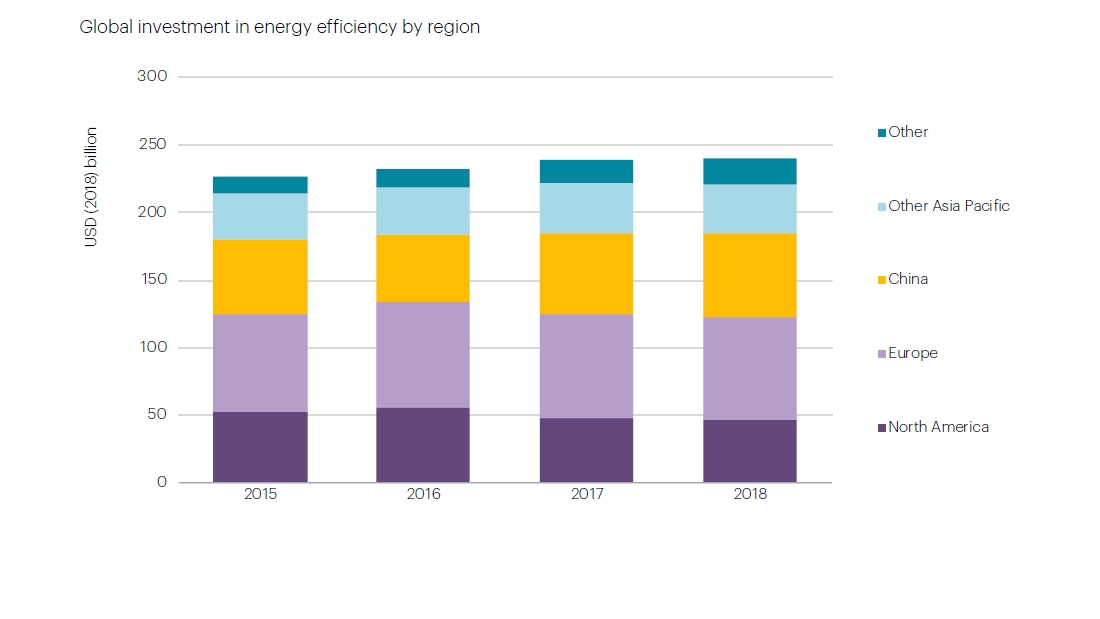 Note: An energy efficiency investment is defined as the incremental spending on new energy-efficient equipment or the full cost of refurbishments that reduce energy use. The intention is to capture spending that leads to reduced energy consumption. Under conventional accounting, part of this is categorised as consumption rather than investment.

The buildings sector is still the largest destination of energy efficiency expenditures. However, for the first time since the World Energy Investment started publishing estimates, growth in investment in buildings energy efficiency has faltered. In 2018 it declined by 2% to USD 139 billion.

Transport energy efficiency grew modestly between 2017 and 2018, mainly in freight. Global car sales were stable in 2018, with a continued rise in market share by less-efficient light-duty trucks. Heavy-duty vehicle sales rose in Europe, China, and the United States, while new vehicle standards in India (2018) and the European Union (2020) are expected to support more efficiency-related spending.

Due to higher incremental prices of electric vehicles (EV), EV sales growth is having an increasing impact on overall transport efficiency investment. But, as battery prices fall, this price gap is narrowing.

...as spending for efficient buildings fell for the first time in four years 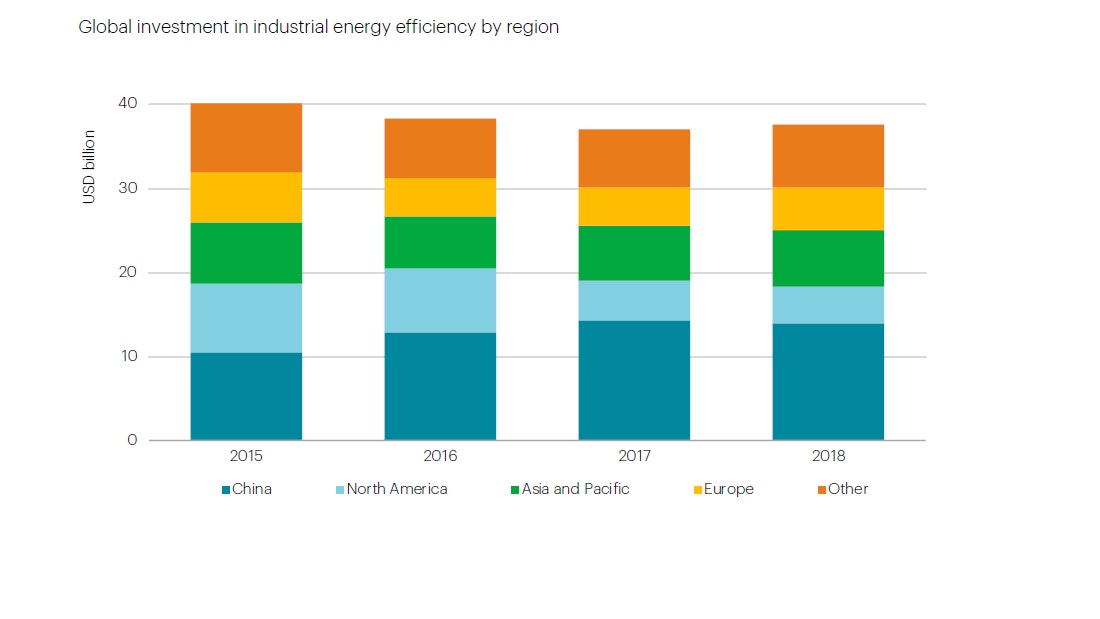 Note: For the industry sector, the incremental investment includes both an estimate of industry investments in equipment to realise energy intensity gains and investment in energy management systems to unlock system-wide efficiencies.

Investment in industrial energy efficiency was less than USD 40 billion in 2018. While total investment in industrial energy efficiency has been relatively constant since 2015, the market composition has shifted. China represented 37% of the total in 2018, up from a quarter in 2015. North America, which comprised 17% in 2015, was below one tenth of the total in 2018.

At just over 45%, heavy industry represents a smaller share of global industrial energy efficiency investment than in 2015, when it was nearly half of the total. This largely reflects the continuing slowdown in the construction of new energy-intensive industrial facilities in China, which is the result of ongoing structural change in the Chinese economy, as well as in Europe and North America.

India is an emerging source of industrial energy efficiency investment in the Asia and Pacific region, which grew by nearly 5%. Modernisation of industrial facilities coupled with strong mandatory government policy, through the Perform, Achieve, Trade (PAT) Scheme, are important factors driving greater levels of investment.

...as growth in China has offset a continued decline in US spending

Global investment in energy efficient buildings dipped by 2% to under USD 140 billion in 2018. Even as China and the United States remained relatively stable, spending has decreased in Europe, particularly in Germany.

In the United States, total incremental spending on buildings energy efficiency has been broadly unchanged in recent years. Overall investment in construction, however, has risen in the residential and non-residential sectors, with an average nominal growth of 3.8% since 2015, reaching USD 1.4 trillion. Therefore, the share of total construction investment that is dedicated to reducing energy use in buildings in the United States is in decline, and currently stands at just 2%.

In the buildings sector, energy efficiency investment is falling far short of the significant growth needed to meet sustainability goals 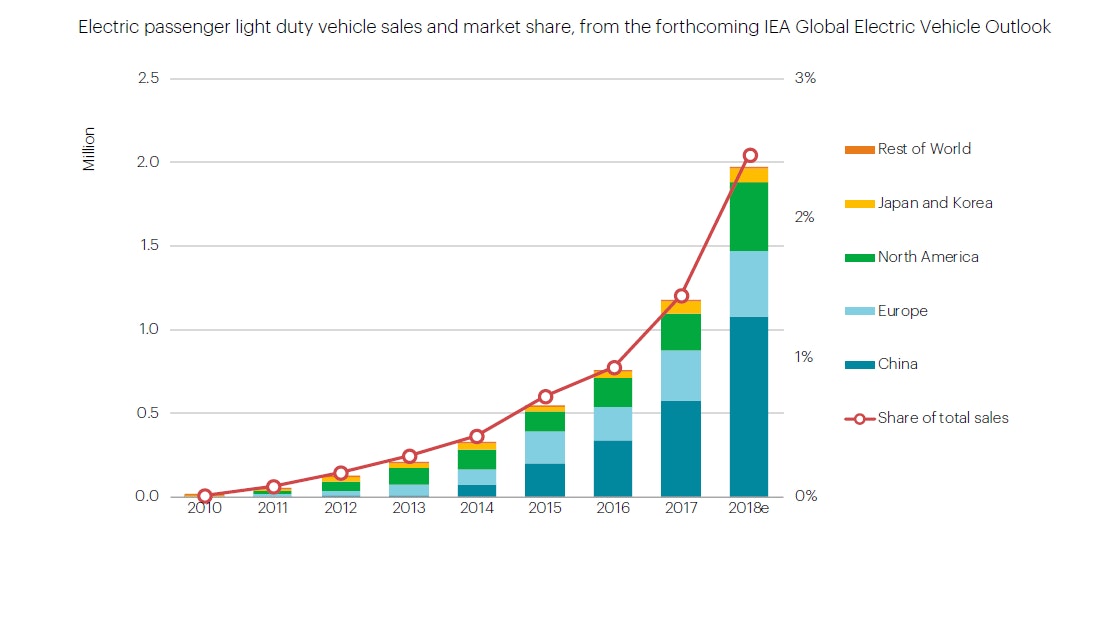 Global electric passenger car sales reached almost 2 million vehicles in 2018, a nearly 70% increase compared to 2017 and the strongest rate of growth since 2013. The stock stood at more than 5 million at the end of 2018 (details will be available in the forthcoming IEA Global EV Outlook 2019).

China, the world’s largest electric car market by far, drove the overall trend. Over 1.1 million electric cars were sold in 2018, similar to the total number of all cars sold in Mexico that year, and comfortably surpassing all the new cars registered in Africa. While electric car sales increased, overall passenger vehicle sales in China declined in 2018.

Europe and the United States were the second- and third-largest electric car markets, with sales of 385 000 and 360 000 units, respectively. In Europe, Norway remains the global leader in terms of electric car sales penetration, approaching 50% in 2018, more than 2.5 times as high as the next highest country, Iceland. Norway was also the leader in terms of sales volumes, followed by Germany, the United Kingdom and France.

Sales in the United States rose faster than the rate of the global market, a big increase compared to just 24% growth the year before. This was spurred by the release of the Tesla Model 3, of which 134 000 were registered in 2018. Japan is the only major electric car market where sales decreased.

With 26 million new units in China in 2018, electric two- and three-wheelers still outsell electric cars by more than ten times. Around 92 000 electric buses were added to the global fleet in 2018. Globally, electric cars and buses sold in 2018 are expected to offset 0.1 million barrels per day (mb/d) of transport oil demand growth. Electricity demand from electric vehicles (including two- and three-wheelers) sold in 2018 is estimated to be around 12 TWh per year, 1% of 2018 global power demand growth. 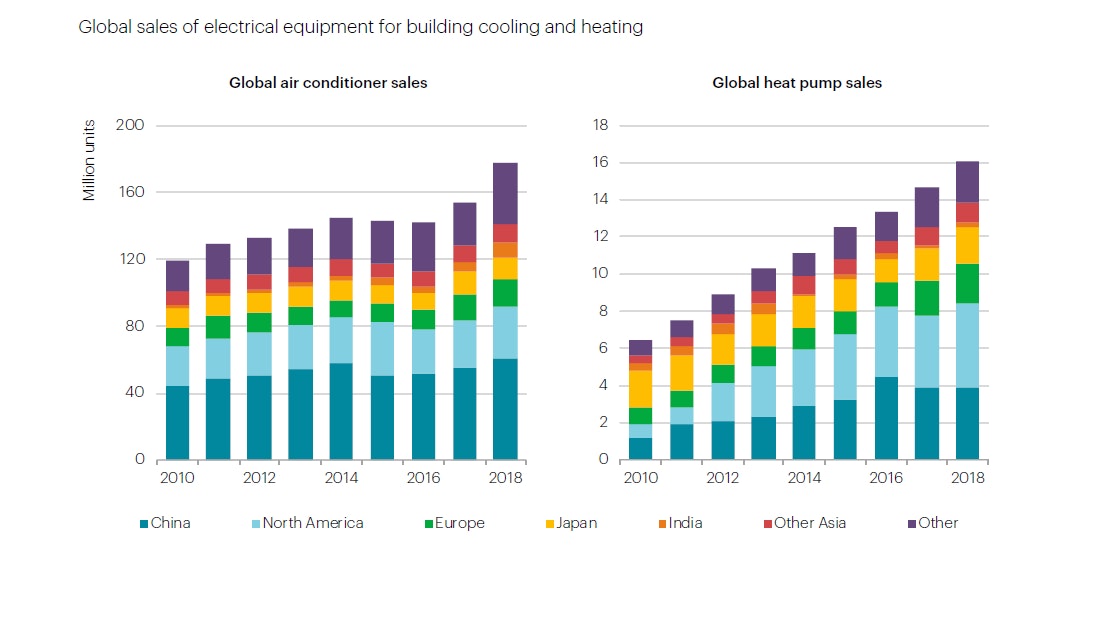 Note: Heat pump sales are those for primary use in heating, and include air-to-air and air-to-water heat pumps Source: IEA analysis with calculations partly based on BSRIA (2018) and company and industry association disclosures.

Global air conditioner sales grew by their largest annual increase, with 16% growth to over 175 million units in 2018. Annual variations in sales are linked to weather patterns and the exceptional growth in 2018 was driven in part by extreme weather and prolonged heat waves.

Much of the growth in air conditioner sales was led by India, North America (especially Mexico), Brazil, the Middle East, and China. China’s market remains the world’s largest and is not yet saturated.

Rising demand for space cooling is already putting enormous strain on electricity systems in many countries, as well as driving up emissions. Space cooling can represent as much as 50% or more of peak electricity demand on hot days in regions with high air conditioning demand. CO2 emissions from cooling have tripled since 1990 to 1.1 billion tonnes, equivalent to the total emissions of Japan.

There is huge scope to reduce the gap between the most energy efficient air conditioners on the market and the market average, which is often only half as efficient. Improved regulations and more efficient supply chains could reduce cooling energy consumption by as much as three to five times.

Heat pump sales remain an order of magnitude smaller than air conditioner sales, but maintained nearly 10% annual growth. This was despite a slowdown in China as policy incentives waned. North America became the largest heat pump market again. Overall, heat pumps comprise around 2.5% of the sales of global building heating equipment, but this share is growing.

Since 2016, growth in heat pump sales has been pushed by Europe and Japan. European sales have been boosted by market incentives, including the eligibility of heat pumps to count towards EU renewable energy targets.

...while Europe and North America sustained the growth in heat pump sales 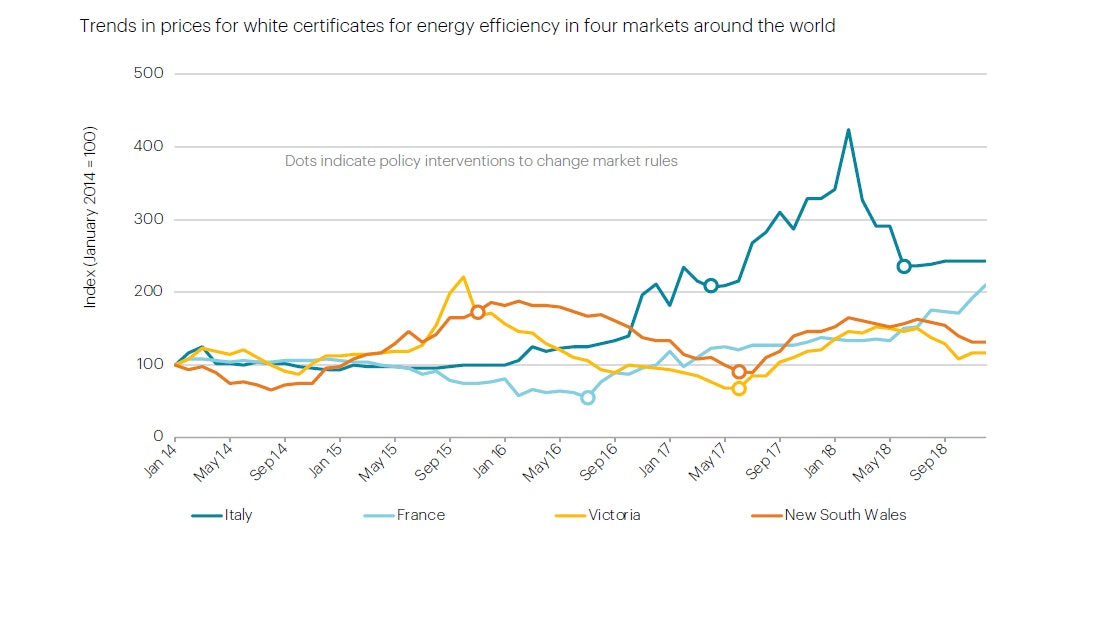 Note: France data is a weighted average of Fuel Poverty certificates and Classic certificates, weighted by volume. Dots indicate major policy interventions to change the market rules. These include (from left to right): changes to the eligibility of lighting projects in New South Wales, Australia; reservation of 25% of the French market for fuel poverty certificates; tightening of eligibility criteria in Italy; changes to eligibility of lighting projects in New South Wales and Victoria, Australia; cap on certificate prices in Italy. Source: IEA analysis with calculations based on EMMY (2019); GME (2019);TFS Green Australia (2018).

Trends in the price of white certificates were mixed across global markets, affecting the returns from eligible energy efficiency projects. White certificates allow energy savings from efficiency projects to be traded in European and Australian markets by obligated parties, generally final energy suppliers, such as electricity and gas retailers. They have been in operation for just over ten years, and policy makers are continuing to learn how to make them more effective.

White certificate prices remain volatile, largely due to policy interventions that change market rules and raise or lower prices. Policy makers intervene in the markets to stop price declines and encourage investment in different project types, for example those with higher social value, or to limit the costs to consumers. One reason behind the periods of low or declining prices is the banking of certificates from low-hanging fruit projects, such as lighting, between trading periods to reduce future liability.

The Italian white certificate market has been through a period of high volatility, which ended in 2018 after the introduction of a price cap in response to a high price peak following a tightening of the project eligibility criteria. Demand for eligible projects and certificates remains strong, with prices not falling below the cap following its introduction.

In the two Australian markets of Victoria and New South Wales, prices in 2018 rose after changes to the relative value of lighting projects prompted clamour for existing certificates, but then fell back.

In France, company targets have been increased, and prices for classic certificates have risen faster than those dedicated to fuel poverty projects. Year-on-year price rises can indicate that these markets are moving up the cost curve of efficiency projects, improving returns for eligible projects.

...as policy and rule changes continue to shape price trends