Southeast Asia is, in terms of electricity demand, one of the fastest-growing regions in the world. Driven by the growing ownership of household appliances and air conditioners, as well as increasing consumption of goods and services, demand has grown by more than 6% annually over the past 20 years on average. Of the region’s ten countries, the four largest by electricity consumption, Indonesia (26%), Viet Nam (22%), Thailand (19%) and Malaysia (15%), make up more than 80% of total demand in the region.

The economic impact of the Covid-19 pandemic in the ASEAN countries is visible in reduced electricity demand, which is expected to drop by around 1% this year. For the full year, Indonesia’s demand is expected to stagnate, after a reduction of almost 11% in May. Viet Nam’s demand in the first ten months of the year is reported to be 3.2% above the same period of 2019 – after around 10% average growth in the past ten years. Compared to the respective periods in 2019, Thailand’s demand dropped by 3.7% in the first eight months, while Malaysia’s was down by 5% in the first ten months.

Southeast Asia is one of the few regions of the world where coal-fired generation has been expanding, with close to 20 GW of new coal-fired generating capacity under construction, mostly in Indonesia (a major coal producer), Viet Nam and the Philippines. Significantly more capacity is at the pre-construction stage, but some plans are being reconsidered and greater emphasis is being placed on natural gas as well as the expansion of renewables. One example of this is the Philippines, which at the IEA System Integration of Renewables Ministerial Conference, held on 27 October 2020, announced a moratorium on new coal-fired power generation.

The ASEAN community has put forward an ambitious project of regional development in order to support economic growth and the integration of higher shares of renewable energy. ASEAN as a region has a target of integrating 23% renewable energy by 2025. One of the ways of reaching that target is regional interconnection and trade.

A major project for regional integration is the ASEAN Power Grid – an initiative to connect the region, initially on cross-border bilateral terms, then gradually expanding to the sub-regional level and finally to a totally integrated Southeast Asia power grid system. 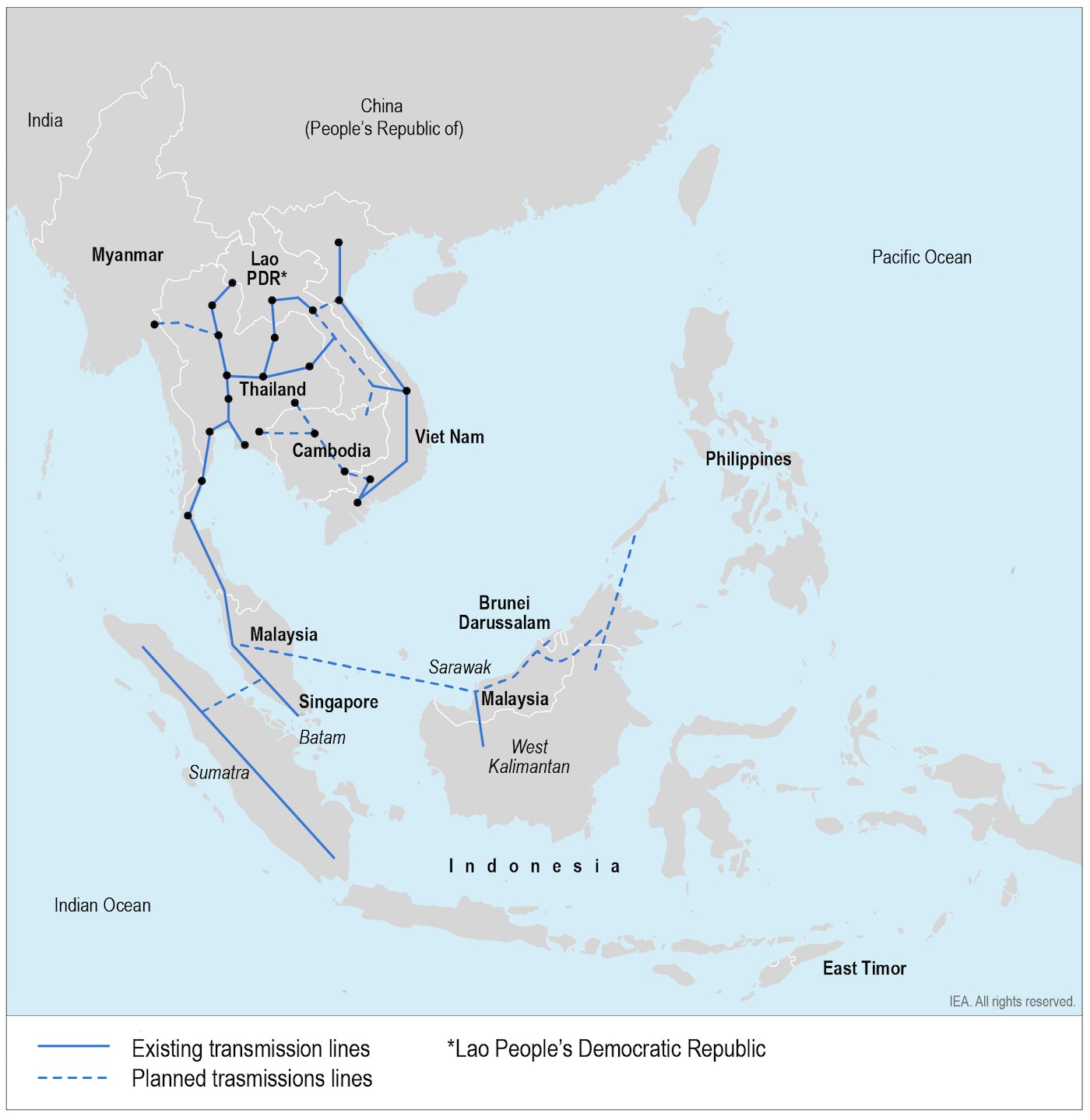 In order to optimise the use of the physical infrastructure, work is also being undertaken to develop the institutions of ASEAN. ASEAN has a project to develop multilateral power trade, which was supported by the 2019 IEA study Establishing Multilateral Power Trade in ASEAN, recommending clear actions to establish cross-border power trade in the region. Several institutions are involved in the project, including the Heads of ASEAN Power Utilities/Authorities and the ASEAN Energy Regulatory Network.

The Lao PDR-Thailand-Malaysia power integration project is one example of cross-border power trade in the region. The project has enabled 100 MW of power transfer from Lao PDR via Thailand to Malaysia. Work is already underway to extend the framework to include Singapore.

Due to the effects of the Covid-19 pandemic on the economy, Indonesia’s electricity demand is expected to stagnate in 2020 compared to 2019. This constitutes a significant reduction compared to the average annual growth rate of around 6% in the previous five years.

Indonesia is expected to become the fourth-largest economy in the world by 2040. Coal dominates the Indonesian power mix, supplying around 60% of its electricity in 2019, with natural gas and oil together accounting for around a quarter of the supply, with the remainder from renewables, mostly hydro and geothermal.

Current government policy aims to increase the role of renewables in the power mix, increasing their share of primary energy supply from 9.15% in 2019 to 23% in 2025 and 31% in 2050. A new presidential decree is expected that will introduce a feed-in tariff for projects smaller than 10 MW, while projects larger than 10 MW will be awarded via auctions.

The legislation is intended to incentivise more renewable investment from both domestic and foreign investors in order for Indonesia to achieve its renewables targets. The state-owned utility PLN plans to increase its renewables capacity from around 8 GW in February 2020 to around 24 GW in 2028. In addition to PLN’s renewable capacity, independent power producers are also able to invest in renewable generation. At a national level 10.7 GW of renewable energy is currently installed. Hydro and geothermal make up 57% and 21% of this generation capacity, followed by biofuels (18%) and solar PV (3%).

One innovative new development is the 145 MW Cirata floating solar PV project. It is a hybrid of floating solar PV and hydropower. The solar panels will be installed on a reservoir of the Cirata hydroelectric power plant, and smart controllers are due to be installed so that the hydro plant can help balance the intermittency of generation from the PV cells, which is especially variable in the rainy season. Being the largest solar PV project to be constructed to date, the project represents a milestone for Indonesia, taking advantage of innovative solutions and hybrid technology to ensure secure and affordable integration of variable renewable energy.

As an archipelago, Indonesia has not yet achieved 100% electrification, which is mainly due to the difficulty in electrifying remote islands. Those electrified to date rely on diesel generation units, although the utility PLN is implementing a plan to convert 152 of these units to use natural gas.

For the smaller systems, micro grids and small-scale renewable energy may be relevant, since it may not be economical to interconnect these regions to the rest of Indonesia.

As a land-constrained country, Singapore has to be innovative and creative to make the most of its limited space for electricity generation. With this in mind, Singapore has announced a target of 1.5 GW of solar by 2025 and 2 GW solar by 2030. The solar target is expected to be met by both rooftop and utility-scale floating solar.

To balance the variable production of the solar capacity, Singapore has a target to increase its energy storage. By 2025 Singapore aims to have 200 MW of storage, which in combination with advanced forecasting will help balance the system.

Singapore is involved in developing multilateral power trade. It is engaged both in ASEAN’s regional work and in the ambition to expand the Lao PDR-Thailand-Malaysia power integration project to include Singapore. Singapore is connected to Malaysia via two 230 kV AC lines, which allow the transfer of power from Malaysia to Singapore.

In its power sector strategy, Singapore relies on the so-called four switches – solar, regional integration, low-carbon alternatives and natural gas. As for low-carbon alternatives, Singapore is studying emerging technologies to further reduce carbon emissions such as hydrogen and CCUS. Natural gas is the main source of fuel for generating electricity. As such, one focus is on fuel security by ensuring import facilities through Malaysia and LNG terminals.

Generation in Singapore is almost entirely fuelled by natural gas: in 2019 almost 96% of its electricity was generated in this way. In the fourth quarter of 2019 total solar PV capacity was 353 MW, increasing to 388 MW in Q2 2020. The majority of the capacity comes from utility-scale solar PV, with residential PV making up just 13.5 MW of the total installed capacity.

In January Thailand was the second country in the world to confirm a Covid-19 case. The government’s response to an increasing number of cases, considered a success by the WHO, included a wide-ranging lockdown declared on 21 March and followed by a night-time curfew from early April to mid-June. The measures taken were reflected in falling electricity demand. A 2.9% year-on-year reduction in March (after more than 3% growth in January and February) was followed by between 7% and 10% lower demand from April to June compared to the same months in 2019 (demand was additionally dampened by large storms in June). In July and August demand started to recover, but was still around 3% lower in August compared to the previous year.

Thailand’s total installed generation capacity was 47 GW in 2019, with 30 GW from gas-fired power plants, 6 GW from coal and 11 GW from renewables (including 4 GW of hydropower capacity built in neighbouring countries specifically to export their power to Thailand). Peak electricity demand in 2019 was around 30 GW. CO2 emissions from the power sector have plateaued since 2013, due to the increasing share of clean energy resources.

With the global trend towards energy transition and renewable energy, Thailand has a broad set of policies to cost-effectively accelerate the uptake of cleaner energy This includes renewable energy as well as LNG as part of Thailand’s Energy Master Plan. Under this plan sit the Power Development Plan, the Alternative Energy Development Plan, the Energy Efficiency Plan, and Oil and Gas plans. Recent versions of these plans were endorsed by the Cabinet in October 2020.

The latest Power Development Plan (PDP 2018 Rev.1) aims to provide a transition roadmap for the power sector with three key principles: energy security, economic sustainability and environmental sustainability. The renewable energy target for electricity (excluding imported hydro) is set at 29% of total generation by 2037, with an additional 6% energy efficiency target. In terms of capacity, renewables are expected to reach 29 GW, which accounts for around 35% of total capacity in 2037. The transition in the power sector is supported by policy development that covers digitalisation, decarbonisation, decentralisation, deregulation and electrification.

Grid modernisation is a prominent part of the latest Power Development Plan to improve the reliability, resilience and flexibility of the power system in response to the rapid uptake of emerging technologies, particularly VRE. As recommended in the Thailand Renewable Grid Integration Assessment conducted by the IEA in 2018, a number of flexibility options could be implemented to enable the cost-effective and reliable integration of VRE. This has subsequently led to the launch of power plant flexibility pilot projects in Thailand by the national electric utility. There are also other pilot projects to provide system flexibility, including a 45 MW hybrid hydro floating solar PV and utility-scale battery energy storage system.

With the lower than expected demand growth in recent years (less than 3% annual growth), Thailand’s power sector is facing the issue of generation overcapacity and a high reserve margin, which has been in the range of 40%. This situation is expected to become more prominent in the coming years due to the impact of Covid-19. A number of options are being considered, including retirements of ageing power plants with relatively low efficiency and delaying investments in large-scale fossil fuel power plants to allow for an effective utilisation of existing power plants in the system.

Covid-19 has reduced overall electricity demand in Thailand since March 2020 compared to the same period last year, as a result of lower economic activity in the commercial and industrial sectors and despite increases in residential demand. The impact is expected to continue in the medium to long term. As a result stimulus and recovery measures have been put in place to counter the shocks to the economy and to support the growth of renewable energy. One of the priorities is implementation of the “energy for all” policy, which promotes community-based power plants using local infrastructure and renewable energy resources, particularly biofuels in rural areas. This policy aims to boost the economic benefits and create jobs in local communities, as well as raise the value added of agricultural products.