By further developing their regional electricity grid, Tajikistan and its neighbours can make full use of their infrastructure and resources, thereby maximising the potential value of Tajikistan’s surplus hydropower and helping advance renewable energy throughout the region, according to the International Energy Agency.

Tajikistan’s National Development Strategy has set out a goal to more than triple its electricity exports to at least 10 terawatt-hours annually by 2030 – equivalent to about half the amount of electricity it generates overall today – which would bring much needed revenue to the country’s state-owned utility.

The IEA developed its energy policy Roadmap on Cross-Border Electricity Trading for Tajikistan as part of its work through the EU4Energy Programme. The Roadmap is being launched today as part of a Cross-Border Electricity Trading Workshop, featuring input from the Tajik Ministry of Water and Energy Resources, as well as the Asian Development Bank and United Nations Economic and Social Commission for Asia and the Pacific.

With existing and planned infrastructure, Tajikistan could unlock several cross-border electricity trading opportunities within the next decade by investing in developing its regulatory and market institutions and encouraging neighbouring countries to do the same.

To take advantage of its unique hydropower advantages, Tajikistan could refurbish and upgrade its facilities to improve technical flexibility, which would increase its ability to provide additional ancillary services to its neighbours in the regional market as they ramp up the share of variable renewables in their power generation mix.

By developing a modern power sector, Tajikistan could deliver financial benefits to its citizens and environmental benefits to the wider region through the expanded use of its hydropower resources.

The programme’s aim is to work with these countries to improve energy data capabilities, enhance data collection and monitoring, and assist with evidence-based energy policy design relevant to country needs.

The central purpose of this report is to guide policy making at all levels to facilitate effective cross-border integration of electricity markets to the benefit of Tajikistan as well as the region. This report can serve as a roadmap to support the Tajikistan’s National Development Strategy for 2030, which includes goals to export at least 10 TWh of its hydropower generation and to undertake reforms to improve the performance and sustainability of its power sector. 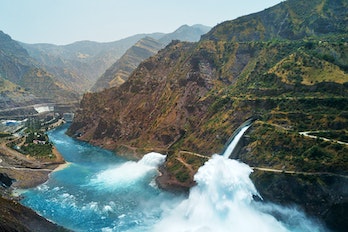