Azerbaijan is rich in oil and natural gas resources. At the end of 2017, its oil reserves of 7 billion barrels (1 Mt) accounted for 0.4% of global reserves, according to the June 2018 BP Statistical Review of World Energy. Oil is produced both onshore and offshore in the Caspian Sea, with offshore production accounting for about one-quarter of the total (www.minenergy.gov.az, 2015).

The Azeri-Chirag-Deepwater Gunashli (ACG) field, located about 100 km east of Baku, is the largest oilfield in the Azerbaijan sector of the Caspian Basin. Discovered in the early 1970s when Azerbaijan was part of the Soviet Union, it comprises a series of individual reservoir horizons located 2 000 metres to 3 500 metres beneath the Caspian seabed. A PSA was signed in Baku in September 1994 by the Government of Azerbaijan and a consortium of 11 foreign oil companies.

Azerbaijan has an estimated 1.3 trillion cubic metres of proven natural gas reserves, and according to the operator (BP), the Shah Deniz gas field is one of the world’s largest at more than 1 000 bcm. While Azerbaijan is not as large a figure in global gas as it is in oil, gas extraction is expected to continue contributing significantly to the economy in the coming decades.

The country’s energy mix is heavily concentrated on fossil fuels, with oil and gas accounting for more than 98% of total supply. While supply security is not a concern, heavy reliance on fossil fuels elevates GHG emissions and exposes the country to fuel price fluctuation risks. In addition, although ageing natural gas networks have been significantly modernised with new compressor stations and ancillary infrastructure, distribution system losses and quality of gas supply remain concerns.

Electricity generation is dominated by natural gas (90%), while large hydro generates 8%. Electricity supply security improved over the 2007‑17 decade with modernisation of the generation system and strengthening of the west-east transmission network; additional gas-fired generation capacity has reduced the frequency of electricity shortages, and the hydropower projects also made shortages less common. As resource-related income has boosted the growth of the middle class, demand for electricity has increased, making further capacity additions necessary.

The State Strategy on the Use of Alternative and Renewable Energy Sources in Azerbaijan for 2012‑20 provided key directions for the production of electricity and heat from renewables. To date, the focus in renewable energy has been on small hydro and wind power, with more than 300 megawatts (MW) of new renewables capacity in planning or development. According to the 2016 Strategic Roadmap, the government plans to diversify energy portfolio of the country and to create an additional total 420 MW of renewable generation capacity, with 350 MW of wind, 50 MW of solar and 20 MW of biomass capacity.

Along with the oil and gas sector, the electricity sector plays a leading role in Azerbaijan’s social and economic development. Large investments in power generation and transmission since 2009 have resulted in remarkable improvements in the quality of power supply. Electricity generation is now sufficient to cover domestic demand, and the power system is capable of supplying electricity of acceptable quality to almost the entire population.

Azerbaijan has a total installed capacity of over 7.5 gigawatts (GW): 6.5 GW of oil- and gas-fired generation and 1.1 GW of hydro. In addition, the country has a small amount of wind, solar and other renewable generation.

Investment in new gas-fired generation capacity in the electricity sector has been notable, with capacity increasing by around 2 GW since 2005. In 2013, the 780 MW Janub power plant in Shirvan was commissioned. The construction of the Shimal-2 power plant was completed in 2019, adding another 400 MW into the system. Also, the 36 MW Ordubad hydropower plant in the Nakhchivan Autonomous Republic is under construction and measures are being taken to build a 385 MW modular power plant in the Gobu district.

The power network includes 70 high-voltage substations and over 7 600 km of lines.

Azerbaijan has been exporting electricity since 2007. In 2019, it exported around 1.5 TWh to Georgia, Russia and Turkey. The transmission capacity with Russia is around 350 MW.

With Georgia, Azerbaijan has two cross-border connections: the 500 kV Samukh-Gardabani (650 MW of export capacity to Georgia and to Turkey via transit) and the 330 kV Agstafa-Gardabani line.

With Iran, Azerbaijan has five cross-border connections: 330 kV Mugan, 230 kV Imishli and 110 kV Astara-Astara, owned by Azerenergy open joint stock company (OJSC); and 132 kV Araz-Araz and 132 kV Julfa-Julfa lines, owned by Nakhichevan State Energy Service. The current cross-border capacity is 600 MW (http://minenergy.gov.az/en/elektroenergetika/musteqillik-elde-edildikden-sonra-elektroenergetikanin-inkisafi1991-ciilden-sonraki-ucuncu-dovr). In co‑operation with Iran, two hydropower plants are being constructed: the 200 MW (100 MW for each side) Khudaferin and the 80 MW (40 MW for each side) Maiden Tower.

As Azerbaijan is at the centre of the Trans-Caucasus interconnected power system, and has a relatively long distance between its generation and load centres, it necessitates a backbone of large transmission lines. In recent years, Azerbaijan has modernised  transmission and distribution facilities and managed to reduce outages and network losses to less than 10% of the total generation.

Azerbaijan has three crude oil export pipelines. About 80% of the country’s oil is exported through the Baku-Tbilisi-Ceyhan (BTC) pipeline, which began operations in 2006 and has a capacity of 1.2 million barrels per day. It transports crude oil produced at the ACG field as well as condensate produced at Shah Deniz from the Sangachal terminal near Baku through Georgia to the Mediterranean port of Ceyhan in Turkey; from there the oil is shipped by tanker to world markets. The BTC pipeline is 1 768 km long, with 443 km in Azerbaijan, 249 km in Georgia and 1 076 km in Turkey. As it has ample free capacity, it also transports some Turkmen and Kazak oil (www.bp.com/en_az/caspian/).

The Baku-Novorossiysk pipeline runs from the Sangachal terminal on the Caspian Sea to the Novorossiysk terminal on the Black Sea in Russia. It is 1 330 km long with a capacity of 105 000 barrels per day (b/d) and has been operating since 1996; SOCAR operates the Azerbaijani section and Transneft operates the Russian section. Despite proposals to increase the pipeline’s capacity, which would be a key transportation addition as production expands in the Caspian Sea, operation of the pipeline was halted in 2014 and resumed in 2015 at lower loading levels.

The Baku-Supsa pipeline transports crude oil from offshore oilfields in the Caspian Sea to Supsa, Georgia, on the Black Sea where it continues to European markets via tankers. It is 833 km long with a capacity of 145 000 b/d and has been in operation since 1999 http://socar.az/socar/en/activities/transportation/baku-supsa-western-export-pipeline.

Azerbaijan became a net exporter of natural gas in 2007 with the start-up of the huge Shah Deniz natural gas and condensate field; before then it imported gas from Russia.

The country has two main gas export pipelines. The largest is the South Caucasus Pipeline (SCP) that transports gas from the Shah Deniz field through Georgia to Turkey parallel to the BTC crude oil pipeline. The SCP is 693 km long (443 km in Azerbaijan and 250 km in Georgia) and has a capacity of 7 bcm.

The second export pipeline is the Hajigabul - Mozdok, which transported natural gas from Russia to Azerbaijan until 2007 when an agreement between SOCAR and Gazprom allowed the pipeline’s flow to be reversed, and gas exports to Russia began in 2010. The pipeline has an annual capacity of 10 bcm. It is 680 km long, 200 km of which is in the territory of Azerbaijan. The operators of this pipeline are SOCAR and Gazprom (Russia). (http://minenergy.gov.az/en/qaz/cenubi-qafqaz-boru-kemeri-cqbk).

Shah Deniz II and the SCP pipeline are key parts of the Southern Gas Corridor infrastructure project to deliver Caspian gas to the EU. The other parts are the Trans-Anatolian Pipeline (TANAP) crossing Turkey to Greece and the Trans-Adriatic Pipeline (TAP) from Greece via Albania to Italy. TANAP was officially brought online in Turkey In June 2018 and TAP is expected to be commissioned in late 2020.

TANAP has potential to expand to 24-31 bcm/year, while TAP will have an initial capacity of 10 bcm per year. The Southern Gas Corridor is a joint project of several major international companies, including SOCAR. 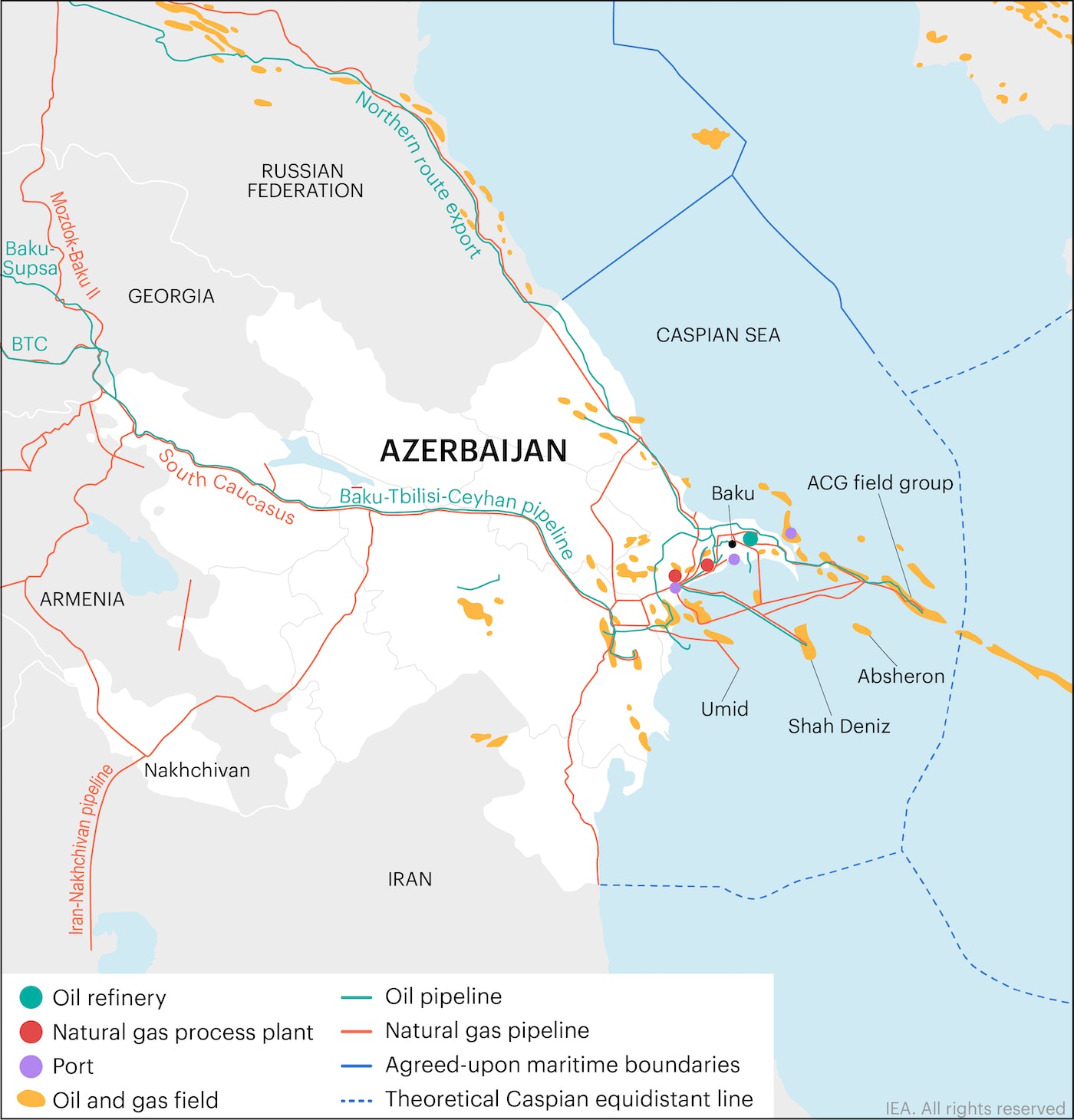 Established in 2005, the Ministry of Emergency Situations is responsible for emergency response mechanisms in all sectors of the economy. Its mandate includes natural and human-caused disasters and fire, as well as emergency situations involving power system incidents, utility systems, hydropower facilities, oil and gas production and processing facilities and main pipelines. It provides policy measures in the fields of civil defence, rescue and restoration works (www.fhn.gov.az).