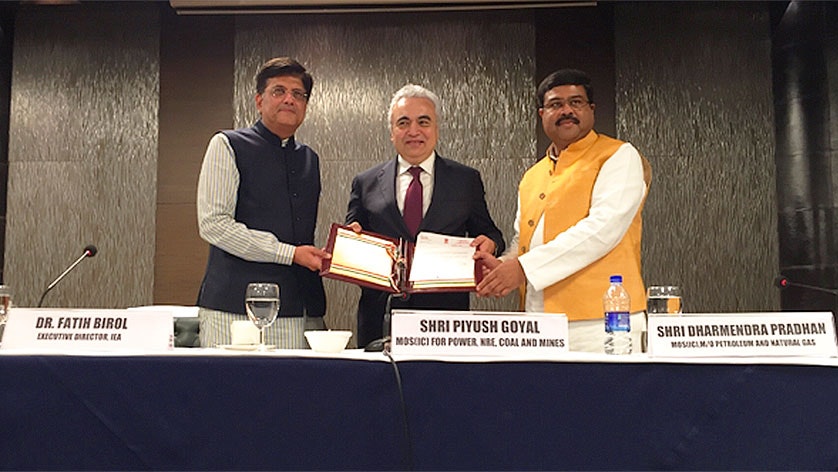 NEW DELHI – The International Energy Agency welcomed India as an Association country on Thursday, expanding its partnership for a more secure and sustainable energy future with the world’s third-largest energy consumer.

As India moves to the centre of global energy affairs, the new institutional ties with the IEA mark a critical addition to the IEA’s global outreach. India is one of the bright spots of the global economy and is emerging as a major driving force in global energy trends, with all modern fuels and technologies playing a part.

“We can’t talk about the future of the global energy markets without talking with India,” said Dr Birol. “This is a major milestone in the development of global energy governance, and another major step toward the IEA becoming a truly global energy organization, strengthening ties with the key energy players that make up the IEA family.”

Thanks to rising income, population growth and urbanization, there is a huge potential for energy demand growth in India, which is home to about a fifth of the world’s population but uses only about 6% of the world’s energy. India’s energy demand is expected to more than double over the next 25 years, according to the IEA’s India Energy Outlook. These findings were presented by Dr Birol to Prime Minister Narendra Modi when they met last year.

Prime Minister Modi has put in place policies to press ahead with the country’s modernization, including a major transformation of energy provision. An ambitious programme is underway to expand and upgrade the electricity sector, including a commitment to reliable and affordable power under the “24x7 Power for All” initiative, as well as a major push to deploy solar and wind power. Other energy-sector reforms focus on improving incentives to produce oil and natural gas, promote energy efficiency and increase access to modern fuels.

“This is a landmark day in terms of India's engagement in global energy markets,” said Minister Goyal. “IEA Association will help India plan better and serve the needs of Indians better, ensuring energy security for days and years to come.”

Minister Pradhan added, “IEA has helped in promoting understanding of India’s interests and concerns as the third-largest consumer of energy. I am confident that Association status for India will bring mutual benefit for both IEA and India.”

Dr Birol also thanked Dr Arvind Panagariya, Vice-Chairman of the National Institution for Transforming India (NITI-Aayog), for their continuous support. The IEA and NITI-Aayog are committed to deepening their cooperation.

Thanks to its unmatched expertise in global energy market and policy analysis, the IEA can support India’s efforts and collaborate in its energy transition. With India, the IEA’s growing family now accounts for about 70% of the world’s total energy consumption. The other IEA Association countries are China, Indonesia, Thailand, Singapore and Morocco.