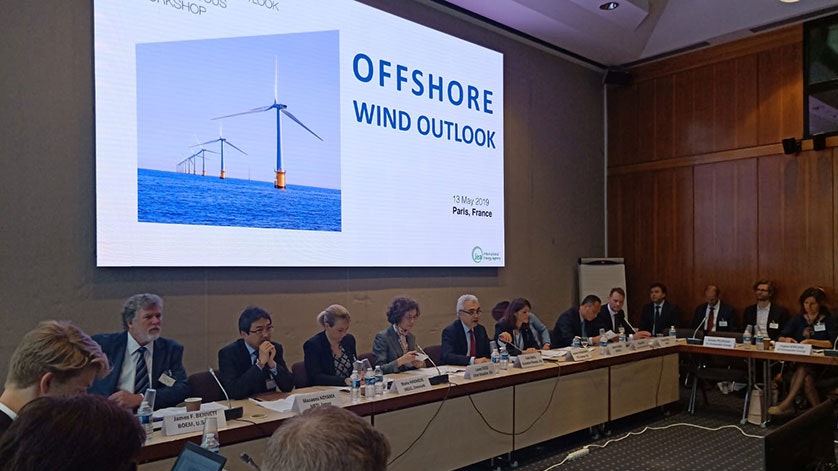 Participants from around the world discussed future development plans for offshore wind at the workshop. (Photo credit: IEA)

The IEA held a high-level workshop on the outlook for offshore wind energy on Monday, bringing together 80 senior representatives from government, the private sector, research groups, academia and international organisations.

Participants joined from countries around the world, including many from Europe, the United States, Japan and China. Altogether, the countries represented at the workshop account for 97% of current and planned offshore wind development.

Renewable energy is changing the nature of electricity supply, and offshore wind power has great potential to contribute to cleaner and more secure power systems. Technological improvements for offshore wind are improving performance and lowering the costs of the electricity it produces, drawing interest from markets across the globe.

Monday’s workshop covered the current status of and regional policy plans for the development of offshore wind, along with the key opportunities for accelerating deployment and the main challenges constraining growth. It took place in support of the first in-depth look at offshore wind in the World Energy Outlook (WEO), the IEA’s flagship publication.

“We must accelerate the deployment of all low-carbon technologies, from renewables to nuclear power to carbon capture, utilisation and storage,” Dr Fatih Birol, the IEA’s Executive Director, said in his opening remarks. “Our analysis has shown that decarbonising electricity as rapidly as possible is at the heart of any sustainable energy future, and offshore wind has a major role to play in this effort.”

Renewables capacity growth worldwide stalled in 2018 after two decades of strong expansion. At the same time, additional electricity supply from renewable sources failed to keep pace with the rapid growth in electricity demand. As a result, the power sector accounted for almost two-thirds of the global increase in CO2 emissions, which reached an all-time high in 2018. In this context, tapping the potential of offshore wind alongside other low-carbon technologies will be critical to achieving global sustainable development goals.

Dr Birol will launch the WEO Special Report on Offshore Wind in October in Copenhagen, Denmark, alongside the Danish Prime Minister. The World Energy Outlook 2019 will be launched on 13 November.