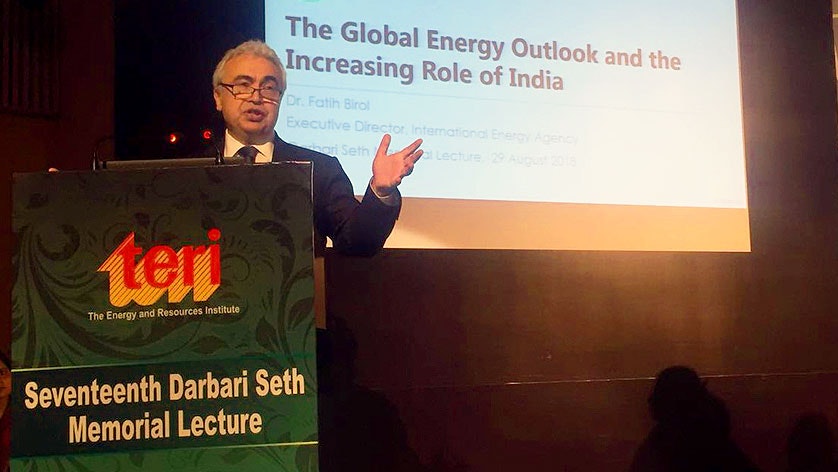 Dr Fatih Birol, the IEA’s Executive Director, arrived in New Delhi on Wednesday for an official visit to meet with government leaders – including four ministers –  and high-level officials and to deliver the Darbari Seth Memorial Lecture.

The Darbari Seth Memorial Lecture series was created by The Energy and Resources Institute (TERI) and has been held annually since 2002. This year’s lecture was opened by Minister for Power and New and Renewable Energy, Mr R K Singh, who commended the IEA’s contribution to global energy analysis and the substantive progress it is making to “open its doors” to emerging countries.

“A key reason for India’s success in renewables is that supportive policies and the tendering of large projects is helping investors take advantage of economies of scale,” said Dr Birol in his lecture. “Since 2014 solar PV capacity has grown over threefold and wind has grown nearly fivefold.”

Following the lecture, Dr Birol met with Minister Singh, with their discussions focusing on the country’s efforts to promote renewable energy deployment. Dr Birol also met with Mr Dharmendra Pradhan, Minister for Oil and Natural Gas, to discuss global oil and gas markets, India’s efforts to promote bioenergy, and its progress on building oil stocks to improve its energy security. Dr Birol then met with Mr Piyush Goyal, Minister for Railways and Coal where he highlighted the IEA’s work on rail transport, including the upcoming Global Railway Outlook which will include a special focus in India. This publication will be informed by a high-level workshop to be held in Paris on 24 September, organised jointly with the International Union of Railways.

The Executive Director was also invited to meet with Mr Shri T S Tirumurti, Secretary of Economic Relations at India’s Ministry of External Affairs to discuss India’s growing role in global energy governance and the IEA’s efforts to “open its doors” to India and other emerging economies.

Later in the visit, Dr Birol met with Dr Harsh Vardhan, Minister of Science and Technology and Dr Renu Swarup, Secretary of the Department of Biotechnology, to sign a memorandum of understanding on cooperation in the areas of energy research and development and innovation. Minister Vardhan spoke of Indian leadership on energy innovation through Mission Innovation and plans for his ministry to work closely with the IEA in the future to access global best practices.

Finally on Thursday, Dr Birol met with Mr Amitabh Kant, CEO of NITI AAyog, to review the deepening of cooperation between IEA and India, ranging from enhancing the quality of data and statistics to policy advice to aid the building of a more flexible power system. Dr Birol and Mr Kant pledged to work even closer on energy policy analysis.

In parallel with Dr Birol’s visit this week, the India-IEA Oil Stockholding Workshop was held in New Delhi. This workshop gave the opportunity for IEA member countries, together with Indian oil companies, to share views on the design of India’s strategic reserve. The IEA commended India on the strides the country has taken towards strengthening its energy security by building strategy petroleum reserves. The IEA also stressed the importance of cooperation among countries to ensure global energy security during periods of oil supply disruptions.