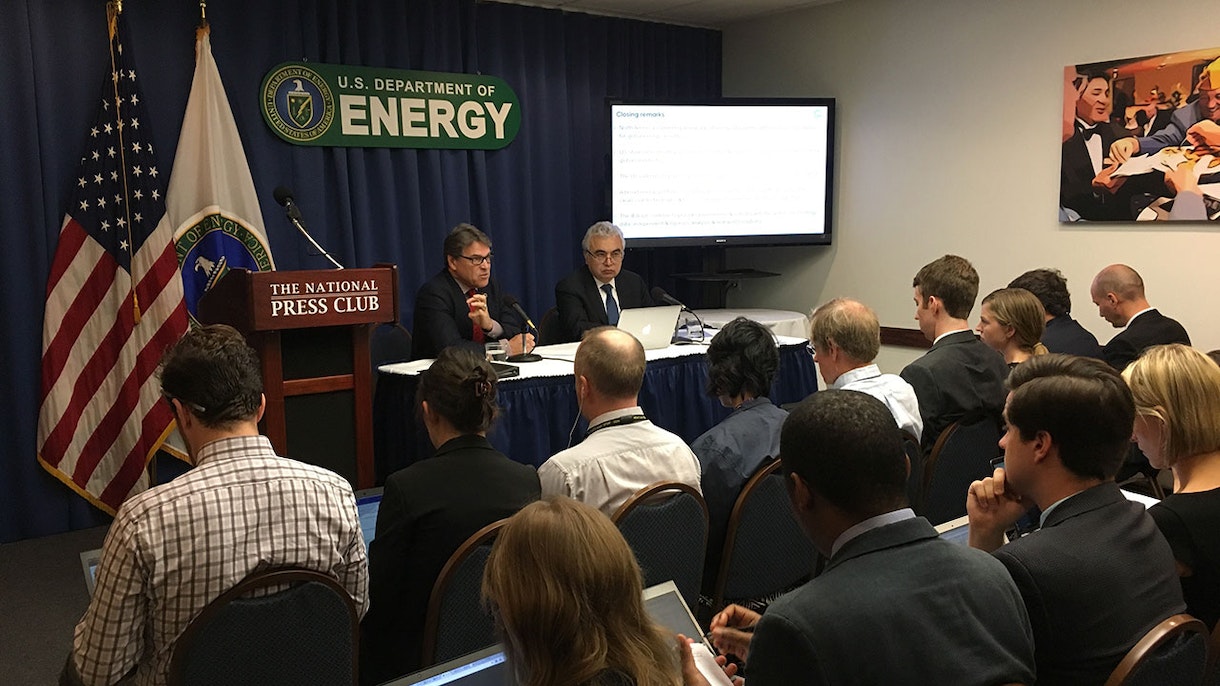 WASHINGTON — Dr Fatih Birol, the Executive Director of the International Energy Agency, held a joint press conference at the National Press Club with the US Secretary of Energy Rick Perry today where he presented the latest IEA analysis and findings, including on global energy investments in oil and natural gas markets.

“I have just returned from a trip to Mexico, where I discussed our goals for a new North American Energy Strategy,” Secretary Perry said in his opening remarks. “This Strategy will ensure security, stability, and economic growth for the United States, Mexico, and Canada.”

Secretary Perry added: “Although the IEA traces its origins to the oil crisis of 1973, today the agency plays a vital role in addressing the varied energy challenges we face in the 21st century.”

Following the remarks by Secretary Perry, Dr Birol spoke of the remarkable increase in shale oil and gas production in the United States.

“The United States stands today at the heart of a twin energy revolution: a booming shale oil and gas industry and also rising supplies of liquefied natural gas (LNG),” Dr Birol said during his presentation.

The IEA’s latest numbers show the United States is set to lead the growth in global oil supply over the coming five years.

Dr Birol also outlined the findings from Gas 2017, the IEA’s most recent natural-gas market forecast and analysis, which was released in New York last week. The IEA’s most recent data confirmed that a new milestone was reached in April when the United States became a net exporter of gas for the first time.

The United States – the world’s largest natural gas consumer and producer – will account for 40% of the world’s additional gas production in the next five years, according to the latest forecast in Gas 2017.

During the presentation, Dr Birol also highlighted that after two years of unprecedented declines in global upstream oil investment, there was no sign of a rebound in 2017. However, he noted that US shale producers remained the engine of upstream investment, with spending expected to jump by 53% this year.

Since 2010, almost $1 trillion in capital investment has been committed to oil and gas upstream activities in the United States, with an additional $200 billion dedicated to pipelines and other midstream assets – all of which contributes to creating new, well-paying domestic jobs.

This upstream investment wave — outlined in the IEA’s recent World Energy Investment 2017 — has had strong spillover effects. It played a major role in pulling the United States economy out of the financial crisis, since a substantial proportion of rigs, pipes, pressure pumps and other equipment are manufactured in the United States.

Dr Birol also pointed out that the United States had seen a massive increase in renewables generation in recent years. As a result, he said, the United States now has the second largest solar and wind markets globally.