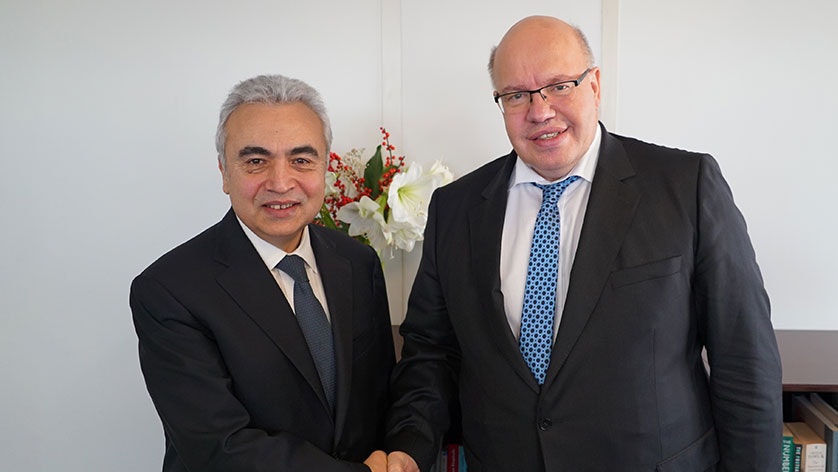 They discussed the Agency’s “open door policy to emerging countries,” the importance of energy efficiency and renewable, the growing importance of LNG markets in Europe and implications for Germany, and Germany’s energy transition.

Minister Altmaier and Dr Birol announced that they will co-chair a Ministerial Summit on flexibility and system integration in Berlin in September 2019, with the participation from ministers, industry CEOs and the financial community.

The IEA and the Federal Ministry of Economics and Technology (BMWi) enjoy a successful history of cooperation. Minister Altmaier congratulated Dr Birol on the remarkable success of the open-door policy, which brought eight new members in only three years (China, India, Brazil, Indonesia, South Africa, Morocco, Thailand, and Singapore). With a total of 38 member and association countries, the IEA family now accounts for almost 75% of global energy demand from 38% in 2015.

“We welcome their high interest in the IEA as well as the progress of the association initiative, especially with regards to concrete cooperation with these countries,” said Mr Altmaier. “Germany is looking forward to and continues to support further progress in association.”

Minister Altmaier provided an update on Germany’s Energiewende, its energy transition policy, and ongoing efforts to increase the flexibility of the German power system. He spoke of strengthening the north-south grid connection and better integrating electricity in the heat, transport and industrial sectors via electrification and production of green gases, as larger shares of variable renewable energy (VRE) are entering the system.

Germany is not alone in facing a rapid increase of wind and solar power. By 2023, the IEA forecasts that 33 countries will have up to 20% variable renewables in their power systems, up from 12 countries in 2017. In the long-term, World Energy Outlook 2018 – which included a special focus on electricity – sees variable renewables covering more than 20% of global power demand by 2040 in the central New Policies Scenario, and nearly 40% in the Sustainable Development Scenario.

“I am thrilled for the IEA to be partnering with Germany in this summit. The IEA has unparalleled experience in the field of system integration of renewables. We established a dedicated Unit on this in 2016 and are providing assistance to the IEA family on this topic across the globe”, Dr Birol said.

Mr Altmaier highlighted: “The issue of system integration of renewables is indeed of utmost relevance for our current energy policies. We would be happy to feed in our experience and expertise from the German point of view and co-host a high-level conference together with IEA. The IEA is uniquely positioned to focus on system integration. With its holistic view across the entire energy system and strong modelling capabilities, the IEA can assist countries in identifying strategies to transition their energy systems. Germany is very happy to promote this work – for example via the strong support we are providing to the IEA Clean Energy Transitions Programme”.

On a bilateral level, Minister Altmaier welcomed the IEA’s continuous support to the Energiewende, notably the upcoming in-depth energy policy review of Germany in 2019, with focus areas on energy efficiency and renewables, as well as sector coupling of renewable energy in heat, transport, and electricity.