Two-thirds of countries lacked mandatory building energy codes in 2018, meaning more than 3 billion m2 were built last year without mandatory performance requirements. To be in line with the SDS by 2030: all countries need to move towards mandatory building energy codes, high-performance new construction needs to increase from 250 million m2 to 4 billion m2, and deep energy efficiency renovation of existing stock needs to double to at least a 30-50% energy intensity improvement.

Constructed floor space in buildings worldwide has increased by 65% since 2000, reaching nearly 240 billion m2 in 2018. Yet, average energy use per m2 has declined by only 25%, meaning progress did not offset floor area growth.

Building envelope performance improvements are critical to achieve the Sustainable Development Scenario (SDS), but most countries have still not made them an explicit policy priority.

A wide range of building policy packages to improve building envelope performance was introduced in 2017 and 2018, but these measures were not enough to keep up with rapid growth in global floor area. In fact, most changes in 2017‑18 were updates in countries that already had energy codes. In addition, strength remains either limited or voluntary in most countries with codes in place.

For instance, India took a step forward in 2018 with development of its first national model building energy code for residential buildings.

The draft Energy Conservation Building Code for Residential Buildings was designed to be enforced simply while also improving occupant thermal comfort and enabling the use of passive systems. 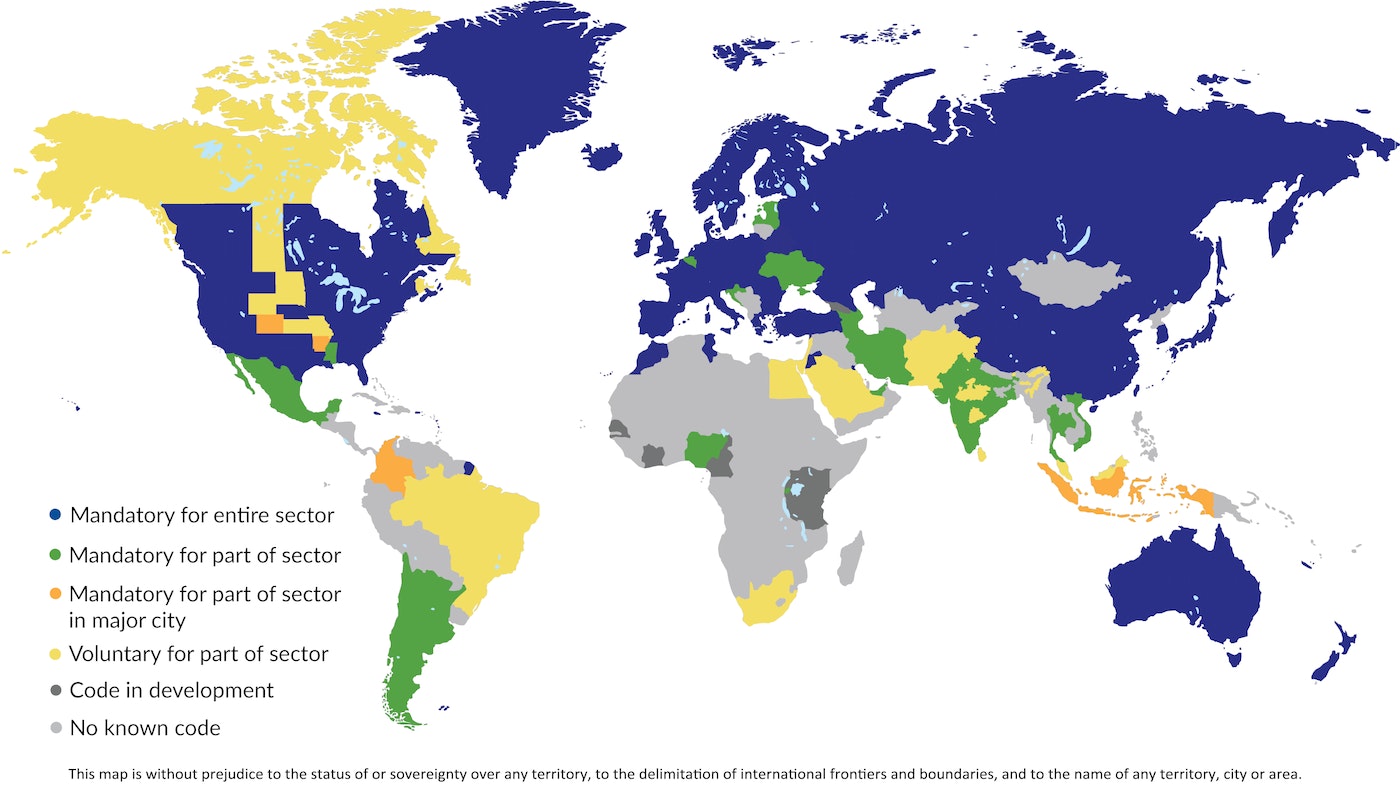 Less than a third of countries had building energy certifications in 2018. 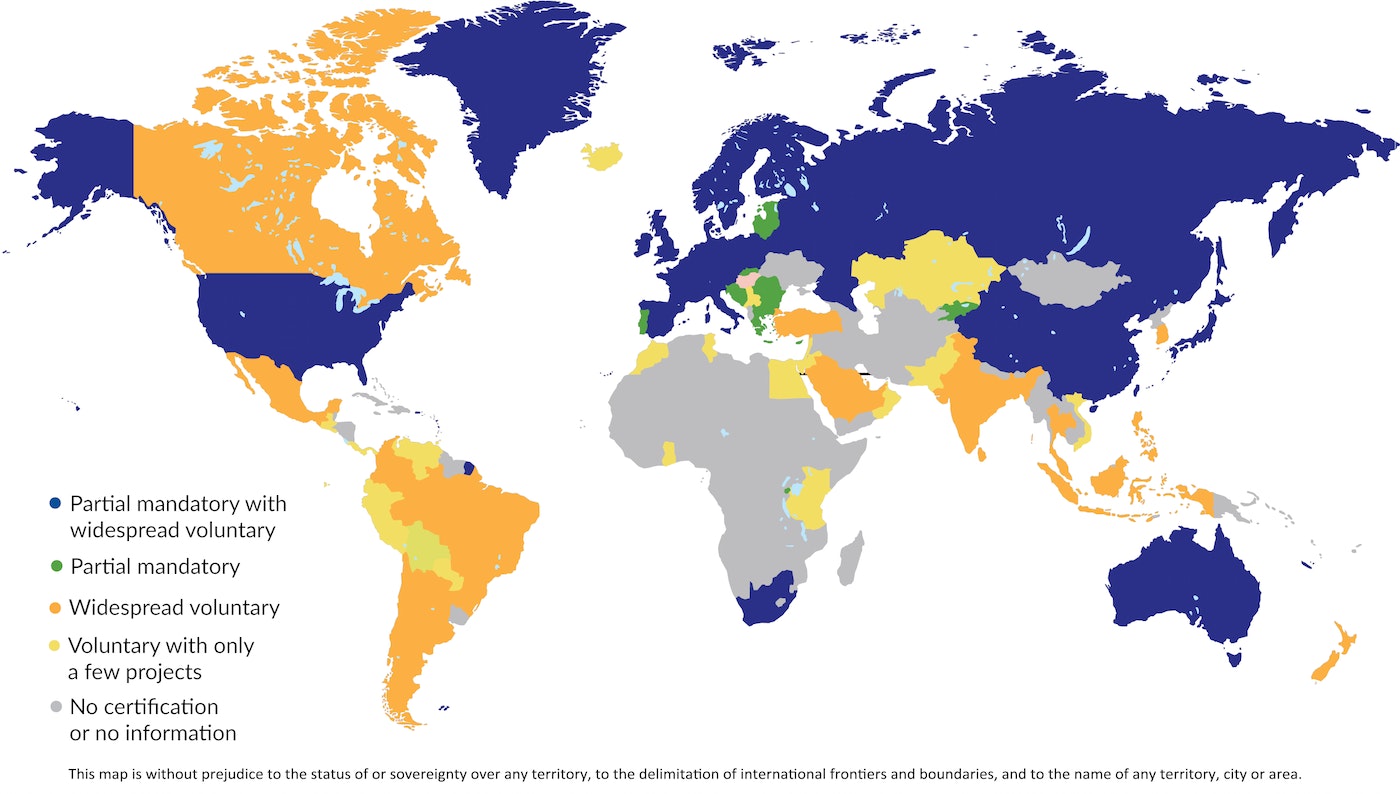 Nevertheless, building energy certifications still fall short of promoting major change in the buildings market, as they are typically voluntary or cover only a small number of buildings.

France is a leader in the nZEB market, with a building code that requires all new constructions to fall under its nZEB definition.

In Austria, Belgium and Italy, more than 20% of new residential constructions in 2018 were nZEBs.

The typical energy renovation rate is 1‑2% of the building stock per year, with average energy intensity improvements generally less than 15%.

One notable development was the expansion in 2017‑18 of the Energiesprong programme, which is now active in four countries – France, Germany, the Netherlands and the United Kingdom. This innovative initiative seeks to achieve affordable zero-energy building retrofits by leveraging private financing repaid through energy savings in public buildings.

Progress is being made on other fronts as well, such as the European Union’s revision of the European Performance of Buildings Directive in June 2018 to accelerate the renovation of existing buildings.

In 2017 the International Organization for Standardization (ISO) published its ISO 52000-1 standard for energy performance of buildings, which establishes a systematic and comprehensive structure for assessing building energy performance. But harmonisation is only one step towards the compulsory energy certification that is necessary.

Urgent steps to introduce, upgrade and enforce building energy codes are needed to achieve climate targets. They will need to accommodate rapid growth in the sector and improve thermal comfort in buildings without significantly raising energy demand and resultant emissions.

In advanced economies such as the United States and the European Union, buildings already standing today will likely make up a considerable share of the total stock to 2050.

Establishing large-scale refurbishment of buildings should therefore be a key policy priority in the coming decade. Greater effort needs to be focused on compiling a comprehensive and sound evidence base of technical and economic case studies, as well as pilot programmes that demonstrate actionable results.

Countries should set detailed market targets on building energy performance to send clear signals to industry and investors. This can be done by leading by example, such as requiring high-performance construction for new public buildings and offering financial incentives to encourage market uptake of high-performance solutions.

Governments can also support industry-led initiatives such as the Advancing Net Zero project by the World Green Buildings Council, which calls on businesses, organisations, cities, states and regions to reach net-zero carbon operating emissions by 2030 and to advocate for 100% net-zero carbon buildings by 2050.

Implementing high-performance construction and renovation packages will require improved access to financing and innovative business models that bring borrowers, lenders and regulators together.

Governments can enable this through policy interventions that shape market rules to improve access to financing and de-risk clean energy investment.

This can include the use of tax exemptions, grants, loans, auctions and obligations. Governments can also work with the finance sector, banks and investors, among others, to create a common classification scheme and solid evidence base for such investments.

Airtightness is a strong determinant of energy demand in buildings. In cold climates, exfiltration through the building envelope accounts for a significant share of a building's thermal losses. Infiltration of cold air can also cause mould and lead to material degradation, which affects the health of occupants and the lifetime of the building.

Windows are estimated to be responsible for 5‑10% of total energy consumed in buildings – and even higher for certain buildings (e.g. with all-glass facades). Highly insulated windows have great potential to reduce energy consumption in new buildings and in structural retrofits.

Integrated storage and renewable energy technologies for buildings (e.g. pairing clean energy production with local storage and energy use) can address multiple climate change mitigation objectives at once. One such solution is thermal energy storage, which can displace cooling and heating demand while also enabling higher penetration of variable renewable sources in the energy system. Integrated renewables (e.g. on a building's facade) can also enable greater energy production, as the related area usually is much larger than rooftop space.

In this publication, the IEA presents detailed scenarios and strategies to 2050, and demonstrates how to reach deep energy and emissions reductions through a combination of best available technologies and intelligent public policy.