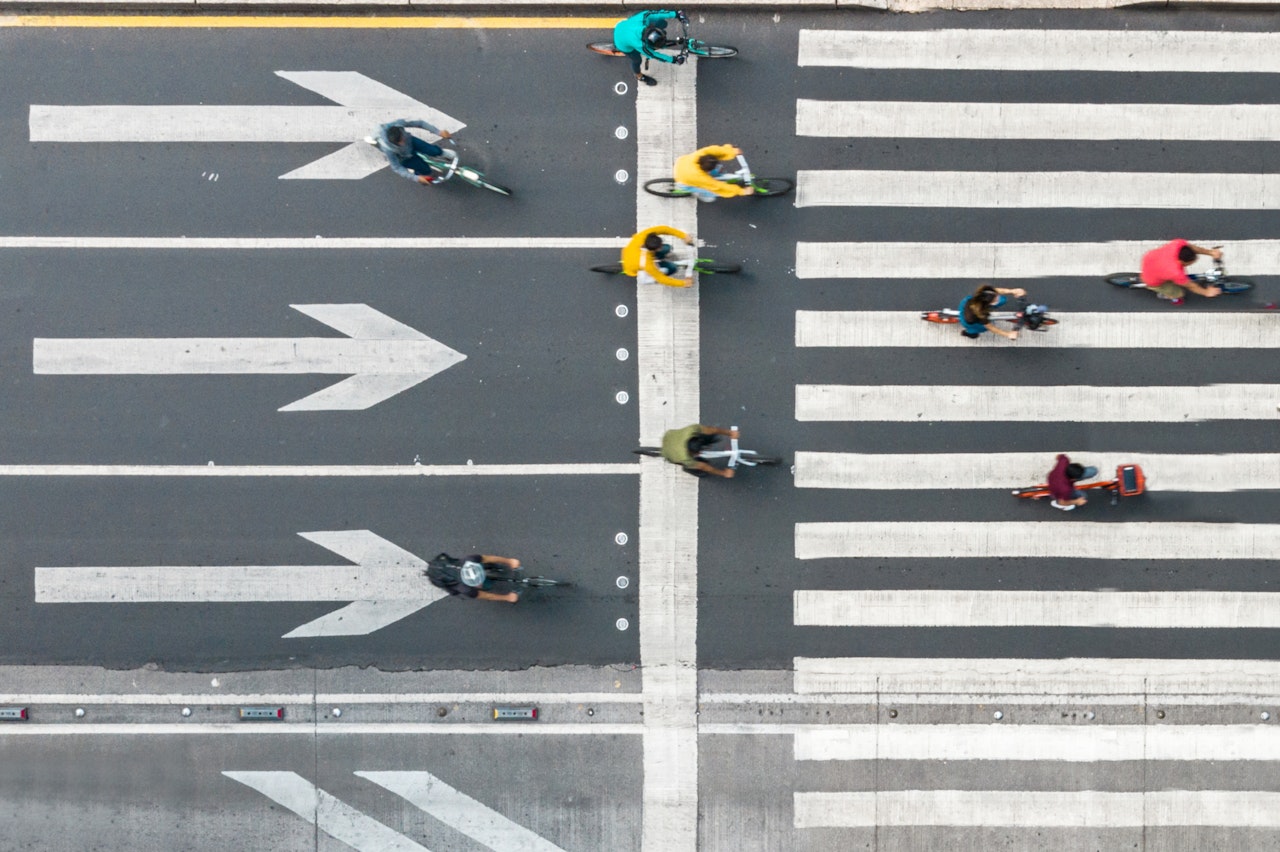 In the face of the emerging global energy crisis triggered by Russia’s invasion of Ukraine, the IEA’s 10-Point Plan to Cut Oil Use proposes 10 actions that can be taken to reduce oil demand with immediate impact – and provides recommendations for how those actions can help pave the way to putting oil demand onto a more sustainable path in the longer term. 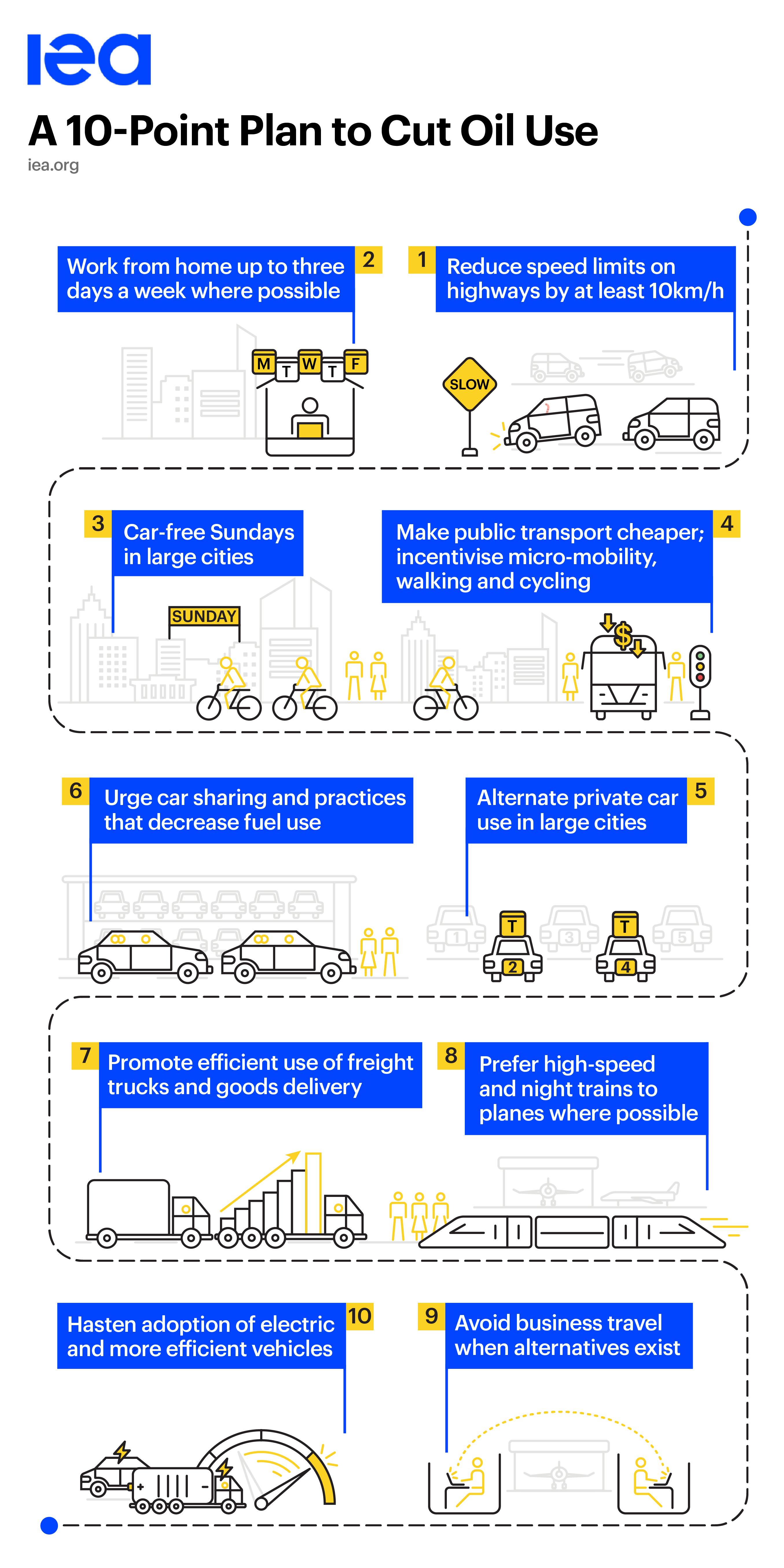 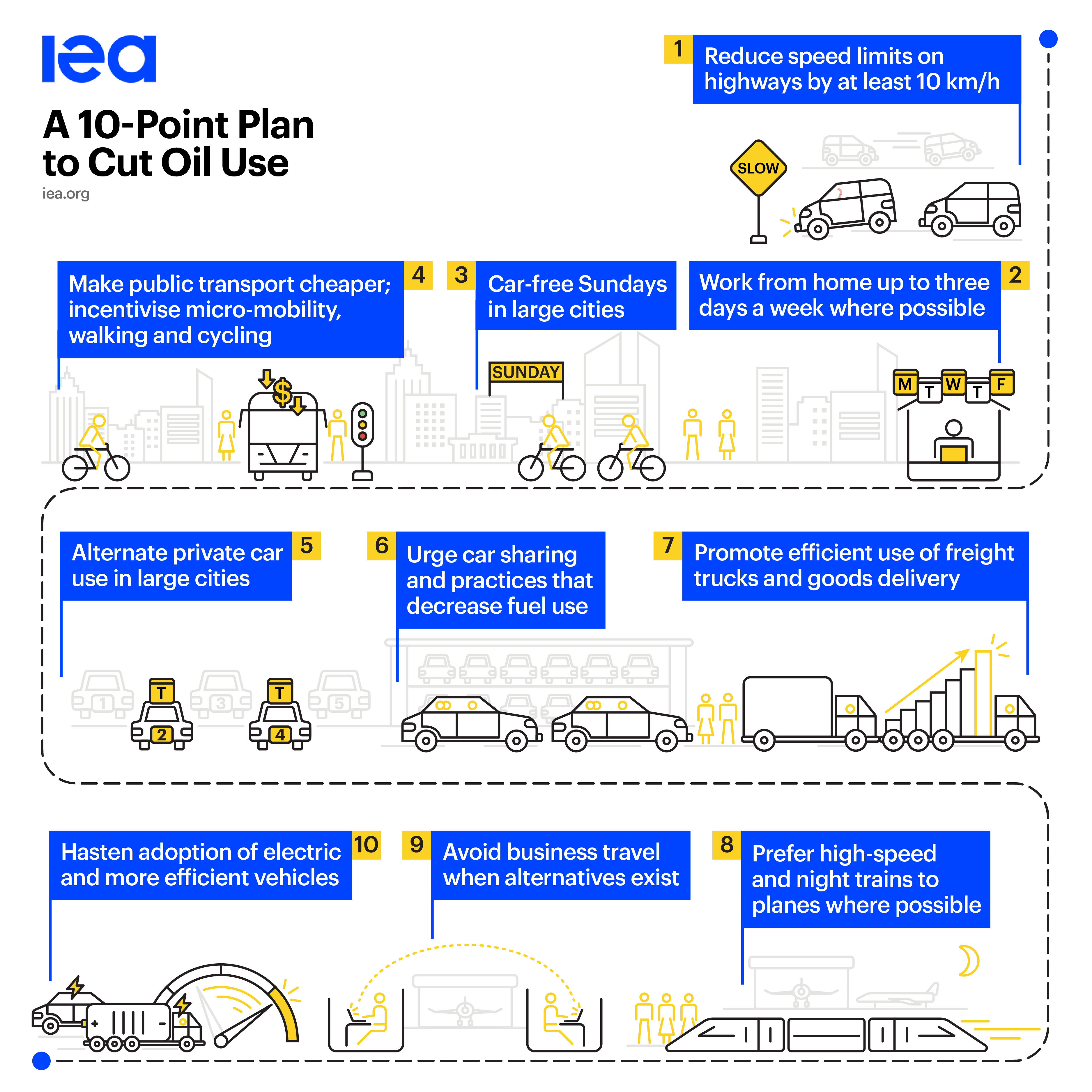 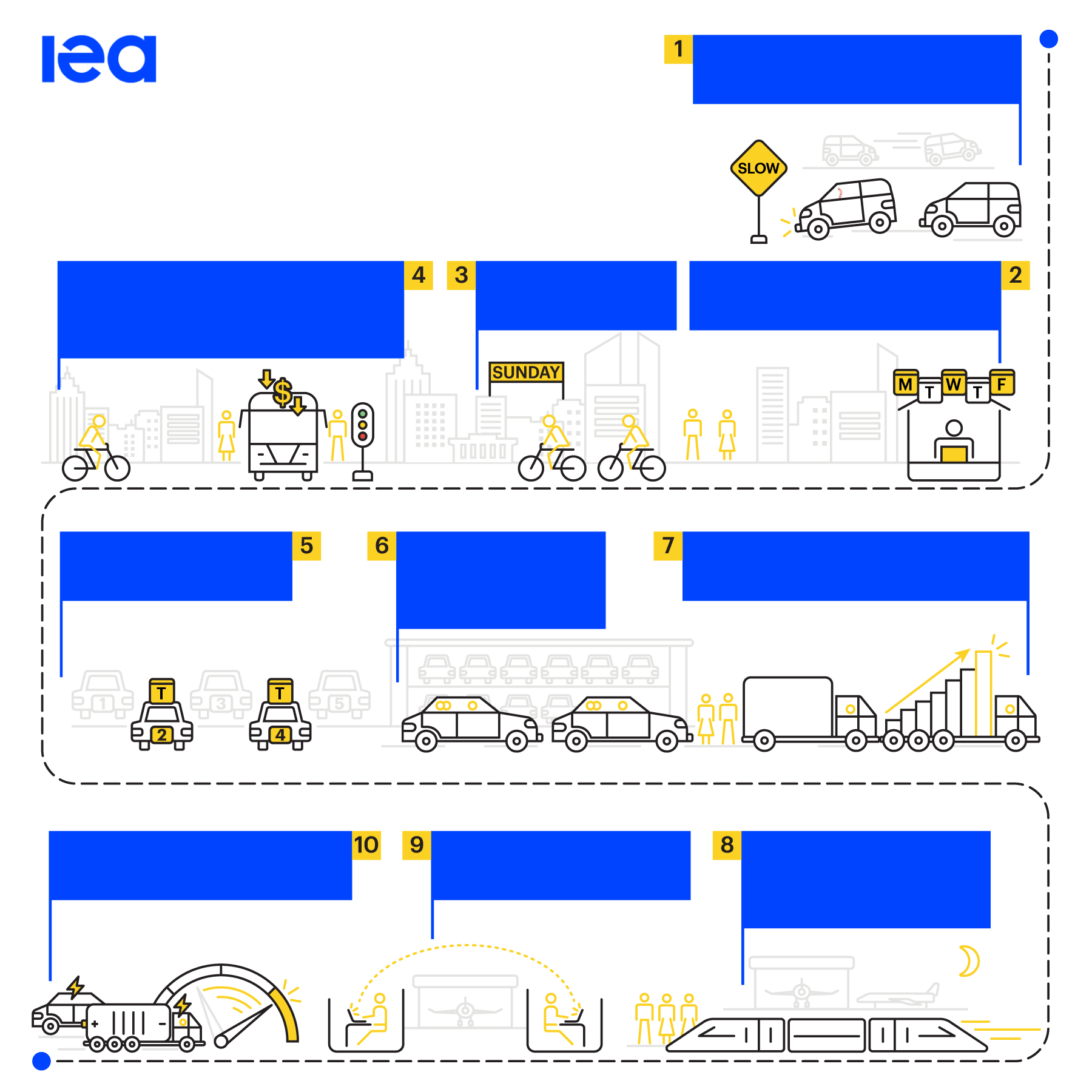 highways by at least 10 km/h

to Cut Oil Use

Work from home up to three

days a week where possible

use in large cities

Promote efficient use of freight

and night trains to

Russia’s invasion of Ukraine has thrown global commodity markets into turmoil. The global oil market – in which Russia is a major force – is one of the most heavily affected. Russia is the world’s third largest oil producer and the largest oil exporter.

Significant strains are showing in the global oil market, compounding difficulties in natural gas markets and creating a looming emergency for global energy security. Oil prices have swung violently since the Russian invasion, with the global benchmark nearing the all-time high of USD 150 per barrel at times, putting the still fragile and uneven global economic recovery at risk. The United States and Canada are banning imports of Russian oil while the United Kingdom has announced plans to do so by the end of the year. The IEA’s latest Oil Market Report on 16 March identified the potential for a shut-in of 2.5 million barrels a day of Russian oil exports starting from April; but losses could increase should restrictions or public condemnation escalate. A prolonged period of volatility for markets appears likely.

More than half of Russia’s oil exports go to Europe and around 20% go to China, but the market is global, meaning changes in supply and prices affect everyone. The increases in prices are being felt everywhere. Even if the price of oil on international markets has not so far risen as high as the all-time record reached in 2008, currency exchange rates mean that the price at the pump is at the highest level ever in some countries. On average, monthly spending on oil products for transport and heating in January and February rose by more than USD 40 per household (nearly 35%) in advanced economies, and nearly USD 20 per household (over 55%) in emerging and developing economies compared with last year’s levels. With the potential loss of large amounts of Russian supplies looming, there is a real risk that markets tighten further and oil prices escalate significantly in the coming months as the world enters the peak demand season of July and August. The risks are most acute – and already being felt in some cases – in market segments where Russia is a major supplier, such as diesel.

Immediate actions in advanced economies can cut oil demand by 2.7 million barrels a day in the next 4 months

Several governments are introducing measures to help consumers by reducing prices at the pump. Wherever possible, pricing measures should be designed carefully, prioritising the poorest parts of the population and those for whom cars are an indispensable part of their economic activity. Governments have a variety of tools that could be used, depending on the country context. For example, where taxes represent a large portion of prices for consumers, a temporary reduction in those levies or VAT can alleviate the extra burden on households. Direct payments are a means to target the poorest parts of the population.

Such measures, however, do not address the broader strains affecting the market. One way to do so is to increase supply. Spare capacity is available in some major producers outside Russia, but the disappointing outcome of recent OPEC+ discussions suggests limited willingness to provide immediate relief to the market. IEA member countries, as part of their collective response, unanimously agreed this month to draw on emergency stocks for an initial release of 62.7 million barrels, the largest stock release in IEA history. New oil production projects could increase liquidity in the market in the medium term but would not be able to ease the current strains. The oil industry’s stocks typically help balance the market when demand outweighs supply. But even before Russia’s invasion, the industry’s oil inventories were depleting rapidly. At the end of January, inventories in advanced economies were 335 million barrels below their five-year average and at eight-year lows.

Another way to help balance the market and reduce the pain caused by high oil prices is to bring down demand. Following Russia’s invasion of Ukraine, the IEA’s March Oil Market Report lowered its forecast for global oil demand in 2022 by 950 thousand barrels a day (kb/d) because of the expected impacts of higher prices and weaker GDP growth. But this would still leave the oil market very tight, with upward pressure on prices likely to remain in an uncertain geopolitical environment.

Further reductions in demand are possible in the near term, however, through actions by governments and citizens. The world’s advanced economies together account for around 45% of global oil demand, and most of them are members of the IEA. Demand restraint (see annex) is one of the emergency response measures that all IEA member countries are required to have ready as a contingency at all times – and that they can use to contribute to an IEA collective action in the event of an emergency.

In view of this and the potential emergency the world is facing, the IEA is proposing 10 immediate actions that can be taken in advanced economies to reduce oil demand before the peak demand season. We estimate that the full implementation of these measures in advanced economies alone can cut oil demand by 2.7 million barrels a day within the next four months, relative to current levels.1 The analysis in this report focuses on the potential effect of these measures in advanced economies, but their adoption in more countries would further increase their impact. Ensuring local and regional coordination of their implementation would maximise the impact.

Looking further ahead, this report also suggests a path for countries to put oil demand into structural decline in the medium term, building on measures already included in economic recovery packages introduced to deal with the impacts of the Covid-19 pandemic. Adopting the immediate and longer-term recommendations would put the countries on track for a decline in oil demand consistent with what is required to reach net zero emissions by 2050.

The majority of oil demand is in transport, so the proposed measures of the 10-Point Plan essentially focus on how we get from A to B. How these measures are implemented is subject to each country’s own circumstances – in terms of their energy markets, transport infrastructure, social and political dynamics, and other aspects.

The IEA stands ready to support all countries in designing and optimising measures to suit their respective circumstances. Government regulations and mandates have proven to be very effective for successfully implementing these measures in various countries and cities, while public information and awareness campaigns can serve as alternative or complementary measures. Ultimately, however, reducing oil demand does not depend solely on national governments. Several of the measures can be implemented directly by other layers of government – such as state, regional or local – or just voluntarily followed by citizens and companies, enabling them to save money while showing solidarity with the people of Ukraine and reducing greenhouse gas emissions.

Impact: Around 290 kb/d of oil use can be saved in the short term through a speed limit reduction of just 10 km/h on motorways for cars. A further 140 kb/d (predominantly diesel) can be saved if heavy trucks reduce their speed by 10 km/h.

1. Reduce speed limits on highways by at least 10 km/h

2. Work from home up to three days a week where possible

Impact: Avoids around 380 kb/d of oil use in the short term if implemented in large cities every Sunday. If only one Sunday per month, the amount drops to 95 kb/d.

Impact: Short-term measures where feasible and culturally acceptable can avoid around 330 kb/d of oil use.

4. Make the use of public transport cheaper and incentivise micro-mobility, walking and cycling

Impact: A reduction of around 210 kb/d of oil in the short term if alternate car access is applied on two days per week in large cities with good public transport options.

Impact: An increase of around 50% in the average car occupancy across advanced economies in 1-in-10 trips and adopting best-practices to decrease car fuel use can save around 470 kb/d of oil in the short term.

6. Increase car sharing and adopt practices to reduce fuel use

Impact: These measures can avoid around 320 kb/d of oil use in the short term.

7. Promote efficient driving for freight trucks and delivery of goods

Impact: Avoids around 40 kb/d oil use in the short term.

8. Using high-speed and night trains instead of planes where possible

Impact: Avoids more than 100 kb/d of oil use in the short term, building on expected sales of electric and more fuel-efficient cars over the next four months. Sustained action on supply chains and policy support can help secure further savings.

10. Reinforce the adoption of electric and more efficient vehicles

Reducing oil use must not remain a temporary measure. Sustained reductions are desirable in order not only to improve energy security but also to tackle climate change and reduce air pollution. Governments have all the necessary tools at their disposal to put oil demand into decline in the coming years, which would support efforts to both strengthen energy security and achieve vital climate goals.

Retaining those elements of this 10-Point Plan to which societies can more easily adapt and that consumers can integrate into their daily habits can help temper oil demand growth beyond the peak demand season. But governments must also consider accelerating their clean energy transitions and building on their net zero emissions strategies. To reach net zero emissions by 2050, oil demand in advanced economies in 2030 must be more than 15 million barrels a day lower than in 2021.

Many measures that accelerate clean energy transitions in oil-consuming sectors can have a material impact on oil use already over the next two to three years, even if their impact will be felt more strongly a few more years down the road. But decisions need to be taken now for them to materialise. We identify a set of key actions that can be taken now, prioritising those that can help advanced economies to put oil demand into a noticeable decline in the medium-term. The measures are lasting: more oil demand reductions can be expected for years to come, in line with the need to cut global oil use to reach net zero emissions by 2050. Key actions include:

Elements of this 10-Point Plan, combined with structural measures, can help put oil demand on a more sustainable path in the longer term

The assessed impacts on oil savings in the remainder of the document are presented for each individual measure in isolation. The total savings of 2.7 million barrels a day are calculated in a way that avoids double-counting of oil savings from different measures when their impacts may overlap.