Supplies of critical minerals essential for key clean energy technologies like electric vehicles and wind turbines need to pick up sharply over the coming decades to meet the world’s climate goals, creating potential energy security hazards that governments must act now to address, according to a new report by the International Energy Agency.

The special report, The Role of Critical Minerals in Clean Energy Transitions, is the most comprehensive global study to date on the central importance of minerals such as copper, lithium, nickel, cobalt and rare earth elements in a secure and rapid transformation of the global energy sector. Building on the IEA’s longstanding leadership role in energy security, the report recommends six key areas of action for policy makers to ensure that critical minerals enable an accelerated transition to clean energy rather than becoming a bottleneck.

“Today, the data shows a looming mismatch between the world’s strengthened climate ambitions and the availability of critical minerals that are essential to realising those ambitions,” said Fatih Birol, Executive Director of the IEA. “The challenges are not insurmountable, but governments must give clear signals about how they plan to turn their climate pledges into action. By acting now and acting together, they can significantly reduce the risks of price volatility and supply disruptions.”

“Left unaddressed, these potential vulnerabilities could make global progress towards a clean energy future slower and more costly – and therefore hamper international efforts to tackle climate change,” Dr Birol said. “This is what energy security looks like in the 21st century, and the IEA is fully committed to helping governments ensure that these hazards don’t derail the global drive to accelerate energy transitions.”

Demand outlooks and supply vulnerabilities vary widely by mineral, but the energy sector’s overall needs for critical minerals could increase by as much as six times by 2040, depending on how rapidly governments act to reduce emissions. Not only is this a massive increase in absolute terms, but as the costs of technologies fall, mineral inputs will account for an increasingly important part of the value of key components, making their overall costs more vulnerable to potential mineral price swings.

The commercial importance of these minerals also grow rapidly: today’s revenue from coal production is ten times larger than from energy transition minerals. However, in climate-driven scenarios, these positions are reversed well before 2040.

To produce the report, the IEA built on its detailed, technology-rich energy modelling tools to establish a unique database showing future mineral requirements under varying scenarios that span a range of levels of climate action and 11 different technology evolution pathways. In climate-driven scenarios, mineral demand for use in batteries for electric vehicles and grid storage is a major force, growing at least thirty times to 2040. The rise of low-carbon power generation to meet climate goals also means a tripling of mineral demand from this sector by 2040. Wind takes the lead, bolstered by material-intensive offshore wind. Solar PV follows closely, due to the sheer volume of capacity that is added. The expansion of electricity networks also requires a huge amount of copper and aluminium.

Unlike oil – a commodity produced around the world and traded in liquid markets – production and processing of many minerals such as lithium, cobalt and some rare earth elements are highly concentrated in a handful of countries, with the top three producers accounting for more than 75% of supplies. Complex and sometimes opaque supply chains also increase the risks that could arise from physical disruptions, trade restrictions or other developments in major producing countries. In addition, while there is no shortage of resources, the quality of available deposits is declining as the most immediately accessible resources are exploited. Producers also face the necessity of stricter environmental and social standards.

The IEA report provides six key recommendations for policy makers to foster stable supplies of critical minerals to support accelerated clean energy transitions. These include the need for governments to lay out their long-term commitments for emission reductions, which would provide the confidence needed for suppliers to invest in and expand mineral production. Governments should also promote technological advances, scale up recycling to relieve pressure on primary supplies, maintain high environmental and social standards, and strengthen international collaboration between producers and consumers.

In the most comprehensive global study yet, IEA shows need for government action to ensure reliable, sustainable supplies of elements vital for EVs, power grids, wind turbines and other key technologies

Minerals are essential components in many of today’s rapidly growing clean energy technologies – from wind turbines and electricity networks to electric vehicles. Demand for these minerals will grow quickly as clean energy transitions gather pace. This new World Energy Outlook Special Report provides the most comprehensive analysis to date of the complex links between these minerals and the prospects for a secure, rapid transformation of the energy sector. 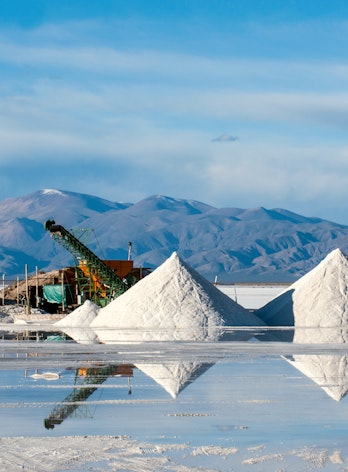 The Role of Critical Minerals in Clean Energy Transitions